Daphne du Maurier and the Gothic tradition. An introduction to Jamaica Inn. Daphne du Maurier, famous author of Rebecca, Jamaica Inn and Frenchman's Creek. Jamaica Inn: No place for a girl. I was 14 when I first stumbled upon them – pleasingly fat, bright yellow, cellophane-covered Gollancz hardbacks, which I carried home from Nottingham library. 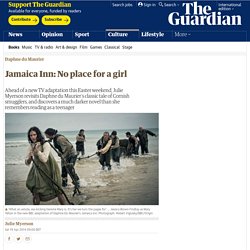 The pictureless covers with thick, red-and-black lettering were unapologetically, seductively adult. Jamaica Inn by Daphne Du Maurier – review. Smugglers Inn Cornwall, Daphne du Maurier. Launceston Then! Although there is at least one map showing Roman roads that cross Bodmin Moor following a path similar to the present A30’s route, up to the mid 18th century, there were very little decent routes across the moor barring an old packhorse track dating from Norman times. 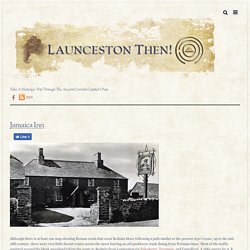 Most of the traffic squirted around the bleak moorland taking the route to Bodmin from Launceston via Egloskerry, Tresmeer, and Camelford. A 1684 survey by A. K. Everyday life in Cornwall captured in the 19th century – in pictures. The most incredible women in history from Plymouth - Plymouth Live. There are many reasons to be proud of our city, but when you see this list of all the amazing things these incredible women have achieved, you will realise just how much we have to brag about. 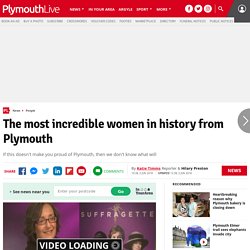 Back in the 1900's, many women were forbidden from doing things that we now carry out on a day-to-day basis. From not being able to vote until 1918, only getting equal divorce rights in 1923 and equal pay rights in 1968, to the sexual discrimination act being introduced in 1975. These remarkable females from Plymouth have achieved things that was once thought to be impossible, including the first full-time woman police officer right up to the first woman to be awarded the Military Cross. 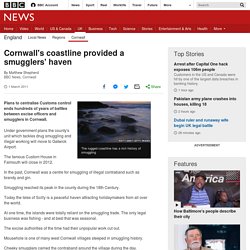 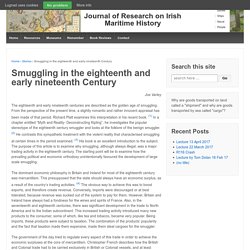 From the perspective of the present time, a slightly romantic and rather innocent appraisal has been made of that period. Richard Platt examines this interpretation in his recent book. (1) In a chapter entitled “Myth and Reality- Deconstructing Kipling”, he investigates the popular stereotype of the eighteenth century smuggler and looks at the folklore of the benign smuggler. (2) He contrasts this sympathetic treatment with the violent reality that characterised smuggling at certain times in the period examined. (3) His book is an excellent introduction to the subject. The purpose of this article is to examine why smuggling, although always illegal, was a major trading activity in the eighteenth century.

The starting point will be to examine how the prevailing political and economic orthodoxy unintentionally favoured the development of large scale smuggling. Gender roles in the 19th century. From marriage and sexuality to education and rights, Professor Kathryn Hughes looks at attitudes towards gender in 19th-century Britain. During the Victorian period men and women’s roles became more sharply defined than at any time in history. In earlier centuries it had been usual for women to work alongside husbands and brothers in the family business. Living ‘over the shop’ made it easy for women to help out by serving customers or keeping accounts while also attending to their domestic duties. As the 19th century progressed men increasingly commuted to their place of work – the factory, shop or office. BBC - History - Ideals of Womanhood in Victorian Britain. 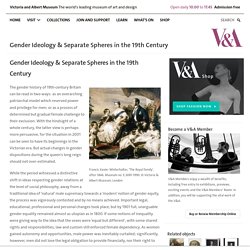 Museum no. E.3081-1990. © Victoria & Albert Museum, London The gender history of 19th-century Britain can be read in two ways: as an overarching patriarchal model which reserved power and privilege for men; or as a process of determined but gradual female challenge to their exclusion. Victorians: Daily Life. A Brief History of Gothic Romance. As a genre, gothic fiction was first established with the publication of Horace Walpole’s The Castle of Otranto in 1764. 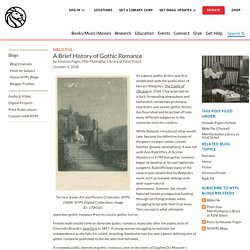 Characterized by a dark, foreboding atmosphere and outlandish, sometimes grotesque, characters and events, gothic fiction has flourished and branched off into many different subgenres in the centuries since its creation. While Walpole introduced what would later become the definitive tropes of the genre (creepy castles, cursed families, gloomy atmosphere), it was not until Ann Radcliffe’s A Sicilian Romance in 1790 that gothic romance began to develop as its own legitimate subgenre. Radcliffe kept many of the same tropes established by Walpole’s work, such as isolated settings with semi-supernatural phenomena; however, her novels featured female protagonists battling through terrifying ordeals while struggling to be with their true loves.

This concept is what ultimately separates gothic romance from its cousin, gothic horror. Early Gothic Victorian Gothic Modern. Echoes in Gothic Romance: Stylistic Similarities Between "Jane Eyre" and "Rebecca" When Daphne DuMaurier's acclaimed Gothic romance novel Rebecca debuted in 1938, it was devoured by the female readers of its day. 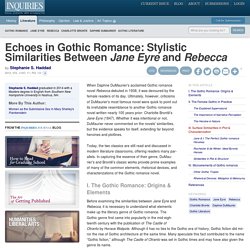 Ultimately, however, criticisms of DuMaurier's most famous novel were quick to point out its irrefutable resemblance to another Gothic romance novel written nearly 100 years prior: Charlotte Brontë's Jane Eyre (1847). Whether it was intentional or not, DuMaurier never commented on the novels' similarities, but the evidence speaks for itself, extending far beyond heroines and plotlines. Gothic novel. Gothic novel, European Romantic pseudomedieval fiction having a prevailing atmosphere of mystery and terror. 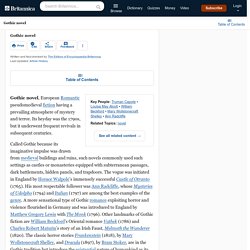 12 Great Books to Read to Understand Periods in Literature. Women better represented in Victorian novels than modern, finds study. Women in novels have tended to “feel”, while men “get”; women smile or laugh, while men grin or chuckle. 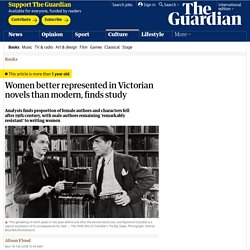 An analysis of more than 100,000 novels spanning more than 200 years shows how gendered even seemingly innocuous words can be – as well as revealing an unexpected decline in the proportion of female novelists from the mid-19th to the mid-20th century. Academics from the universities of Illinois and California at Berkeley used an algorithm to examine 104,000 works of fiction dating from 1780 to 2007, drawn mostly from HathiTrust Digital Library.

The algorithm identified both author and character genders. The academics expected to see an increase in the prominence of female characters in literature across the two centuries. Literary Periods Timeline. Reading literary fiction improves empathy, study finds. Have you ever felt that reading a good book makes you better able to connect with your fellow human beings? If so, the results of a new scientific study back you up, but only if your reading material is literary fiction – pulp fiction or non-fiction will not do. The study of novels and poetry is essential for senior secondary students. Gender, Race, and Class in Media: A Critical Reader. The importance of multicultural literature. Australian primary schools are more culturally diverse now than ever before.

By including multicultural literature in the school library fiction collection, teacher librarians ensure they provide their students with texts that represent the culturally diverse classrooms and home environments in this country, and those across the globe. With recent global events, it has become increasingly important that students do not become ethnocentric.

Exposure to a variety of multicultural literature can assist in breaking down cultural barriers.