Songs in the Key of Life 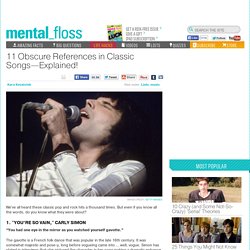 But even if you know all the words, do you know what they were about? 1. "You’re So Vain," Carly Simon “You had one eye in the mirror as you watched yourself gavotte.” The gavotte is a French folk dance that was popular in the late 16th century. 2. “Some people call me Maurice, ‘cause I speak of the pompatus of love.” “Pompatus” is, indeed, a made-up word, but Mr. 3, 4, and 5. “Traveling in a fried-out Kombi” ... This tune is full of Australian slang, which is what made much of it indecipherable to those of us above the Equator. Vegemite is an Aussie favorite—a spreadable paste made from brewer’s yeast, vegetables, wheat, and some assorted spices.

Chunder is what a lot of folks do after consuming too much beer, or other alcohol, or spoiled food, or during a bout of the flu. Music.

Musica Montage. New Musica. Lively Venues. Rock'n'Roll. Cymatica. OSCILLATORIUM. Quotatio. Playing For Change. A song for the day. World Forum for Acoustic Ecology. Guido of Arezzo. Statue of Guido in Arezzo Guido of Arezzo's house with plaque Guido was a monk of the Benedictine order from the Italian city-state of Arezzo. 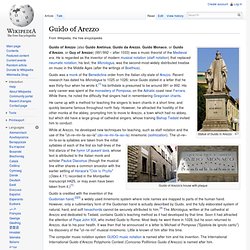 Recent research has dated his Micrologus to 1025 or 1026; since Guido stated in a letter that he was thirty-four when he wrote it,[1] his birthdate is presumed to be around 991 or 992. His early career was spent at the monastery of Pomposa, on the Adriatic coast near Ferrara. While there, he noted the difficulty that singers had in remembering Gregorian chants. Guido is credited with the invention of the Guidonian hand,[2][3] a widely used mnemonic system where note names are mapped to parts of the human hand. The computer music notation system GUIDO music notation is named after him and his invention. See also[edit] References[edit] External links[edit] Stevie Wonder Official Site. Bob Dylan Songs. Cowboy Junkies. Lee Harvey Osmond and The Good Family nominated for Sirius XM Indie Awards We're excited to announce that two Latent artists have been nominated for 2014 Sirius XM Indie awards: Lee Harvey Osmond in the Roots Category and The Good Family in the Country Category. 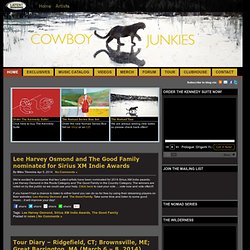 The winners are voted on by the public so we could use your help. Click here to cast your vote…..vote now and vote often!!! Find Music From TV and Movies. We Got The Solution! A Flashpoint Blog. Find Songs from the Latest Movies. All Shows - TV Show Music. The Luncheonette Recording Studio. Parenthood. Music Archives. Discover Music Online: The Ultimate Collection for Music Lovers » Life-Changing Arts. If you love to discover new music, explore or simply play (with) music, these are the websites that will most successfully and easily help you accomplish just that: The best music websites available online! 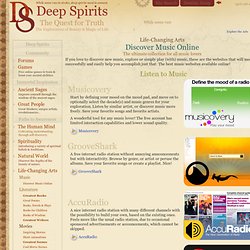 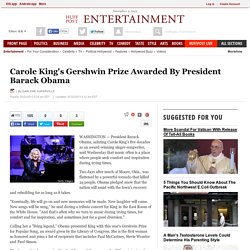 Two days after much of Moore, Okla., was flattened by a powerful tornado that killed 24 people, Obama pledged anew that the nation will assist with the town's recovery and rebuilding for as long as it takes. "Eventually, life will go on and new memories will be made. New laughter will come. New songs will be sung," he said during a tribute concert for King in the East Room of the White House. "And that's often why we turn to music during trying times, for comfort and for inspiration, and sometimes just for a good diversion. " Calling her a "living legend," Obama presented King with this year's Gershwin Prize for Popular Song, an award given by the Library of Congress.