Why children absorb more microwave radiation than adults: The consequences. Weekend Projects - A Touchless 3D Tracking Interface. Augmented Reality Glasses (ARGs) – The Reality of the Future. There has been a lot of talk about Google Glass recently. 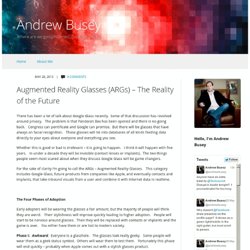 Five ways to save a Web page. The devices we all rely on continue to evolve radically. 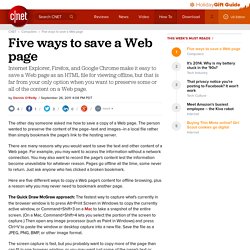 So why has the battery industry failed? Here's how you can take charge. When Apple redesigned the MacBook Pro in 2009, it unveiled a new type of battery that ran a whopping 40 percent longer than the previous model. Technical Illusions. Best display for outdoor use comparison: Samsung Galaxy S5 vs HTC One M8 vs Apple iPhone 5s vs Note 3 vs the rest. Summer is right around the corner and what this means is more time spent outdoors, be it for vacations at the beach, by the swimming pool, or just for a walk. 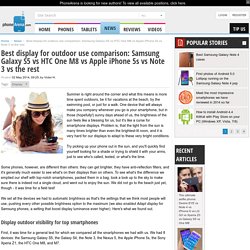 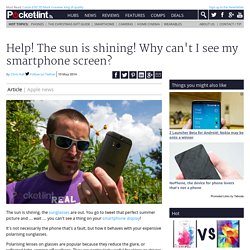 You go to tweet that perfect summer picture and … wait … you can't see a thing on your smartphone display! Wireless Phone Use Increases Malignant Brain Tumour Up to Four-Fold. ISIS Report 12/11/2014 Frequent use of mobile and cordless phone link to malignant brain tumour confirmed in new comprehensive analysis based on the largest number of cases in Sweden; 3G phones more damaging than 2G, and children more at risk; “current guidelines for exposure should be urgently revised”Dr Mae-Wan Ho Please circulate widely and repost, but you must give the URL of the original and preserve all the links back to articles on our website. 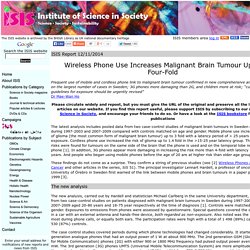 If you find this report useful, please support ISIS by subscribing to our magazine Science in Society, and encourage your friends to do so. Smartphones are Smarter with an All-In-One Processor. The performance of your smartphone is influenced by many factors, including the operating system, manufacturer, and wireless carrier. 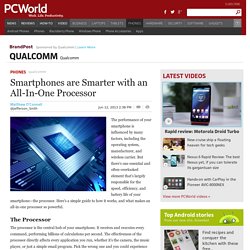 LLC. - Mobile > Home. Three things you need to know about the phone Amazon is launching this week. The Amazon phone is coming. 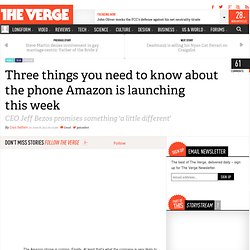 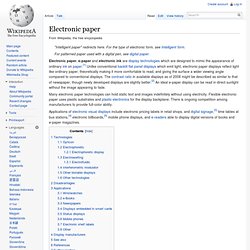 The contrast ratio in available displays as of 2008 might be described as similar to that of newspaper, though newly developed displays are slightly better.[2] An ideal e-paper display can be read in direct sunlight without the image appearing to fade. Many electronic paper technologies can hold static text and images indefinitely without using electricity. Flexible electronic paper uses plastic substrates and plastic electronics for the display backplane. There is ongoing competition among manufacturers to provide full-color ability. Technologies[edit] E Ink. This article is about a proprietary brand of electronic paper. 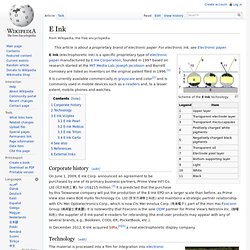 For electronic ink, see Electronic paper. Scheme of the E Ink technology. E Ink (electrophoretic ink) is a specific proprietary type of electronic paper manufactured by E Ink Corporation, founded in 1997 based on research started at the MIT Media Lab. Joseph Jacobson and Barrett Comiskey are listed as inventors on the original patent filed in 1996.[1] It is currently available commercially in grayscale and color[2] and is commonly used in mobile devices such as e-readers and, to a lesser extent, mobile phones and watches.

Corporate history[edit] Technology: Display Products. Double Robotics - Wheels for your iPad. One Sim Card To Rule Them All: Ukko Mobile From Helsinki Eliminates Data Roaming Forever. So you have accidentally enabled data roaming while travelling and your iPad started syncing. 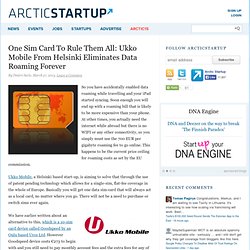 Soon enough you will end up with a roaming bill that is likely to be more expensive than your phone. At other times, you actually need the internet while abroad but there is no WIFI or any other connectivity, so you simply must use the 700 EUR per gigabyte roaming fee to go online. Haptix: Multitouch Reinvented by Haptix Touch. Update 1: Announcing the $150,000 Stretch Goal: Pressure Sensitivity. Learn more here! Update 2: Haptix: both a mouse and a... keyboard? Check it out here! Update 3: Design in 3D or play first-person games with only your fingers! Check out some awesome videos of Haptix! Blackphone: A Phone for the Age of Snowden. Around midnight on Tuesday of last week, people near the barricaded city square at the center of mass protests in Kiev, Ukraine, received an ominous text message: “Dear subscriber, you are registered as a participant in a mass disturbance.”

The message was most likely sent by the Ukrainian government using what’s popularly known as an “I.M.S.I. catcher”—a controversial tool that disguises itself as a cell-phone tower so that nearby devices connect to it, revealing their locations and serial numbers and, sometimes, the contents of outgoing messages. It was a bleak reminder of how cell phones, one of the past decade’s most indispensable and ubiquitous pieces of technology, can silently leave their owners exposed to governments and high-tech criminals. A number of companies have emerged in the post-Snowden world peddling products that claim to protect from that kind of unwanted surveillance. Still, Silent Circle has seen its subscriber base expand since the Snowden revelations.

From Search Engines to Smartphones, Technology Gets a Privacy Overhaul. As the reach of the Internet has grown, so has the medium’s favored business model: targeted advertising. Signals recording our activity are harvested as we browse the Web and, increasingly, as we use our smartphones. That information is used to build profiles that help advertisers target ads, and opting out is rarely easy. Some small companies are now redesigning smartphones and Web browsers to give people more control over that kind of data collection.

Some Mobile Apps Add Anonymity to Social Networking. For just over a decade, Facebook has enforced the idea of an authentic online identity tied to each user of a social network. This might be fine for sharing news of a promotion or new baby with friends, but sometimes you’d probably like to post a status update that won’t go on your permanent record. This urge might explain why millions of people, many of them under the age of 25, are flocking to a free smartphone app called Whisper, which lets you share thoughts—a few lines of text set against a background image—without adding your real name. Secret, a newer free app for the iPhone that shares posts anonymously through your existing social networks, is based on the same idea.

After years spent filling social networks like Facebook and Twitter with the minutiae of our lives, we’ve left permanent, heavily curated trails of personal data in our wake—over 1.2 billion of them on Facebook alone, judging by its user count. Facebook, at least, may be taking that step soon. Argument Writing Cell Phones. The Effects of Cell Phone Conversations on the Attention and Memory of Bystanders.

Eye-Control Comes To Tablet Devices. The Stupid Things You Do With Your Smartphone (and How to Fix Them) Here's the Right Way to Rescue a Soaking Wet Smartphone. Dessicate Your Gadgets With the Bheestie Bag. Wet Electronics, How to Dry Out Electronics, How to Dry a Cell Phone - DRY ALL. DryBox. The DryBox Rescue system utilizes a patent-pending drying chamber as part of a process that rapidly removes moisture at the molecular level from small electronic devices including cell phones, mp3 players, cameras, GPS units, etc. Support - iPad. Pre-Order 3Doodler - 3Doodler.