Massachusetts, The people of Massachusetts have always stood up for their right to repair. 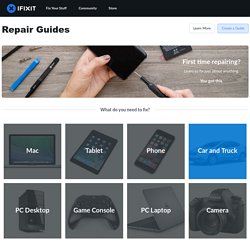 In 2012, voters passed a law that ensured residents' right to repair their car wherever they wanted. Now, it's time to do the same for electronics. With the Digital Right to Repair Bill, H.3383, we have a chance to guarantee our right to repair electronics — like smartphones, computers, and even farm equipment. We have a chance to help the environment and stand up for local repair jobs—the corner mom-and-pop repair shops that keep getting squeezed out by manufacturers. The Digital Right to Repair Bill requires manufacturers to provide owners and independent repair businesses with fair access to service information, security updates, and replacement parts. Free Tech Support. IT Certifications and Exams - Home. Customize.org - Download Themes, Skins, Wallpapers and Icons for Windows from the original skin site! How to Report Bugs Effectively. There are a number of ways in which non-programmers can contribute to software projects; documentation and testing are among the most frequently-requested services, but testing that results in useless bug reports accomplishes nothing but frustrating the programmer. 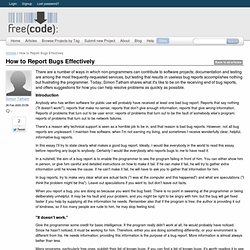 Today, Simon Tatham shares what it's like to be on the receiving end of bug reports, and offers suggestions for how you can help resolve problems as quickly as possible. Introduction Anybody who has written software for public use will probably have received at least one bad bug report. Reports that say nothing ("It doesn't work! "); reports that make no sense; reports that don't give enough information; reports that give wrong information. There's a reason why technical support is seen as a horrible job to be in, and that reason is bad bug reports. In this essay I'll try to state clearly what makes a good bug report. In a nutshell, the aim of a bug report is to enable the programmer to see the program failing in front of him. 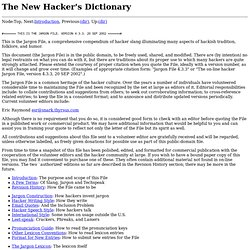 This document (the Jargon File) is in the public domain, to be freely used, shared, and modified. There are (by intention) no legal restraints on what you can do with it, but there are traditions about its proper use to which many hackers are quite strongly attached. Please extend the courtesy of proper citation when you quote the File, ideally with a version number, as it will change and grow over time. Speedtest.net - The Global Broadband Speed Test. Sidr - A jQuery plugin for creating side menus. You will be able to create multiple sidrs on both sides of your web to make responsives menus (or not, it works perfectly on desktop too). 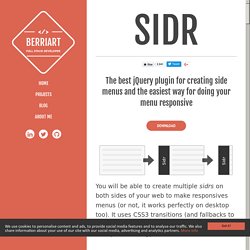 It uses CSS3 transitions (and fallbacks to $.animate with older browsers) and it supports multiple source types. Get started Like any other plugin, you must include it after the jQuery script. For a better performance load them at the bottom of your page or in an asynchronous way. You have to include a Sidr Theme stylesheet too, choose between the dark or the light one, or if you prefer create one by your own. The one file kanban board application. Technipages – Smartphone, gadget and computer tips. Gina Trapani, tech writer and web developer - The Official Web S. Text Slang - Chat Acronyms - IM Chat. The Hacker's Dictionary.

Welcome to The Hacker's Dictionary, a comprehensive compendium of hacker slang illuminating many aspects of hackish tradition, folklore, and humor. 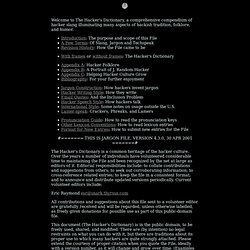 Introduction: The purpose and scope of this File A Few Terms: Of Slang, Jargon and Techspeak Revision History: How the File came to be With frames or without frames: The Hacker's Dictionary Appendix A: Hacker Folklore Appendix B: A Portrait of J. Random Hacker Appendix C: Helping Hacker Culture Grow Bibliography: For your further enjoyment Jargon Construction: How hackers invent jargon Hacker Writing Style: How they write Email Quotes: And the Inclusion Problem Hacker Speech Style: How hackers talk International Style: Some notes on usage outside the U.S.

The New Hacker's Dictionary. Cyclic code. In coding theory, a cyclic code is a block code, where the circular shifts of each codeword gives another word that belongs to the code. 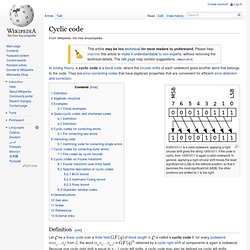 They are error-correcting codes that have algebraic properties that are convenient for efficient error detection and correction. If 00010111 is a valid codeword, applying a right circular shift gives the string 10001011. If the code is cyclic, then 10001011 is again a valid codeword. In general, applying a right circular shift moves the least significant bit (LSB) to the leftmost position, so that it becomes the most significant bit (MSB); the other positions are shifted by 1 to the right. Definition[edit] Quadratic residue code. A quadratic residue code is a type of cyclic code. 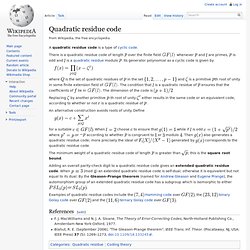