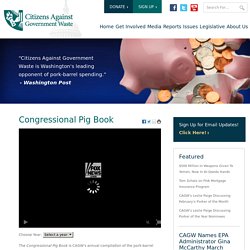 While a single earmark violates the moratorium, at least the number and cost of the earmarks contained in H.R. 3547, the Consolidated Appropriations Act, 2014, decreased from FY 2012, the last time Congress passed the spending bills. Earmark totals dropped by 28.3 percent, from 152 in FY 2012 to 109 in FY 2014, while the cost declined by 18.2 percent, from $3.3 billion in FY 2012 to $2.7 billion in FY 2014, the lowest amount since 1992. The costs in both 2012 and 2014 are significant reductions from the record $29 billion in earmarks set in FY 2006. The 2012 Pig Book noted that although there were fewer earmarks than in prior years, the projects involved larger amounts of money and included fewer details.

Home - Get Money Out Action. Lobbying. Shmoop Finance. Other Moolah. Capitalism simply isn't working and here are the reasons why. Thomas Piketty has mined 200 years of data to support his theory that capitalism does not work. 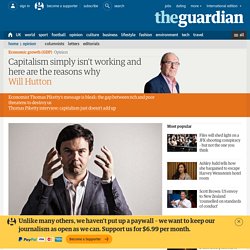 Photograph: Ed Alcock for the Observer. New Busyness. What's the ultimatum game? Giving. CrowdFunDing. Global Property Guide. Promiscuous Inflation  By Mortimer Duke (June 2011) Most people are surprised to hear that the word promiscuous has no sexual connotation on its own. 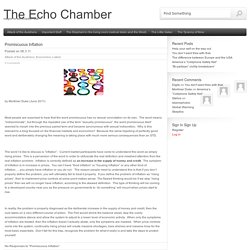 The word means “indiscriminate”, but through the repeated use of the term “sexually promiscuous”, the word promiscuous itself seemed to morph into the previous paired term and became synonymous with sexual indiscretion. Why is this relevant to a blog focused on the financial markets and economics? Government debt explained (in a few minutes) Blaming Capitalism for Corporatism - Edmund S. Phelps and Saifedean Ammous. Exit from comment view mode. 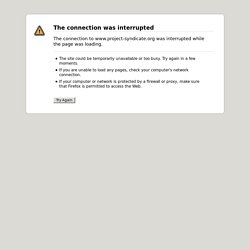 Click to hide this space NEW YORK – The future of capitalism is again a question. Will it survive the ongoing crisis in its current form? AP Macroeconomics - PavaforPresident2016. Moneychimp: learn Stock Investing, Index Funds, Valuation Models, and more. Preparing for Economic Depression in a Culture of Make-Believe. This article first appeared in Spirit of the Times, May 2012. 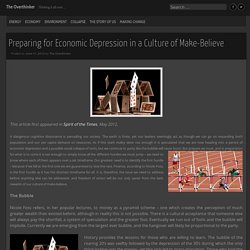 A dangerous cognitive dissonance is pervading our society. The earth is finite, yet our leaders seemingly act as though we can go on expanding both population and our per capita demand on resources. As if this stark reality were not enough it is speculated that we are now heading into a period of economic depression and a possible social collapse of sorts, but we continue to party like the bubble will never burst. LBJ’s War On Poverty An Expensive Failure That Never Ends. Geez, it’s been 50 years since Lyndon Johnson launched his “war on poverty” and the war never ends. 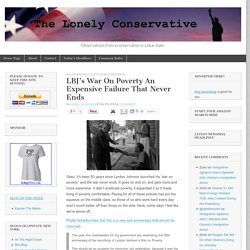 It goes on and on, and gets more and more expensive. It didn’t eradicate poverty, it expanded it as it made living in poverty comfortable. Paying for all of these policies has put the squeeze on the middle class, so those of us who work hard every day aren’t much better off than those on the dole. Heck, some days I feel like we’re worse off. LBJ's War On Poverty Turned Hope Into Despair, Dependency. Lessons-in-Spiritual-Economics-Part-1. 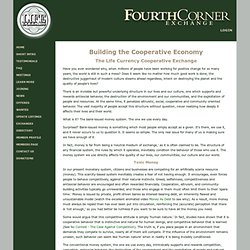 Triple Entry Accounting. I wrote the following article in 1994 while working on my Masters degree. 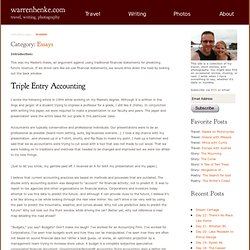 Although it is written in the lingo and jargon of a student trying to impress a professor for a grade, I still like it (hehe). In conjunction with writing this paper, we were required to make a presentation to our faculty and peers. The paper and presentation were the entire basis for our grade in this particular class. [PDF] Accounting in three dimensions — a case for momentum revisited.pdf. A Quick Note on Wealth and Balance Sheet Debates. I still like using my map for understanding why people disagree on the best course of action on getting the economy going even if they are in agreement that something needs to be done. 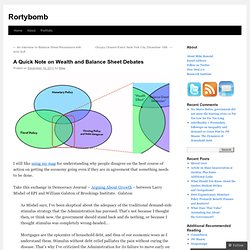 Take this exchange in Democracy Journal – Arguing About Growth – between Larry Mishel of EPI and William Galston of Brookings Institute. Galston: As Mishel says, I’ve been skeptical about the adequacy of the traditional demand-side stimulus strategy that the Administration has pursued. That’s not because I thought then, or think now, the government should stand back and do nothing, or because I thought stimulus was completely wrong-headed… Mortgages are the epicenter of household debt, and thus of our economic woes as I understand them.

Origins of the Financial Mess. Analysis of 2008 Collapse Shows Economy Networked for Failure. A new study of the 2008 collapse has joined economics and network theory in a graphic depiction of inevitable failure. 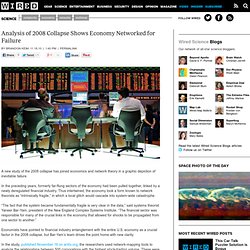 In the preceding years, formerly far-flung sectors of the economy had been pulled together, linked by a newly deregulated financial industry. Thus intertwined, the economy took a form known to network theorists as “intrinsically fragile,” in which a local glitch would cascade into system-wide catastrophe. Deflation poses danger to business. Deflation is a fact of life in Japan.

In the past 10 years, consumer prices have tumbled, real estate values have plummeted and banks -- unable to collect their loans -- have been driven to insolvency or into forced mergers with stronger partners. Back in the spring, there was a lot of worry that deflation would lurk at Canada's shores as a sort of economic grim reaper. Ellen Brown on Deficits Don't Matter. This is a pretty decent article on the intricacies of public finance and made pretty easy to understand. The reader needs to be able to get his perceptions turned upside down though. What is important is to understand that much as passes for financial wisdom or at least self evident is wrong. If it helps, it is enough to remember that a dollar bill is created by an act of government, sent forth as expenditure in a multiple of ways and it is then taxed back at sometime in the future. This dynamic process produces the money supply. Understanding the Ruling Elite. The elite are trusted placeholders sitting atop hierarchical structures that own or at least influence massive financial and physical resources whose husbandry they have been trained to manage.

They are ultimately trained decision makers reacting to proposals that finally cross their desks. To assign them the ability to actually conspire to a common goal is laughable. What is not laughable is the ambition of deal makers to do the next bigger deal until size becomes its own problem. There is no global conspiracy but there is plenty of evidence of short sighted thinking everywhere and a general lack of common cause unless an inspired leader pushes it. The counter example has been China. Much of the difficulty globally is that we lack a foundational economic theory that makes core decisions self-evident. Rebounds Gone Wild « Real Climate Economics.

This post by Real Climate Economics blogger James Barrett originally appeared on the Great Energy Challenge blog, in partnership with National Geographic and Planet Forward. Energy efficiency has become very popular in recent years. So much so that it’s becoming cool for the truly hip to hold it in disdain. Economics for Equity and the Environment. E3 Network Blog. Charting the Economic Life Cycle. Romelecture. Kapicka.slides. 15%20lifecycle. A Brief History of the Post-Autistic Economics Movement.

Be Honest: Maybe You Shouldn't Do Your Own Taxes. A Tax Day Plan for Righting the Republic: Just Doing What’s Popular Would Make Us Healthier, Wealthier, Wiser, and Less Indebted. Why Tax Season is the Best Time For a Financial Spring Cleaning. Internet Value Systems and Monetary Policy. Informal value transfer system. Hawala. Resistance & Support. Chart Reading Made Simple - The Ticker Tape Monthly.

20 Things Broke People Say. 20 Things The Rich Do Every Day. BLOG.RICHHABITS.NET. Opportunities and Choices. Mom and Dad Money - financial advice from one parent to another.