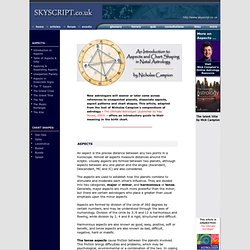 Skywriter’s Impact Test for Stelliums and Multiple Conjunctions–Version 2.0. ©6-11-2011 by Donna Cunningham This is a test to measure the strength of stelliums or multiple conjunctions and therefore to find out their comparative strength. 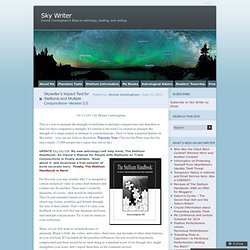 It’s similar to the tests I’ve created to measure the strength of a single planet or element in your horoscope. They’ve been a popular feature on Skywriter—you can see links to them here: Planetary Tests. (The test for Pluto tops the list, since nearly 15,000 people have taken that test so far.) UPDATE 11/11/13: My new astrology/self help book, The Stellium Handbook: An Owner’s Manual for People with Stelliums or Triple Conjunctions is finally available. For this test, you may wonder why I’ve assigned a certain numerical value to some chart features and a lesser one for another.

Capricorn Stellium – An Introduction. (c)August 1, 2012 by Donna Cunningham, MSW I recently made the startling discovery that every single child born on the planet in 1989 had a triple conjunction of Uranus, Neptune, and Saturn in Capricorn. 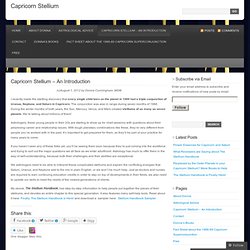 The conjunction was also in range during seven months of 1988. During the winter months of both years, the Sun, Mercury, Venus, and Mars created stelliums of as many as seven planets. We’re talking about millions of them! Learning Astrology - The Planetary Aspects. The Sun The Sun represents the Self, one's way of being in the world. 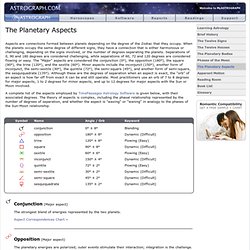 It can represent, on different levels, both the ego and the higher Self or soul purpose. It rules Leo and is exalted in Aries. Astrological Aspects, Their Orb and Meaning. In astrology, an aspect is defined by the angular distance between two planets. 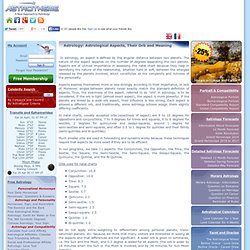 The nature of the aspect depends on the number of degrees separating the two planets. Aspects are of utmost importance in assessing the natal chart because they help in identifying the nature of the relationship, whether hard or soft, between the energies released by the planets involved, which constitutes all the complexity and richness of the personality. Aspects express themselves more or less strongly according to their importance, or lack of. Moreover, angles between planets never exactly match the standard definition of aspects. The Meaning of the Quincunx or Inconjunct Aspects in Astrology. The inconjunct or quincunx (the terms are generally used interchangeably) aspect in astrology is formed between planets that are roughly 150 degrees apart. 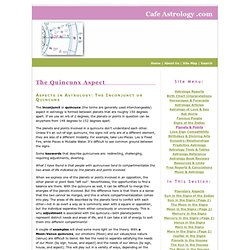 If we use an orb of 2 degrees, the planets or points in question can be anywhere from 148 degrees to 152 degrees apart. The planets and points involved in a quincunx don't understand each other. Unless it's an out-of-sign quincunx, the signs not only are of a different element, they are also of a different modality. For example, take Leo-Pisces.

Leo is Fixed Fire, while Pisces is Mutable Water. Some keywords that describe quincunxes are: redirecting, challenging, requiring adjustments, diverting. What I have found is that people with quincunxes tend to compartmentalize the two areas of life indicated by the planets and points involved. Conjunction Frequencies. This is a complete list of all the pages looking at the movement of outer planets: Jupiter, Saturn, Uranus, Neptune and dwarf planet Pluto as they traverse the ecliptic: future, current and past positions. 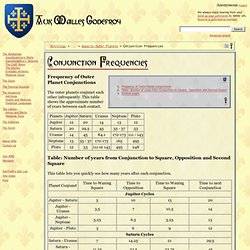 There are many pages here, each taking a unique view. Synodic Astrology: Planetary Synod Tables. Copyright © 2003-2013 Nick Anthony Fiorenza, All Rights Reserved A timeline of Planetary Synodic Cycles: revealing the dates of each synodic cycle and their sidereal locations. 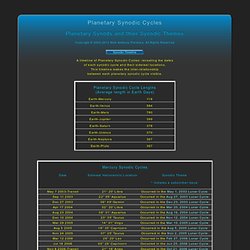 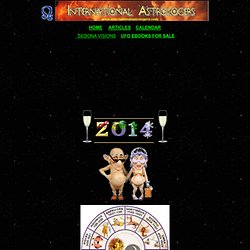 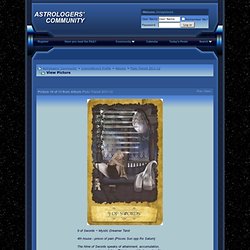 This is a card that speaks of inner feelings of guilt, sorrow and confusion. It asks you to take time for inner reflection in order to overcome debilitating emotions. Lunaria. Lunar Cycles Graph. The current month's Moon cycles are presented here. In astrology, the Sun-Moon cycle is most commonly tracked, and it is depicted in the Lunar Cycles Graph, as well as lunar cycles with Mercury, Venus, Mars, Jupiter, Saturn, Uranus, Neptune, and Pluto.

See below for information about how to use the graph in order to elect the best dates to begin new projects, as well as the meanings of each lunar cycle. Lunar Cycles Graph. Astrology Trading - Planetary Line. Moon Aspects Today. Planets' Price & Timing. Moon's Aspect. Moon Aspect. Intraday. Mercury, Venus, Mar, Jupiter, Saturn. Day Trading. Free Astrology Trading Software. The Mountain Astrologer Editor's Choice The Void of Course Moon. Understanding the Void-of-Course Moon by Jenni Stone The Moon makes a complete circle through the twelve signs every 28.5 days and spends approximately 2.5 days in each sign. Some Moon signs are felt more acutely than others: In the sign of Aries, for instance, the energy is physical and sometimes angry, a dynamic force that can be used to tackle tasks and start projects; the Moon in Taurus is a more laid-back and sensual urge to enjoy fine dining and good music.

As the Moon arrives in the sign of Gemini, the telephone starts ringing and the messages begin to pour in. There are, of course, other influences at work in the solar system, but the Moon is always playing "background music" that keeps us connected to the Earth and the stars. There is a time, however, when this connection is interrupted and we "float" between signs. The Moon goes void of course every two days or so, and this can last anywhere from a few minutes to several hours. However, this is not always so. 1. 2. Astrologer Celeste Teal tells how lunar node transits coincide with life events. Finding themes and patterns suggesting a certain type of event can be relatively easy. But, when it comes to timing an event, we can often use all the help we can get. The nodes of the Moon provide this timing and helps to pinpoint with more detail the particulars of an event. Timing Events with the Moon’s Nodes The North Node of the Moon, both in the natal horoscope and in its transit provides a positive influx of energy and power.

It has been identified with Jupiter and embodies a joining quality. MoonPluto. DEPTH ASTROLOGY: A Handbook by Gargatholil To all good patrons of the Depth Astrology2.com website— Your interest in this website and the many visits that you have made to it are greatly appreciated. It has been very satisfying to see usage of this on-line handbook grow from a few hundred users to more than 15,000 unique visitors a month. I have been pleased to offer this content free of charge while the site was under construction and for a period of time afterwards. Return Charts. Return Charts by Celestial Object I was very interested in discovering that all return charts occur in regular patterns. Although they seem random, the position of each is dictated by the relationship of the orbital movement of each planet and the earth's movement.

April 21-27 2014 Astrology Forecast: Grand Cross Peaks! Malvin Artley - Astrology Bridging East and West. What follows are excerpts from several full moon letters that I wrote in the period of 2004/5 regarding the Grand Quintile configurations that took place in that time [Oct ‘04] and about quintiles in general. Quintiles offer a fascinating insight into unrealized capacities and gifts in people, especially where geometric patterns of said aspect series are found. John Townley's AstroCocktail. Esoterica. Tyme. Esoteric Endeavors. Oracula. 99 Bottles. Live Long and Prosper.