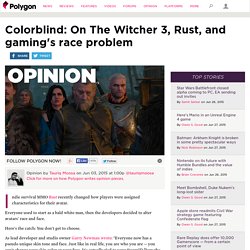 Everyone used to start as a bald white man, then the developers decided to alter avatars' race and face. Here's the catch: You don't get to choose. As lead developer and studio owner Garry Newman wrote: "Everyone now has a pseudo unique skin tone and face. Just like in real life, you are who you are — you can't change your skin color or your face. It's actually tied to your SteamID [how the game recognises you]. " Many white gamers expressed concern Thus player choice of skin color was removed. "There's a lot of skin colors in the world, and it's really easy to appear racially insensitive when doing this. Many white gamers expressed concern, as Megan Condis documents, disliking being forced to think about race and having to play someone who didn't match their own race. Writing on Steam, another user said: "I was going to buy RUST today! You see the problem. Color me invisible Why this matters. 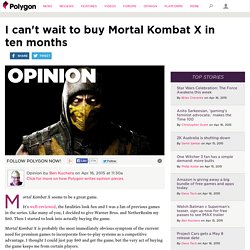 It's well-reviewed, the fatalities look fun and I was a fan of previous games in the series. Like many of you, I decided to give Warner Bros. and NetherRealm my $60. Then I started to look into actually buying the game. Mortal Kombat X is probably the most immediately obvious symptom of the current need for premium games to incorporate free-to-play systems as a competitive advantage. I thought I could just pay $60 and get the game, but the very act of buying the game keeps me from certain players.

Hell, I already missed out on Goro because I was a chump and decided to "wait and make sure the game works. " But wait, there's more! This in and of itself isn't that big of a deal. Ubisoft shipped a broken game you can't return, free DLC doesn't make it right. The idea that Ubisoft somehow didn't know the condition of Assassin's Creed Unity doesn't just strain credulity, it snaps it in two and then sets the pieces on fire. 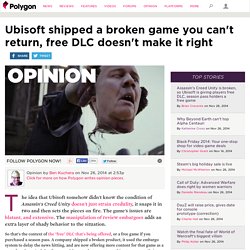 The game's issues are blatant, and extensive. The manipulation of review embargoes adds an extra layer of shady behavior to the situation. So that's the context of the "free" DLC that's being offered, or a free game if you purchased a season pass. A company shipped a broken product, it used the embargo system to delay the news hitting, and are now offering more content for that game as a sort of apology. Monument Valley made $5.8 million in revenue from a $1.4 million development cost. Monument Valley is an amazing mobile game that seemed to enjoy great sales, but what does that mean in the modern market? 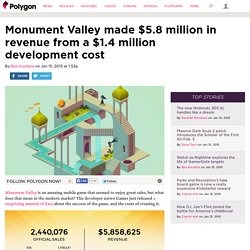 The developer ustwo Games just released a surprising amount of data about the success of the game, and the costs of creating it. In terms of sheer monetary success it cost $1.4 million for the eight-person team to create the game, and to date it has brought in over $5.8 million in revenue. That's not a bad return on investment!

From a creative standpoint the percentage of people who bought the game, along with the 25 percent conversion into the paid expansion, are incredible numbers. This isn't just a game that people bought in large numbers, it's a game that people played, enjoyed, finished, and then were willing to pay more for more content. There are other interesting tidbits to be found in the infographic, and it's rare for a developer to open the books in this way. 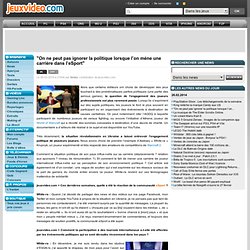