8 Things to Stop Passive-Aggressive Behavior in Workplace. One of the most irritating things you’ll ever have to deal with in your workplace is a passive-aggressive coworker. 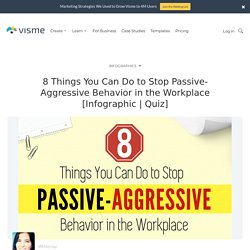 We’ve all seen this behavior before--and perhaps been guilty of it at some point: Think of the coworker who doesn’t say hello when he sees you in the hallway. When you write him an email to ask for important deliverables, he doesn’t respond. He even actively undermines you but acts like nothing’s wrong when you confront him. Sound familiar? Sadly, this type of behavior is more common than you think. As a below-the-radar technique for expressing discontent, it’s one of the preferred methods for venting anger in the workplace--just short of crossing a red line and risk getting fired.

Imagine confronting this infuriating behavior by calling your coworker a “passive-aggressive” or, worse still, a “jerk”? How lack of clarity leads to workplace drama. Where there is backstabbing, gossip, insubordination or any other type of drama, there is always a lack of clarity in some area. 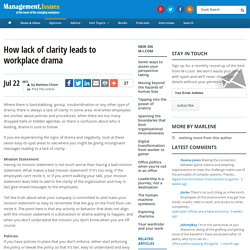 And when employees are unclear about policies and procedures, when there are too many dropped balls or hidden agendas, or there is confusion about who is leading, drama is sure to follow. If you are experiencing the signs of drama and negativity, look at these seven easy-to-spot areas to see where you might be giving incongruent messages leading to a lack of clarity. Mission Statement Having no mission statement is not much worse than having a bad mission statement. What makes a bad mission statement? If it's too long, if the employees can't recite it, or if you aren't walking your talk, your mission statement does little to add to the clarity of the organization and may in fact give mixed messages to the employees. Promises Be careful what you promise.

The same applies for any new management practice, project or initiative that you want to implement. Bad Behavior Is Preventable. Momastery's Glennon Doyle shares anti-bullying strategy. Get the latest from TODAY Sign up for our newsletter This post was first published on Glennon Doyle's blog, Momastery, in 2014. 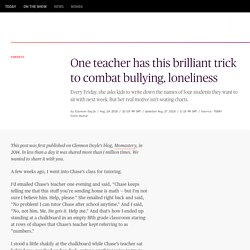 In less than a day it was shared more than 1 million times. We wanted to share it with you. A few weeks ago, I went into Chase’s class for tutoring. I’d emailed Chase’s teacher one evening and said, “Chase keeps telling me that this stuff you’re sending home is math — but I’m not sure I believe him. I stood a little shakily at the chalkboard while Chase’s teacher sat behind me, perched on her desk, using a soothing voice to try to help me understand the “new way we teach long division.” Follow TODAY Parents on Facebook for more inspiring stories.

How Taking the Perspective of 100% Responsibility Resolves Conflict and Builds Teams. This Agency Created a Deck of Cards That Helps Solve Workplace Conflicts and Spark Conversations. Strategy and design agency Sub Rosa thinks it has a solution for any internal conflicts your company may be facing with clients—and the key is a special deck of cards. 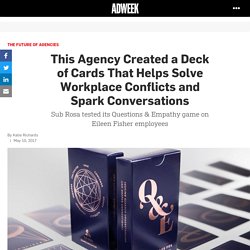 Beginning this week, Sub Rosa will sell sets of the cards called Questions & Empathy online and in its New York store (where it is also headquartered). The agency came up with concept and designed the cards. So what makes this deck of cards so special? The full deck, which is somewhat reminiscent of a deck of tarot cards, includes 49 question cards and seven “empathic archetypes,” with seven questions for each archetype. The seven different archetypes are somewhat abstract, with names like inquirer and alchemist. Fair warning from the Sub Rosa team: Things can get deep pretty quickly.

Sub Rosa “After evaluating the work, it became clear that one theme was consistent across all of our work: empathy,” Ventura said. The deck ties in with a speaker podcast series Applied Empathy that the agency launched in March 2016. Don't let these 5 toxic workplace dramas hurt patient safety. You may not think so, but slackers, difficult colleagues, timid supervisors, arrogant doctors and managers who play favorites can reduce patient safety and quality of care. 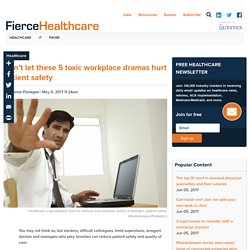 A survey of more than 1,200 physicians, nurses and staff, led by Joseph Grenny and David Maxfield of the training company VitalSmarts, identified five common behavioral problems that more often than not go unaddressed in hospitals and other healthcare settings. “Healthcare is not immune to workplace drama,” says Grenny in a study announcement. “If anything, the stress and complexities introduced by long and difficult hours, power differentials among colleagues and mounting regulation ensures healthcare professionals will face interpersonal strain and frustration at every turn. What this research confirms is that if you can’t talk about high stakes staff issues, you can’t deliver great healthcare.” People with poor initiative. Difficult peers. Failure of managers to hold others accountable. Unresponsive physicians.