Reddit: the front page of the internet. This Novel is Made Entirely of Terrifying GIFs. This article originally appeared on VICE. 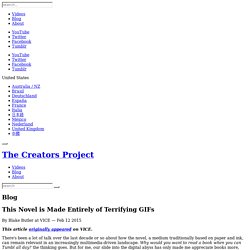 There's been a lot of talk over the last decade or so about how the novel, a medium traditionally based on paper and ink, can remain relevant in an increasingly multimedia-driven landscape. Why would you want to read a book when you can Tumbl all day? The thinking goes. But for me, our slide into the digital abyss has only made me appreciate books more, made it more refreshing to disappear from the machines and enter a world of pure illusion and imagination. In any case, literature's relationship to the internet is growing rapidly, and Dennis Cooper is on the forefront of those web-savvy authors defining the new landscape. That innovation is particularly evident in his latest release, Zac's Haunted House, a free digital novel composed entirely of animated GIFs. Cooper and I discussed via email his novel, the internet, and what the hell else might be next.

VICE: What gave you the idea of writing a novel using only animated GIFs? Related: Hooters Girl Posts F*cking Insane, Messed Up Story On Twitter. By : Sam Ridgway | 29/10/15 | 8.6kShares Last night, Twitter came to life when a user called Zola decided to bless the socialsphere with one of the most f*cked up stories ever. 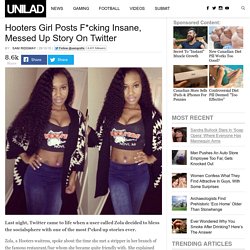 Facebook. Sonya Golden Hand: Russia's Princess of Crime. It’s telling that even after police captured the infamous Russian thief Sofia Blyuvshtein (better known as Sonya Golden Hand), nobody was 100% sure it was actually her. 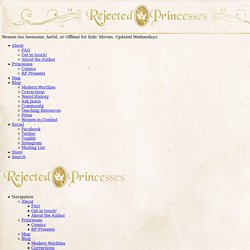 Weird Horror Master Thomas Ligotti's Review of the Hotdog Pizza from Pizza Hut. This article is part of the The Great Authors Series series. 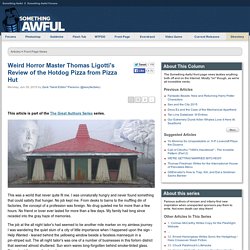 This was a world that never quite fit me. I was unnaturally hungry and never found something that could satisfy that hunger. No job kept me. The Mysterious Shadows Of Skullshadow Island. “You navigated my island. 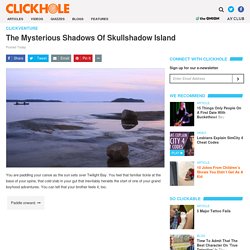 You eventually figured out that these were drug traffickers and not ghosts. The New York Stock Exchange goes down: inside the dystopian aftermath. I wake up from my whiskey stupor to the scent of burning motherboards, and I know that something is wrong. 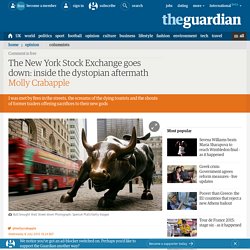 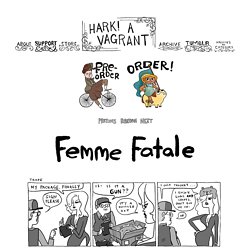 I Don't Think David Brooks Is Okay, You Guys. The Real Origins of the Religious Right - Randall Balmer. The IRS was not placated. 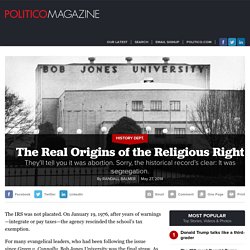 On January 19, 1976, after years of warnings—integrate or pay taxes—the agency rescinded the school’s tax exemption. For many evangelical leaders, who had been following the issue since Green v. Connally, Bob Jones University was the final straw. As Elmer L. Rumminger, longtime administrator at Bob Jones University, told me in an interview, the IRS actions against his school “alerted the Christian school community about what could happen with government interference” in the affairs of evangelical institutions. Have You Encountered the Softboy? Have You Encountered the Softboy? 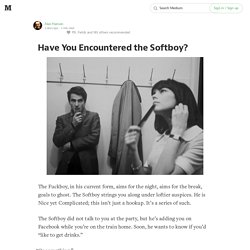 The Fuckboy, in his current form, aims for the night, aims for the break, goals to ghost. The Softboy strings you along under loftier auspices. He is Nice yet Complicated; this isn’t just a hookup. The Day My Therapist Dared Me to Have Sex With Her. It’s the waning moments of my fourth session with a new therapist. 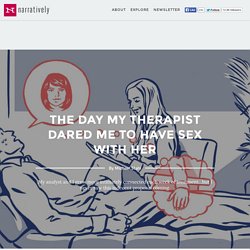 I’m holding back — and she knows it. My entire body feels tense, not ideal for the setting. I try to relax, but the plush leather couch crumples under me when I shift, making the movements extraordinary. I’ve barely looked into my therapist’s blue eyes at all, and yet I think the hour has gone very well. I hid Illuminati symbols in broadcast news graphics because I was bored — Hopes&Fears — flow "Media" They liked my demo reel of killer teddy bears After graduation I wasn’t looking at many prospects, but a friend of mine at college was working at a company who sold computers and IT services to a large broadcasting company on the East Coast and heard that they were looking for a new 3D animator so he put my name in the hat. There really wasn’t an interview. It was more of just an overview of my demo reel, which mostly consisted of stuff I had done in college.

It destroyed a small yogurt company called Three Happy Cows. Two months later, Edgar Diaz, the founder of Three Happy Cows, confessed that he'd set the fire. Yet people who knew Diaz, and had worked with him, could not believe it.