Monasterboice. Monasterboice (Irish: Mainistir Bhuithe) are the remains of an early Christian monastic settlement in County Louth in Ireland, north of Drogheda. 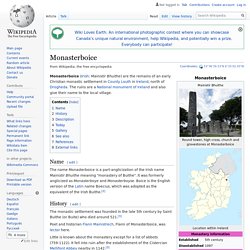 The ruins are a National monument of Ireland and also give their name to the local village. Name[edit] The name Monasterboice is a part-anglicization of the Irish name Mainistir Bhuithe meaning "monastery of Buithe". It was formerly anglicized as Monasterboye and Monasterboyse. Boice is the English version of the Latin name Boecius, which was adopted as the equivalent of the Irish Buithe.[2] History[edit] The monastic settlement was founded in the late 5th century by Saint Buithe (or Buite) who died around 521.[3] Poet and historian Flann Mainistrech, Flann of Monasterboice, was lector here. Little is known about the monastery except for a list of abbots (759-1122). A parochial church was in use at the location by the 13th century.[3] Description[edit] The round tower is about 28 metres tall, and is in very good condition. Today[edit] This Is Without Question The Best Pub In Ireland - Lovin.ie. Worth a day trip, no doubt about it Picking one pub to sit at the top of the pile in a country that is famous for its pubs is a pretty daunting task. 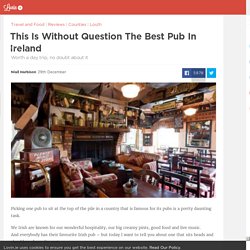 We Irish are known for our wonderful hospitality, our big creamy pints, good food and live music. And everybody has their favourite Irish pub – but today I want to tell you about one that sits heads and shoulders above the rest. This isn't just the best pub in Ireland, but the best Irish pub in the world – and if you haven't been lucky enough to visit you'd better start making plans to visit the Cooley Peninsula. Bus 161 Eireann Dundalk Ireland 2016100001. Fitzpatrick's Restaurant *** 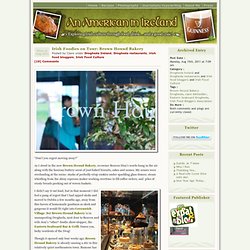 As I stood in the new Brown Hound Bakery, co-owner Reuven Diaz’s words hung in the air along with the luscious buttery scent of just-baked biscuits, cakes and scones. My senses were overloading at the scene: stacks of perfectly-crisp cookies under sparkling glass domes; steam whistling from the shiny espresso maker working overtime to fill coffee orders; and piles of crusty breads peeking out of woven baskets. I didn’t say it out loud, but in that moment I did feel a pang of regret that I had upped sticks and moved to Dublin a few months ago, away from this haven of homemade goodness so sleek and gorgeous it would fit right into Greenwich Village. But Brown Hound Bakery is in unsuspecting Drogheda, next door to Reuven and wife Jeni’s *other* foodie show-stopper, the Eastern Seaboard Bar & Grill.

Damn you, lucky residents of the Drog! Brown Hound is decorated with a variety of old and new items, some of which are for sale. Ghan House, award winning restaurant and accommodation in Medieval Carlingford. Eno' bar & grill. Drogheda restaurants « An American in Ireland. Before Mountaineering Man, before The Coombe and before Raheny, there was Drogheda. 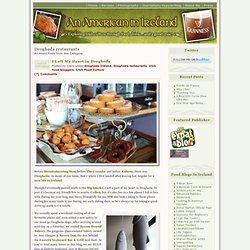 As many of you know, that’s where I first landed after leaving Los Angeles for a new life in Ireland. Though I eventually moved south to the Big Smoke, I left a part of my heart in Drogheda. In part it’s because my friends live in nearby Collon, but it’s also due to a few places I fell in love with during my year-long stay there. Thankfully for me MM also took a liking to these places during his many visits to me during our early dating days, so he’s always up for taking a quick drive up north to Co. Louth. We recently spent a weekend visiting all of our favourite places and even added a new eatery to our must-go Drogheda stops. After picking up some chocolate banana bread at the bakery, we ventured next door to the latest Glasgow/Diaz venture, Mo’s takeaway. (more…) The easternseaboard bar and grill. John and Sally McKennas' Guides. Hear that? 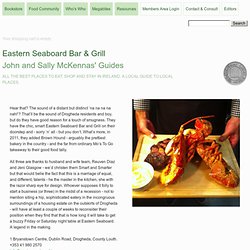 The sound of a distant but distinct ‘na na na na nah!’? That’ll be the sound of Drogheda residents and boy, but do they have good reason for a touch of smugness. They have the chic, smart Eastern Seaboard Bar and Grill on their doorstep and - sorry ‘n’ all - but you don’t. What’s more, in 2011, they added Brown Hound - arguably the prettiest bakery in the country - and the far from ordinary Mo’s To Go takeaway to their good food tally. All three are thanks to husband and wife team, Reuven Diaz and Jeni Glasgow - we’d christen them Smart and Smarter but that would belie the fact that this is a marriage of equal, and different, talents - he the master in the kitchen, she with the razor sharp eye for design. 1 Bryanstown Centre, Dublin Road, Drogheda, County Louth. Eastern Seaboard Bar & Grill. County Louth Golf Club, Baltray. Louth County Enterprise Board - Hamilton Interiors Video.