Pinball Lamp or Switch Matrix Troubleshooting - All solid state pinball’s use a switch matrix and although the actual implementation may vary slightly, the theory and troubleshooting are the same. 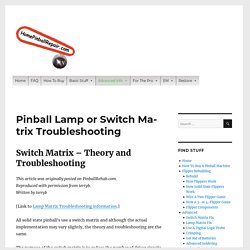 The purpose of the switch matrix is to reduce the number of driver circuits form 64 to 16 and minimize playfield wiring. This is achieved by pulsing each column sequentially while monitoring all of the rows. This is why the column is called the strobe, or send side, and the row is called the return side. For a list of common problems and troubleshooting, you can jump to this section of the document. Switch Matrix Theory Image 1 is the switch matrix from an Addams Family. Most of this information is also available in the system diagnostics. Note: Switch columns and rows are not wired in the same order as they are shown on the switch matrix. Each column of switches is connected by a green wire with a colored stripe (for example, green-red for column 2) running from one switch to the next. In Image 3, switch 43 is closed (column 4, row 3). Caution. Found A Replacement Bone Busters Skull. Gottlieb Bone Busters Inc. Switch Matrix Chart - Pinitech.com. Pinball Machine Repair - 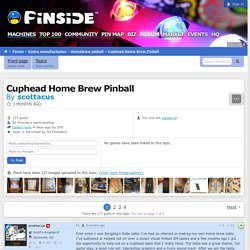 There are a lot of ways of powering a cab and when I first looked at this aspect of the project I really didn't know which way to go. I started off by measuring the amperage draw of the various coils in the cab while TB was still functional. The results that I got were jaw dropping. Facebook. How To Build A Pinball Machine - Accueil. 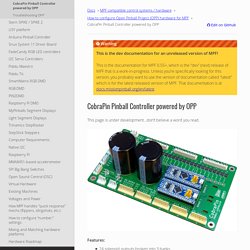 Features: 24 solenoid outputs broken into 3 banks38 direct inputs <OR> 22 direct inputs + 8x8 switch matrixNeopixel support for 512 RGB pixels (RGBW also possible but may be limited to ~460 pixels)24-50V power filter. Board also provides the common ground for the supplies.Fuses for solenoid banks and Neopixels Power Input and Filter¶ Pinball Machine Spare Parts — Coin-Op King. Welcome. The Lego Movie Pinball – Et si je fabriquais un flipper sur le thème du film Lego ? Ranger in the Ruins Deep Dive! In Depth Overview of the Machine, Features, Rules and Code - This Week in Pinball. Overview | Price and Availability | Who's Who | Features | Rules and Code Ranger in the Ruins is the most recent creation for the P3 Platform! 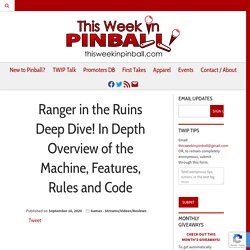 Below is an in-depth overview of the machine, and a dive into the features and rules – check it out! Technology! Adventures in Pinball. Visual Pinball Engine. Freezy/VisualPinball.Engine: Visual Pinball Engine for Unity. IOT Pinball Puts Oktoberfest Fun On Tap. We don’t really miss going out to bars all that much, unless you’re talking about the one downtown with all the pinball machines. 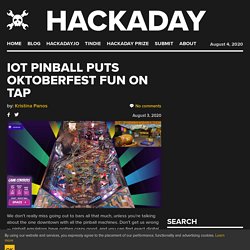 Don’t get us wrong — pinball emulators have gotten crazy good, and you can find exact digital replicas of most machines to play on your phone or whatever. But it just doesn’t compare to the thrill of playing a real cabinet. Don’t despair, because for the next couple of weeks, you can queue up to play on a real Oktoberfest pinball machine that’s sitting in Espoo, Finland. The controls are hooked up to a Raspberry Pi 4 through a custom HAT, along with a camera pointed at the playfield and another focused on the backglass screen. The game development/video streaming company Surrogate is hosting a tournament over the internet, and will be giving prizes to the top ten high rollers.

We usually have to wait until the holiday season to come across these remote-reality gaming opportunities. This Week in Pinball - Weekly Pinball News Every Monday. 's PinBall Page Frameset. Seanirby/G1Pinball. 86Pixels – Creating wonders for the amusement gaming industry. Arcade Blog: A Place To Bury Strangers Pinball — Death By Audio Arcade. My friend Eric Barry Drasin had acquired an old 1959 Gottlieb Mademoiselle machine and was hacking it so it worked with Max/MSP. 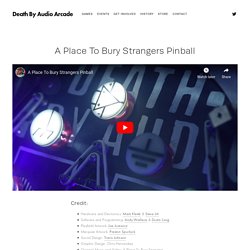 I had been interested in hearing about the process, but never got a chance to meet up to see the actual machine. In 2016, he was moving out of his studio and couldn't bring the machine with him, so I offered to buy it from him. It wasn't in great shape - two of the legs were falling off and the headboard glass was cracked. The playfield was chipped and peeling in some parts and the wires had all been cut. For all intents and purposes, it was trash- but it was perfect for what we wanted. I reached out to my friend Steve Litt, a fellow electrical engineer, NYU professor, and head of Crudlabs, to help inspect the cabinet. About 90% of the interior of the machine was made up of these relays. Pinscape Resources. Pinscape_Controller_V2 - An I/O controller for virtual pinball machines:... An I/O controller for virtual pinball machines: accelerometer nudge sensing, analog plunger input, button input encoding, LedWiz compatible output controls, and more. 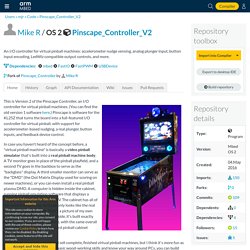 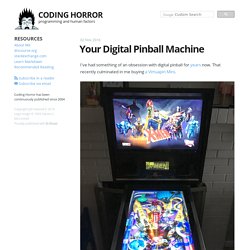 That recently culminated in me buying a Virtuapin Mini. OK, yes, it's an extravagance. There's no question. Build-A-Ball Workshop Pt. 1 (MAKING A PINBALL MACHINE) Pinball Coffee Table. I was putzing around on the Internet a year or so ago, and I happened upon a picture that instantly caught my eye. 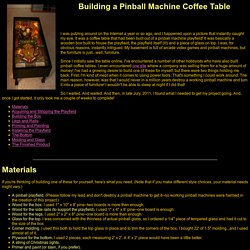 It was a coffee table that had been built out of a pinball machine playfield! It was basically a wooden box built to house the playfield, the playfield itself (lit) and a piece of glass on top. I was, for obvious reasons, instantly intrigued. My basement is full of arcade video games and pinball machines, but the furniture is just...well, furniture. Download micro:bit pinball Da by ctrl design. Arduino 3D Wire Bending Machine - HowToMechatronics. In this tutorial I will show you how I built an Arduino based 3D wire bending machine. This is actually a typical mechatronic system because it involves mechanical, electrical and computer engineering. So therefore I believe many engineering students or anyone who is new into mechatronics found this project interesting. Overview Here’s the working principle of this 3D wire bending machine. So first, the wire goes through a series rollers, or straighteners. There’s also another stepper motor, called the Z-axis, which actually enables the machine to create three dimensional forms. 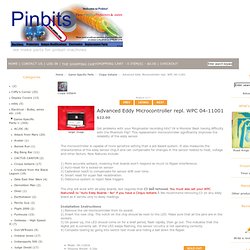 Or is Monster Bash having difficulty with the Phantom Flip? This replacement microcontroller significantly improves the reliability of the eddy sensor. The microcontroller is capable of more sensitive setting than a pot-based system. It also measures the characteristics of the eddy sensor chip,Â and can compensate for changes in the sensor related to heat, voltage and other factors. MAKERBALL – THE diy pinball machine kit - makerballs Webseite! Tiny Pinball Emulator is Hugely Impressive. We were wondering what [Circuitbeard] has been up to lately. Turns out he’s been building a mini pinball cabinet to add to his arcade of self-built games. [Circuitbeard] was forced to break out of his Raspi comfort zone this time. We’re glad he did because this is one impressive build. BUILD an ARCADE XY VECTOR MONITOR. I have split up this build into 3 major sections for my Vector monitor. The deflection, the high voltage and the CRT. The deflection runs the CRT tubes yoke and controls the beam on the screen.

It is comprised of 2 amplifiers and a spot kill circuit. The high voltage takes care of the anode, focus and misc voltages used to drive the crt. The crt is the gun driver circuit and the crt itself. Here are some links that inspired me. DIY Pinball Drop targets COMPLETE. Pi Supply. Home - Path of Play. MAKERBALL – The DIY Pinball Machine Kit by MAKE & PLAY. Makerball is sturdy and solid with. The design is pure and simple.

It consists mainly of wood and works with simple, reliable mechanics that are easy to understand. You also have the option of upgrading Makerball digitally: with a microcontroller and the free MAKE & PLAY score app on your smartphone, you can start playing for points! Total Annihilation Pinball. Total Annihilation Pinball Total Annihilation Pinball is a project I started in November of 2015. The goal was to create a semi-simple, early 80’s Bally influenced custom machine. This pinball machine would have upgraded electronics, displays, lights, and software with an 80’s retro-futuristic feel. Physical Specifications: Cabinet: Bally Dolly Parton donor cabinet.Playfield: Single level custom design/cut.

Download the attached zip file, which includes both the .stl files for use with a 3D printer, as well as the Inventor source files in case you want to modify the parts to fit your own design. Construction - Pinball Makers. Tools. 3D Wingmaster. DIY Geoboard with Fabric Loops – Crayon Box Chronicles. Trapezoids, squares, and right triangles, oh my! We love finding interesting ways to learn shapes and colors. Our DIY geoboard is durable, educational, and sets-up in a snap. Pinball Energy Challenge on the App Store. Pinball in England (Locations/Events/People) - General - Tilt Forums. Bede's Hobbit Pinball Mod.