Geology Page. Friday's #Geology 101 - Book vs Reality: Descending Slab. We can "see" them in seismic profile, outlined by earthquake foci. #tectonics. Pennsylvania Oil Rush of 1859. How do Geologists identify minerals? Even geologists can have a difficult time identifying minerals. 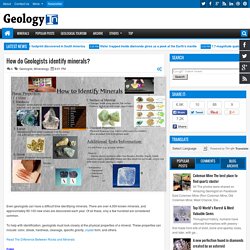 There are over 4,000 known minerals, and approximately 80-100 new ones are discovered each year. Of all these, only a few hundred are considered common. To help with identification, geologists must look closely at the physical properties of a mineral. These properties can include: color, streak, hardness, cleavage, specific gravity, crystal form, and others. Read The Difference Between Rocks and Minerals Color Some minerals can be recognized by their color: azurite is always a deep blue and malachite is green. Luster Luster refers to the brightness of light reflected from the mineral's surface.

Streak A streak test is accomplished by rubbing the mineral on a porcelain plate, also known as a streak plate. Hardness.

Using QAPF diagram to classify Igneous rocks. Igneous rocks are classified on the basis of mineralogy, chemistry, and texture. 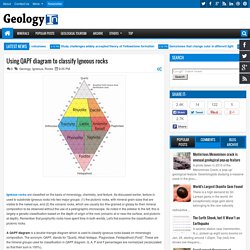 As discussed earlier, texture is used to subdivide igneous rocks into two major groups: (1) the plutonic rocks, with mineral grain sizes that are visible to the naked eye, and (2) the volcanic rocks, which are usually too fine-grained or glassy for their mineral composition to be observed without the use of a petrographic microscope. As noted in the sidebar to the left, this is largely a genetic classification based on the depth of origin of the rock (volcanic at or near the surface, and plutonic at depth). Remember that porphyritic rocks have spent time in both worlds. Let's first examine the classification of plutonic rocks. A QAPF diagram is a double triangle diagram which is used to classify igneous rocks based on mineralogic composition. An exact name can be given only if the mineralogical composition is known, which cannot be determined in the field. 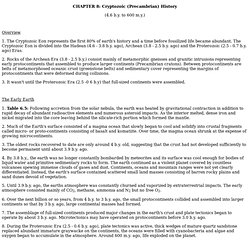 Overview 1. Scientists gauge power of mighty asteroid that shaped Earth. A monster asteroid, far more massive than the one that drove the dinosaurs to extinction, punched a huge hole in the Earth's crust billions of years ago and triggered global earthquakes that sent waves of towering tsunamis across all the world's oceans. 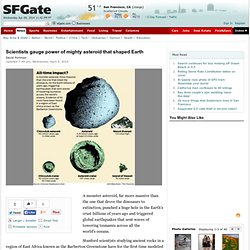 Stanford scientists studying ancient rocks in a region of East Africa known as the Barberton Greenstone have for the first time modeled the asteroid's impact and concluded that it must have been one of the most powerful events to ever shape the face of Earth. The jumbled rocks there hold clear evidence of the stuff thrown up by the asteroid's impact roughly 3.26 billion years ago, but no one has found just where the crater-forming asteroid actually hit, said Stanford geologist Donald Lowe, who has explored the jumbled rocks of the Barberton area for more than a decade. Structure du globe terrestre - Google Search. Geophysics. Age of the sea floor. 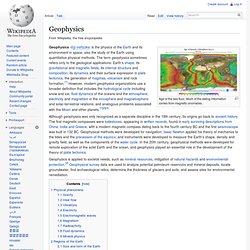 Much of the dating information comes from magnetic anomalies. Geophysics /dʒiːoʊfɪzɪks/ is the physics of the Earth and its environment in space; also the study of the Earth using quantitative physical methods. The term geophysics sometimes refers only to the geological applications: Earth's shape; its gravitational and magnetic fields; its internal structure and composition; its dynamics and their surface expression in plate tectonics, the generation of magmas, volcanism and rock formation.[1] However, modern geophysics organizations use a broader definition that includes the hydrological cycle including snow and ice; fluid dynamics of the oceans and the atmosphere; electricity and magnetism in the ionosphere and magnetosphere and solar-terrestrial relations; and analogous problems associated with the Moon and other planets.[1][2][3] Although geophysics was only recognized as a separate discipline in the 19th century, its origins go back to ancient history.

The Berkeley Course in Applied Geophysics. Hearst Memorial Mining Building. The Hearst Memorial Mining Building at the University of California, Berkeley, is home to the university's Materials Science and Engineering Department, with research and teaching spaces for the subdisciplines of biomaterials; chemical and electrochemical materials; computational materials; electronic, magnetic, and optical materials; and structural materials.[3] The Beaux-Arts-style Classical Revival building is listed in the National Register of Historic Places and is designated as part of California Historical Landmark #946.[4] It was designed by John Galen Howard, with the assistance of the UC Berkeley-educated architect Julia Morgan and the Dean of the College of Mines at that time, Samuel B. 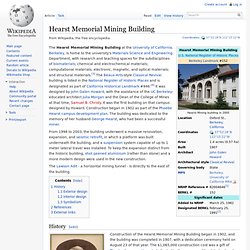 Christy. It was the first building on that campus designed by Howard. Construction began in 1902 as part of the Phoebe Hearst campus development plan. The building was dedicated to the memory of her husband George Hearst, who had been a successful miner. History[edit] Exterior design[edit] EPS Homepage. Welcome to the USGS - U.S. Geological Survey. USGS Mineral Resources Program. Zhangye Danxia.