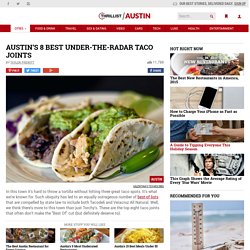 Austin's 14 Most Important Restaurants. Austin's food game has always been pretty strong, but we’ve only recently been widely acknowledged as a full-blown culinary tour de force -- and it's mainly in part to trailblazers like the ones on his list. 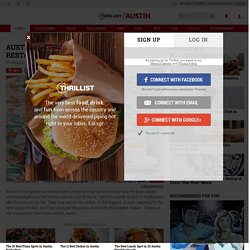 They may not be the oldest, or the biggest, or even necessarily the best spots in town, but they changed the game, and made the biggest impact. These are the restaurants that make Austin, Austin. Flickr/Kevin Trotman One-Line Save Venue Downtown Scholz Garten is not only a kitschy pregame location for BBQ and beer -- it’s the oldest operating business in Texas. Continue Reading Flickr/Kent Wang Rosewood Dining at Nubian Queen Lola’s is not different from dining at the home of a family member -- if your family offers all-you-can-eat Gumbo Fridays. Tacodeli Tacodeli Multiple locations Unless you've been living under a rock, you know that Tacodeli is one of Austin's favorite locally owned fast-casual taco joints -- and a favorite of Austin musicians. The Frisco Shop Fonda San Miguel Chez Nous. Cheesy Vegetable Quiche with Cauliflower Crust.

I have been D.Y.I.N.G. to try out this cauliflower pizza crust I’ve seen all over the place. 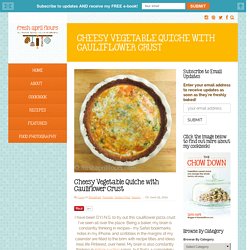 Being a baker, my brain is constantly thinking in recipes– my Safari bookmarks, notes in my iPhone, and scribbles in the margins of my calendar are filled to the brim with recipe titles and ideas (real life Pinterest, over here). My brain is also constantly thinking in indoor cycling songs, but that’s a completely different problem I have. I subscribe to about 10 different food blogs, and I get an email whenever one of them updates (which you can do with mine in the top right of the sidebar!) , so I always have new ideas waiting for me when I wake up and throughout the day. Although cauliflower pizza crust wasn’t one that came in through that particular platform, it’s still been on my mind for probably about a month. All you need for the crust is a large head of cauliflower, some grated Parmesan, an egg, and some spices. (And yes, that is a duck pot holder, welcome to my kitchen!) Total time. Top Ten Quick and Easy Quiche Recipes. 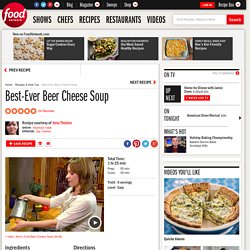 In a large stockpot, melt the butter over medium heat. Add the carrots, peppers and 1/2 teaspoon salt and cook, stirring, until the vegetables are soft, about 5 minutes. Add the flour and cook, stirring, until well incorporated, about 5 minutes more. Add the chicken stock, beer and half-and-half and cook, whisking often, at a very slow simmer over medium-low heat for 15 minutes. Add the cheddar to the soup by the handful, whisking each batch until smooth. Puree the soup in batches in a blender (holding a thick towel over the lid to prevent overflow) until very smooth. Just before serving, reheat the soup until steaming and taste for seasoning, adding salt as necessary. Blending Hot Liquids: When blending hot liquids, remove liquid from the heat and allow to cool for at least 5 minutes. Adapted from "The New Midwestern Table" by Amy Thielen (c) Clarkson Potter, 2013. 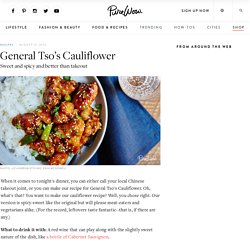 In a medium bowl, whisk the flour, cornstarch, baking powder and salt to combine. In a liquid measuring cup, whisk the eggs, soy sauce and vinegar to combine. Slowly pour the egg mixture into the flour, whisking constantly. You should end up with a thick but still dip-able batter (thin with a little water if needed). 2. 3. 4. 5.