Carbonate Tectonics. High resolution stratigraphy of initial stages of rifting, Sergipe-Alagoas Basin, Brazil. How to Draw a Graphic Log? The standard method for collecting field data of sediments/sedimentary rocks is to construct a graphic log of the succession. 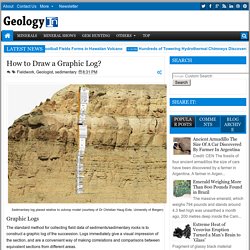 Logs immediately give a visual impression of the section, and are a convenient way of making correlations and comparisons between equivalent sections from different areas. Repetitions of facies, sedimentary cycles and general trends may become apparent, such as a systematic upward change in bed or cycle thickness or in grain-size, increasing or decreasing upward. In addition, the visual display of a graphic log helps with the interpretation of the succession. Where the exposure is continuous or nearly so, there is no problem concerning the line of the log; simply take the easiest path. If the outcrop is good but not everywhere continuous it may be necessary to move laterally along the section to find outcrops of the succeeding beds. It is best to log from the base of the succession upwards. Lithology Texture (grain-size) Stratigraphic concepts and lithostratigraphy. 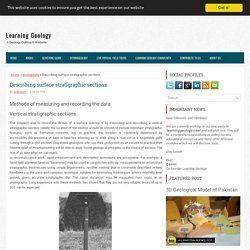 Ideally, the location of the section should be chosen to include important stratigraphic features, such as formation contacts, but, in practice, the location is commonly determined by accessibility-the presence of bars or beaches allowing us to walk along a river cut or a negotiable gully cutting through a cliff section. Chap5. Campbell 1967. Sand and sandstone. Geologic TimeScale Foundation - Stratigraphic Information. A. 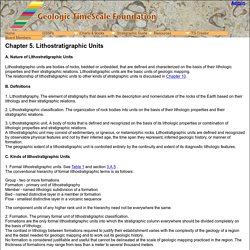 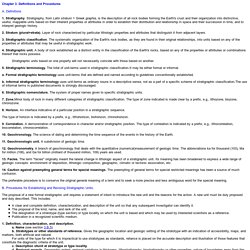 Recommended Editorial Procedures. The editorial rules and procedures enumerated below apply to the English language. Rules of orthography of other languages may make these recommendations inapplicable. i. Capitalization. Understanding the sedimentary rocks - Geotalk 2 (MGSS) Image Result for x-raw- Ngeo2209 s1. 0c6dd189d604daddaa73beb8745c9bc785d2. Rock Key. The Rock Identification Key - by Don PeckRock Key Table of Contents What Are Rocks? 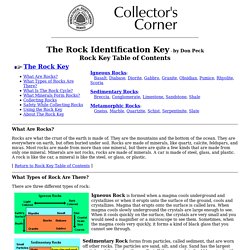 Rocks are what the crust of the earth is made of. They are the mountains and the bottom of the ocean. They are everywhere on earth, but often buried under soil. Rocks are made of minerals, like quartz, calcite, feldspars, and micas. Most rocks are made from more than one mineral, but there are quite a few kinds that are made from only one mineral. Classification of Sedimentary Rocks. Classification of Sedimentary Rocks by Russell B. 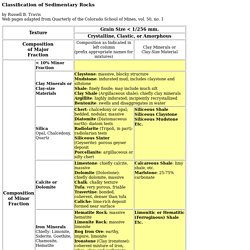 Travis Web pages adapted from Quarterly of the Colorado School of Mines, vol. 50, no. 1 The names in the above chart are root names and should be preceded by appropriate terms for any significant feature of the rock. The proper order is color, structure, grain size (sandstones only), minor constituents, cement, and root name. Structure includes, for example, "thin-bedded," "massive," "crossbedded," "thinly laminated," etc. Mudstones and Shales. Pardon Our Interruption. Underwater sediments release. Why Do Rivers Have Deltas? GSL Sand Grains Questionsv2. Introduction to Sedimentary Rocks. Classifications of carbonate rocks. Untitled Document. 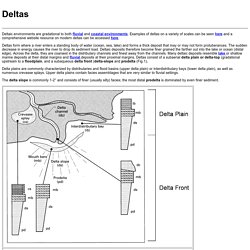 Examples of deltas on a variety of scales can be seen here and a comprehensive website resource on modern deltas can be accessed here. Deltas form where a river enters a standing body of water (ocean, sea, lake) and forms a thick deposit that may or may not form protuberances. The sudden decrease in energy causes the river to drop its sediment load. Deltaic deposits therefore become finer grained the farther out into the lake or ocean (distal edge). Delta plains are commonly characterized by distributaries and flood basins (upper delta plain) or interdistributary bays (lower delta plain), as well as numerous crevasse splays.

Conceptual Diagrams - OzCoasts. Conceptual diagrams are concise and visually-stimulating illustrations that use symbols or drawings to depict the important features, processes and management challenges in a particular environment, such as coastal waterways. 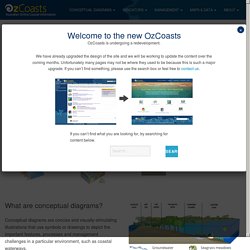 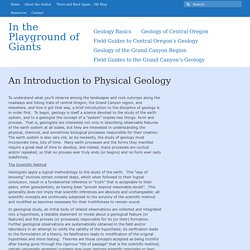 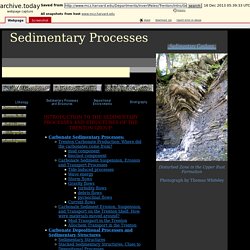 >>Back to Top Mud Transport in the Trenton: According to studies by Titus (1974) and Mehrtens (1988, 1992), aside from purely micritic beds with nearly 100% micritic mud, nearly all coarser-grained limestone beds in the Trenton are composed of between 10 and 50% micritic mud. Some of this micritic mud was potentially produced in the shallowest settings locally on the Trenton Shelf, but it is unlikely that the entire micritic mud budget is locally derived.

Estuary. Estuaries & Coastal Waterways Geomorphology (or the study of the nature and history of landforms and the processes which create them) is an easily recognisable end product of a combination of environmental factors. Under stable tectonic and sea level conditions , the gross geomorphology of coastal waterways is principally determined by the relative influence of wave, tide, and river power ( Figure 1 ; Boyd et al., 1992, Dalrymple et al., 1992), with each coastal waterway containing a distinctive suite of geomorphic and sedimentary environments. The Geology of Sedimentary Rocks – In the Playground of Giants. Introduction Few natural landscapes on Earth match the Grand Canyon of the American Southwest for scenic beauty; and fewer yet rival its precipitous depths for the sheer magnitude of geological features on display or the profound nature of the story revealed.

Carved by the Colorado River through recently uplifted terrain, its sheer cliffs and ramparts offer an unprecedented opportunity to observe a spectacular sequence of sedimentary and crystalline basement rocks and geologic structures unparalleled among natural landscapes worldwide. Any casual visitor to the Grand Canyon can see the magnificent array of rocks, lots of rocks, simply by looking over the canyon’s rim. Figure 1. The Geology of Sedimentary Rocks – In the Playground of Giants. Systems Tract - an overview. 6.2 Systems Tract A systems tract is a linkage of contemporaneous depositional systems, forming the subdivision of a sequence (Brown and Fisher, 1977). Systems tracts are interpreted on the basis of stratal stacking patterns, stratigraphic relations, and types of bounding surfaces. The definition of a systems tract is independent of physical and temporal scales; systems tracts can be observed at different scales, depending on the resolution of the data available.

The internal architecture of a systems tract may vary greatly from a succession of facies (beds and bedsets: sedimentological cycles within the lowest rank depositional systems) to a set of higher frequency sequences of lower hierarchical rank (Figs. 15 and 16). Systems tracts may be shoreline related, in downstream-controlled settings, or shoreline independent, in upstream-controlled settings (Fig. 5). 6.2.1 Falling-Stage Systems Tract Less commonly, forced regression may be accompanied by fluvial aggradation (Fig. 11B). Clastic Shelf Systems. Introduction to Sedimentary Structures - Part 1. IVF Sequence Stratigraphy. 5 ⋄ Core Studies. 5.1 High-Resolution Core Photography and Spectral Gamma-Ray Logging 5.1.1 Introduction A key element for potential production from Upper Ordovician shales, as with any shale play, is TOC.

Tidal channels can be extremely deep and dynamic and are commonly filled with large-scale cross-stratified tidal-bundle sequences and/or laterally accreted heterolithic (sandy and muddy) strata. Intertidal environments include sandy to muddy tidal flats where tidal rhytmites may form, commonly bordered by salt marshes or mangroves where muddy facies or peats accumulate. Estuaries are transgressed, drowned, river valleys where fluvial, tide, and wave processes interact; they are characterized by a net landward movement of sediment in their seaward part. Sedimentographica. Chapter2. Stratigraphy, Depositional Environments and Coalbed Methane Resources of Cherokee Group Coals (Middle Pennsylvanian)

NW European Stratigraphic Lexica. Harald Brunstad1, Felix Gradstein2, Luis Vergara3, Jan Erik Lie4 and øyvind Hammer2 1. Geologic Setting | 2. CaCO3 Its characteristics and geological application. Chert – the birthstone of our species « Writing for Nature. What is this “chert” we have been using so assiduously for the last 2 million years? Story Lane Digital Storytelling. Geology of the Coos Estuary and Lower Coos Watershed.