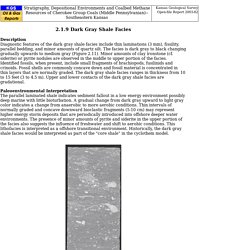 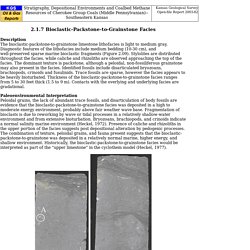 Diagnostic features of the lithofacies include medium bedding (10-30 cm), and well-preserved sparse marine bioclastic fragments (Figure 2.09). Stylolites are distributed throughout the facies, while caliche and rhizoliths are observed approaching the top of the facies. The dominant texture is packstone, although a peloidal, non-fossiliferous grainstone may also present in the facies. Identified fossils include disarticulated bryozoans, brachiopods, crinoids and fusulinids. Paleoenvironmental Interpretation Peloidal grains, the lack of abundant trace fossils, and disarticulation of body fossils are evidence that the bioclastic-packstone-to-grainstone facies was deposited in a high to moderate energy environment, probably above fair weather wave base. 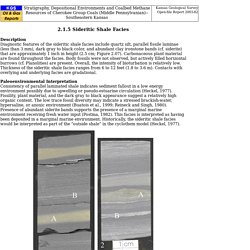 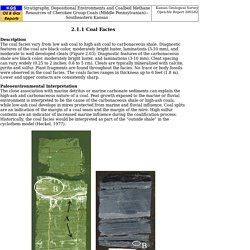 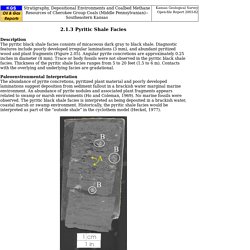 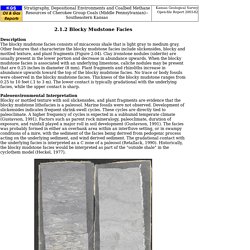 Other features that characterize the blocky mudstone facies include slickensides, blocky and mottled texture, and plant fragments (Figure 2.04). Clay ironstone nodules (siderite) are usually present in the lower portion and decrease in abundance upwards. When the blocky mudstone facies is associated with an underlying limestone, caliche nodules may be present that are 0.25 inches in diameter (8 mm). 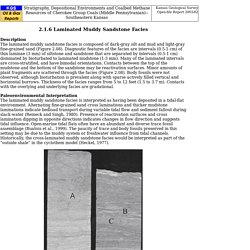 Diagnostic features of the facies are intervals (0.5-1 cm) of thin laminae (3 mm) of siltstone and sandstone that are separated by intervals (0.5-1 cm) dominated by bioturbated to laminated mudstone (1-3 mm). Many of the laminated intervals are cross-stratified, and have bimodal orientations. Contacts between the top of the mudstone and the bottom of the sandstone may be reactivation surfaces. Structural Geology: Recording planes with strike or dip? The problem of the right-hand rules.

When we want to record the orientation in space of a geological surface (e.g. a stratigraphic body), we have two different ways of doing it: a) Dip direction and dip angle: Dip direction is just the direction toward which the plane is inclined. 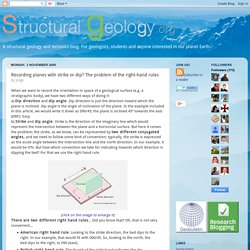 Dip angle is the angle of inclination of the plane. In the example included in this article, we would write it down as 090/45; the plane is inclined 45º towards the east (090º). Easy. b) Strike and dip angle: Strike is the direction of the imaginary line which would represent the intersection between the plane and a horizontal surface. There are two different right hand rules... American right hand rule: Looking to the strike direction, the bed dips to the right. Which would mean, no doubt, a strike of 180 and a dip direction towards the east, with a magnitude (dip angle) of 45. But what happens with measures like: What does that mean? I would suggest another right hand rule... But perhaps that is very extreme... so far.

THE PARTS OF A BRUNTON COMPASS. Novakova 2017 assessment of the precision os smart phones and tablets for measurement of planar orientations. Details?id=com.mve. FieldMove is a map-based digital field mapping app for geological data capture. 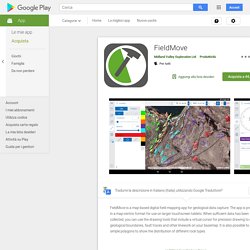 The app is presented in a map-centric format for use on larger touchscreen tablets. When sufficient data has been collected, you can use the drawing tools that include a virtual cursor for precision drawing to create geological boundaries, fault traces and other linework on your basemap. It is also possible to create simple polygons to show the distribution of different rock types. FieldMove supports Mapbox™ online maps and can cache this extensive online map service to work offline in the field. In addition to handling online maps, geo-referenced basemaps in MBTile or GeoTIFF format can be imported and also are available offline when working in the field. The app allows you to use your tablet as a traditional hand-held bearing compass, as well as a digital compass clinometer for measuring and recording the orientation of planar and linear features in the field.

Know the hardware sensors in your device. Smart Compass-Clinometer: A smartphone application for easy and rapid geological site investigation. App Functionality 2: How to Collect Data. FieldMove Clino Android User Guide. Details?id=com.mve.fieldmove. FieldMove Clino is a digital compass-clinometer for data capture on your Android phone, designed for simplicity in the field, and optimized to use the device’s GPS location and orientation sensors. 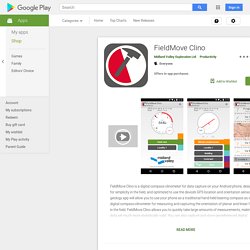 This geology app will allow you to use your phone as a traditional hand-held bearing compass as well as a digital compass-clinometer for measuring and capturing the orientation of planar and linear features in the field. FieldMove Clino allows you to quickly take large amounts of measurements, making your data set much more statistically valid. You can also capture and store georeferenced digital photographs and text notes. As well as supporting online Google Maps, FieldMove Clino also supports offline maps, so that you can import your own georeferenced basemaps and collect data while disconnected.

Data can be exported as MOVE, CSV or KMZ files and then imported directly into FieldMove™, Move™ or other applications like Google Earth. FieldMove Clino Additional Features: 12.4 Measuring Geological Structures. Geologists take great pains to measure and record geological structures because they are critically important to understanding the geological history of a region. One of the key features to measure is the orientation, or attitude, of bedding. We know that sedimentary beds are deposited in horizontal layers, so if the layers are no longer horizontal, then we can infer that they have been affected by tectonic forces and have become either tilted, or folded.

We can express the orientation of a bed (or any other planar feature) with two values: first, the compass orientation of a horizontal line on the surface—the strike—and second, the angle at which the surface dips from the horizontal, (perpendicular to the strike)—the dip (Figure 12.18). It may help to imagine a vertical surface, such as a wall in your house. StructuralLaboratory 3Dblock. Compass Guide. BRUNTON COMPASS TUTUORIAL. Brunton Compass Tutorial Brunton Compass Tutorial Introduction Azimuths vs.

Quadrants Magnetic Declination (basic concept this page) Magnetic Declination (detailed information on separate page) The Brunton Compass Recommended Readings see also the Silva compass - separate page Compass Tutorial By permission with thanks to Copyright © 1998 Steven H. Schimmrich Introduction Imagine yourself far out to sea, no land in sight, sailing in a small ship. Compasses work because a magnetized compass needle will align itself with the earth's magnetic lines of force and point approximately north. Let's take a moment to make sure we understand how such a compass works.

Now let's turn and face northeast. In transfering this to the face of a compass, the numbers increase from 0&deg; to 359&deg; in a counter-clockwise direction (to remain consistent with the reversal of E and W on compasses). C attachment 76 669. Brunton Compass 09.