How Wealth, Health, and Prosperity Are Connected. Having more money does more than give you financial security; it can also give your health a boost. 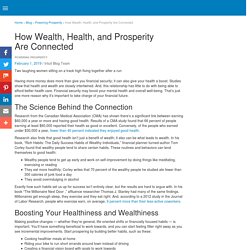 Studies show that health and wealth are closely intertwined. And, this relationship has little to do with being able to afford better health care. Financial security may boost your mental health and overall well-being. That’s just one more reason why it’s important to take charge of your financial future. The Science Behind the Connection Research from the Canadian Medical Association (CMA) has shown there’s a significant link between earning $60,000 a year or more and having good health.

Research also finds that good health isn’t just a benefit of wealth; it also can be what leads to wealth. Wealthy people tend to get up early and work on self-improvement by doing things like meditating, exercising or readingThey eat more healthily; Corley writes that 70 percent of the wealthy people he studied ate fewer than 300 calories of junk food a dayThey avoid overindulging in alcohol. How Wealth, Health, and Prosperity Are Connected. 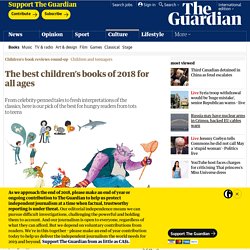 The sector was worth £381.9m in 2017, according to Nielsen BookScan, and 2018 may well top that. One in every three physical books sold is now a children’s book. Judging by bestseller charts and supermarket displays you’d be forgiven for thinking that most of those were by celebrities. Famous faces certainly continue to sell in big numbers: David Walliams’s The Ice Monster (HarperCollins), David Baddiel’s Head Kid (HarperCollins) and Greg James and Chris Smith’s Kid Normal series (Bloomsbury) are among the year’s most notable.

But beyond this, a rich and varied landscape of books for children and young adults is very much in evidence. Why such a renaissance? The best picture books, chosen by Imogen Carter Call me optimistic, but change definitely seems afoot in children’s picture books, with more female characters and people of colour taking centre stage. Julian Is a Mermaid by Jessica Love (Walker) is fabulous in every sense. 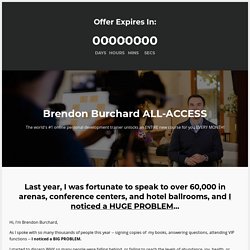 I started to discern WHY so many people were falling behind, or failing to reach the levels of abundance, joy, health, or success they really wanted in life. Something else happened this year, too. My online personal development videos passed over 100 MILLION views, and my Facebook pages boomed passed 10 MILLION fans. People have now watched over NINE MILLION HOURS of my online videos... So, as you can imagine, I got a lot of comments and questions via social media. And, AGAIN, I notice the SAME BIG PROBLEM. The problem I’m seeing wasn’t just at conferences or online, either. I happen to coach many of the world’s most successful people. But many of these highly-successful people ALSO faced the SAME BIG PROBLEM.

It seemed everyone was dealing with it. I bet you are too. Beginner's Guide to Bitcoin. Bitcoin has exploded over 2,000% in 2017... 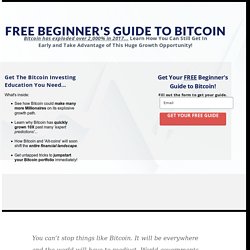 Learn How You Can Still Get In Early and Take Advantage of This Huge Growth Opportunity! Copyright 2017 Investing Shortcuts You can’t stop things like Bitcoin. It will be everywhere and the world will have to readjust. World governments will have to readjust.” - John McAfee, Founder of McAfee What’s in the ebook? The success or failure of every business is largely dependent upon its leaders. The biggest mistake almost every CEO makes and how it’s limiting your growthHow to work ON the business, not IN the business How to use the 80/20 principle to find clarity and focusInsights and ideas from scripture and successful Christian entrepreneurs3 new leadership strategies to breakthrough to new levels of success The 6 Areas of Excellence. 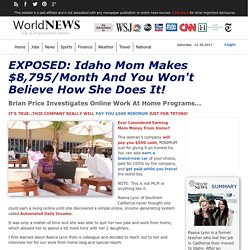 This woman's company will pay you $500 cash, MINIMUM just for giving it an honest try. You can also earn a brand-new car of your choice, paid for 100% by the company, and get paid while you travel the world too. NOTE: This is not MLM or anything like it. Raena Lynn of Southern California never thought she could earn a living online until she discovered a simple online, income-generating system called Automated Daily Income.

It was only a matter of time and she was able to quit her two jobs and work from home, which allowed her to spend a lot more time with her 2 daughters. I first learned about Raena Lynn from a colleague and decided to reach out to her and interview her for our work from home blog and special report. In our skype interview she told me how she was nearly homeless before she discovered this unique work-from-home system. A check Raena Lynn received using the Automated Daily Income System "As a teacher, I just could never get ahead. Attend The 6th Annual Brain-A-Thon.