Mediaura is an award winning digital agency with a team of search and social marketing experts, web and mobile developers, creative designers, and strategists. We can create, execute, and report on a strategy that will generate more awareness and ROI for your brand. 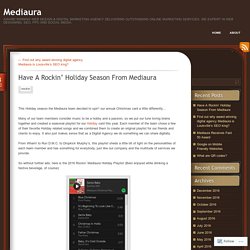 Each member of the team chose a few of their favorite Holiday related songs and we combined them to create an original playlist for our friends and clients to enjoy. It also just makes sense that as a Digital Agency we do something we can share digitally. From Wham! To Run D.M.C. to Dropkick Murphy’s, this playlist sheds a little bit of light on the personalities of each team member and has something for everybody, just like our company and the multitude of services we provide. Mediaura: Mediaura Receives Fast 50 Award. Mediaura is pleased to announce that Louisville Business First at the Fast 50 Awards once again honored us with their recognition. 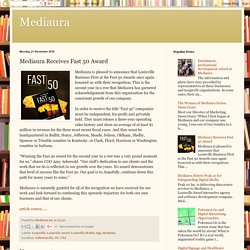 This is the second year in a row that Mediaura has garnered acknowledgement from this organization for the consistent growth of our company. In order to receive the title “Fast 50” companies must be independent, for-profit and privately held. They must release a three-year operating sales history and show an average of at least $1 million in revenue for the three most recent fiscal years. Mediaura: Digital Agency Louisville, Digital Ad Marketing, Ad Agency Louisville, Jeffersonville, Orlando. Graphic Design in Louisville, Best Logo Design in Jeffersonville & Orlando. Louisville SEO Company, Jeffersonville, Orlando. What are QR codes? You’ve probably seen them by now. 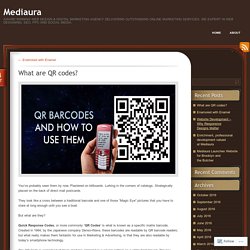 Plastered on billboards. Lurking in the corners of catalogs. Strategically placed on the back of direct mail postcards. They look like a cross between a traditional barcode and one of those “Magic Eye” pictures that you have to stare at long enough until you see a boat. But what are they? Quick Response Codes, or more commonly “QR Codes” is what is known as a specific matrix barcode. The QR Code is comprised of black modules arranged in a square pattern on a white background. There are a wide-variety of ways that QR Codes can be utilized as a “Call to Action” for consumers or potential clients. Some commonly used methods are: There is seemingly no limit to the innovative ways QR Codes can be implemented or what information they can provide. 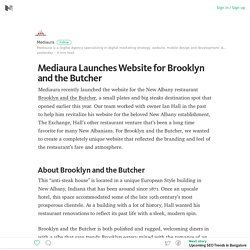 Our team worked with owner Ian Hall in the past to help him revitalize his website for the beloved New Albany establishment, The Exchange, Hall’s other restaurant venture that’s been a long time favorite for many New Albanians. For Brooklyn and the Butcher, we wanted to create a completely unique website that reflected the branding and feel of the restaurant’s fare and atmosphere. About Brooklyn and the Butcher This “anti-steak house” is located in a unique European Style building in New Albany, Indiana that has been around since 1871. Once an upscale hotel, this space accommodated some of the late 19th century’s most prosperous clientele.

Creating the Website Our team came up with a clean, simple layout that really plays into the sleek, modern yet timeless vibe of the restaurant. Landing page. Enamored with Enamel. (Jen might not want to talk about her flair, but we LOVE talking about our flair.) 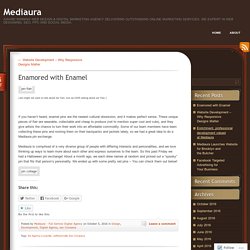 If you haven’t heard, enamel pins are the newest cultural obsession, and it makes perfect sense. These unique pieces of flair are wearable, collectable and cheap to produce (not to mention super cool and cute), and they give artists the chance to turn their work into an affordable commodity. Some of our team members have been collecting these pins and rocking them on their backpacks and jackets lately, so we had a great idea to do a Mediaura pin exchange. Mediaura is comprised of a very diverse group of people with differing interests and personalities, and we love thinking up ways to learn more about each other and express ourselves to the team. Facebook Targeted Advertising for Your Business. It’s not news to anyone that advertisements are running the show on Facebook these days. 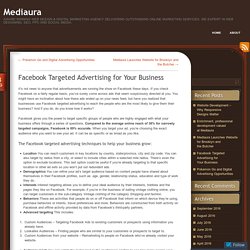 If you check Facebook on a fairly regular basis, you’ve surely come across ads that seem suspiciously directed at you. You might have an inclination about how these ads ended up on your news feed, but have you realized that businesses use Facebook targeted advertising to reach the people who are the most likely to give them their business? And if you do, do you know how it works? Facebook gives you the power to target specific groups of people who are highly engaged with what your business offers through a series of questions.

Compared to the average online reach of 38% for narrowly targeted campaigns, Facebook is 89% accurate. Mediaura Selects Peak 10 for Safeguarding Digital Media : mediaura. Facebook Targeted Advertising for Your Business. Enrichment, professional development valued at Mediaura. The information and photo here were provided by representatives at those businesses and nonprofit organizations. 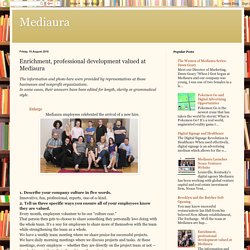