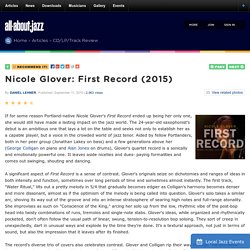 The 24-year-old saxophonist's debut is an ambitious one that lays a lot on the table and seeks not only to establish her as a capable player, but a voice in the crowded world of jazz tenor. Aided by fellow Portlanders, both in her peer group (Jonathan Lakey on bass) and a few generations above her (George Colligan on piano and Alan Jones on drums), Glover's quartet record is a sonically and emotionally powerful one. Michel Nirenberg: Retrato/Portrait. It only takes a few seconds of listening to "Chorinho Em Aldeia/Na Gloria"—the album-opening track on Retrato/Self Portrait—to realize there's something special about Michel Nirenberg's playing. 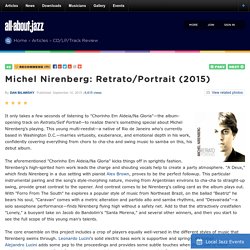 This young multi-reedist—a native of Rio de Janeiro who's currently based in Washington D.C. —marries virtuosity, exuberance, and emotional depth in his work, confidently covering everything from choro to cha-cha and swing music to samba on this, his debut album. The aforementioned "Chorinho Em Aldeia/Na Gloria" kicks things off in sprightly fashion. Nirenberg's high-spirited horn work leads the charge and shouting vocals help to create a party atmosphere. Why Do Young Clarinet Players Play Flat?Teen Jazz. This is a guest post from Rheuben Allen, taken from his site with permission. 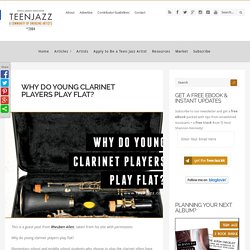 Why do young clarinet players play flat? Elementary school and middle school students who choose to play the clarinet often have an issue playing in tune. But they’re not necessarily to blame. Randy Brecker: RandyPOP! This album gives new meaning to the idea of rewriting history. 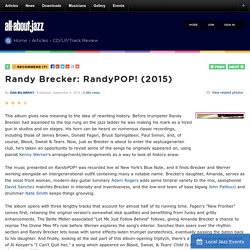 Before trumpeter Randy Brecker had ascended to the top rung on the jazz ladder he was making his mark as a hired gun in studios and on stages. His horn can be heard on numerous classic recordings, including those of James Brown, Donald Fagen, Bruce Springsteen, Paul Simon, and, of course, Blood, Sweat & Tears. Now, just as Brecker is about to enter the septuagenarian club, he's taken an opportunity to revisit some of the songs he originally appeared on, using pianist Kenny Werner's arrangements/derangements as a way to look at history anew. 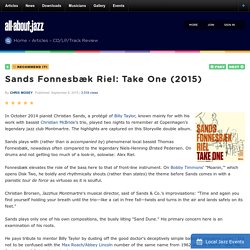 The highlights are captured on this Storyville double album. Sands plays with (rather than is accompanied by) phenomenal local bassist Thomas Fonnesbæk, nowadays often compared to the legendary Niels-Henning Ørsted Pedersen. Build Your Music Brand Platform Online. Now, more than ever before, your next fan is more likely to discover you and your music online than they are to find out about you at a show. 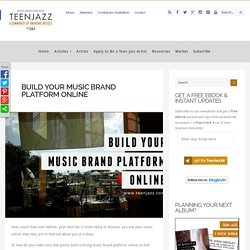 So how do you make sure that you’ve built a strong music brand platform online so that discovery leaves a positive impression? How do you make sure that potential fans who discover you online stick around, listen to your music, and check in with you for updates? But before we get into how to keep fans coming back for more, there’s something else that’s worth mentioning. It isn’t just artist discovery that’s primarily online. Album launches and marketing are also mostly on the web now. Dave Liebman: Expansions: The Puzzle. NEA Jazz Master saxophonist Dave Liebman has kept his music alive and generative for five decades with a prolific recording output, forming signature groups that push the musical envelope, and advancing new ideas within time-tested parameters. 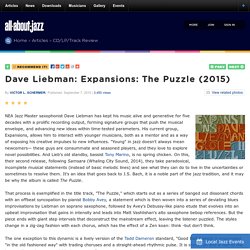 His current group, Expansions, allows him to interact with younger musicians, both as a mentor and as a way of exposing his creative impulses to new influences. "Young" in jazz doesn't always mean newcomers— these guys are consummate and seasoned players, and they love to explore novel possibilities. And Lieb's old standby, bassist Tony Marino, is no spring chicken. On this, their second release, following Samsara (Whaling City Sound, 2014), they take paradoxical, incomplete musical statements (instead of basic melodic lines) and see what they can do to live in the uncertainties or sometimes to resolve them. Sinne Eeg & Thomas Fonnesbæk: Eeg-Fonnesbæk. 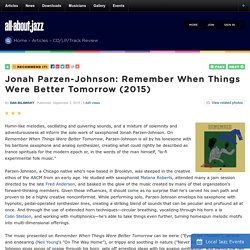 On Remember When Things Were Better Tomorrow, Parzen-Johnson is all by his lonesome with his baritone saxophone and analog synthesizer, creating what could rightly be described as trance spirituals for the modern epoch or, in the words of the man himself, "lo-fi experimental folk music. " Parzen-Johnson, a Chicago native who's now based in Brooklyn, was steeped in the creative ethos of the AACM from an early age. He studied with saxophonist Matana Roberts , attended many a jam session directed by the late Fred Anderson, and basked in the glow of the music created by many of that organization's forward-thinking members. Given those influences, it should come as no surprise that he's carved his own path and proven to be a highly creative nonconformist.

A Community for Up and Coming Musicians. Amongst the language learning community, there are a lot of products marketed to learners as being the newest and fastest way to learn a language. 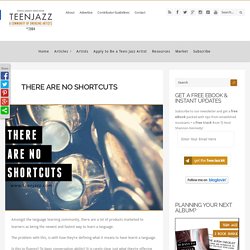 The problem with this, is with how they’re defining what it means to have learnt a language. Is this to fluency? To basic conversation ability? It is rarely clear just what they’re offering and what they mean by just how much of the language you’ll learn. From my personal experience, and that of my language learning friends, there isn’t any way to learn a language other than by putting in the time and using that time effectively. There is no fast or easy way. Space-cassava-kutiman-self-produced-review-by-roger-farbey. Rob Reddy: Bechet: Our Contemporary. Jon Irabagon: Inaction is An Action. How to Learn Something from Any Situation. When we make the transition from school to the real world, maintaining our learning curve can present a challenge. 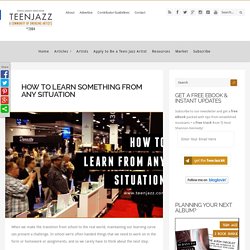 In school we’re often handed things that we need to work on in the form or homework or assignments, and so we rarely have to think about the next step. But what happens when you no longer have someone telling you what to do to get better? How do you find the direction that you need to continue improving? One of the easiest ways ways to get direction whenever you feel as though you’re struggling is to study with a good teacher. Heads of State: Search For Peace. Much like another group of distinguished jazz veterans, namely The Cookers, the premise here was a simple one. Get together a crew of like-minded musicians with a track record of shared experiences and see where the music takes things. Fred Hersch: Fred Hersch Solo. Michael Houstoun with the Rodger Fox Big Band: Concerti. There is a saying about "the best of both possible worlds," an adage that springs immediately to mind when listening to Concerti, a remarkable collaboration between classical pianist Michael Houstoun and trombonist Rodger Fox's superb big band from Wellington, New Zealand.

The captivating program consists of four extended works, two by American pianist / composer Bill Cunliffe, another by New Zealand's own Mike Nock, and the first movement of Sergei Prokofiev's lyrical and dramatic Piano Concerto No. 3, astutely arranged by Cunliffe for a large jazz ensemble. Although Houstoun is not a jazz pianist per se, he has an unequivocal fondness for the music, clearly knows how to swing (as he does with abandon on the Prokofiev concerto and elsewhere), and every note he chooses to play is valid and germane. As for Fox's band, it is as impressive as they come and squarely on the mark from the outset. And Houstoun, who also comps quite well. Tiffany Austin: Nothing But Soul.

While countless artists have covered the music of Hoagy Carmichael, album-length tributes from a single artist saluting his work aren't all that common; Carmichael salutes that reshape some of his most beloved compositions are, understandably, even more scarce, as there are heavy risks involved in toying with the nature of his treasured songs. Tiffany Austin, however, isn't afraid of expressing her love of Carmichael's work in her own sweetly soulful way. Bret Higgins' Atlas Revolt: Bret Higgins' Atlas Revolt. 13 Things No One Told Me About Being A Professional MusicianTeen Jazz. I began my career as a professional musician while in high school and I’ve learned more outside of school these past few years than I did in all of my time in school (and I went to school through a Master’s degree). Some of the lessons that I’ve learned were much harder than others, but I’m grateful for all of the knowledge I’ve gained throughout my career.

Despite the fact that no one told me the following about being a professional musician, I’d like to share some of what I’ve learned with you. Finding the motivation to work as a self-employed, independent musician isn’t always easy. There are some days that you just don’t feel like doing anything, but you need to push through it and sit down to do the work anyway.How little your the role your actual playing plays on a day to day basis. It isn’t hours of practice and nothing but performances all day, every day. The Dan Trudell Trio: Dan Trudell Plays The Piano. Liberty Ellman: Radiate. Guitarist Liberty Ellman works at the crossroads of intellectual inquisitiveness and rabid expressionism.