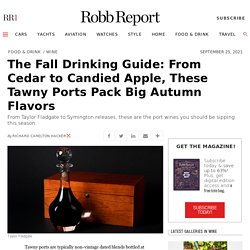 But this month, Taylor Fladgate, which boasts one of Portugal’s largest reserves of older cask-aged wines, released a rare vintage-dated, unblended Single Harvest Tawny from its famous 1896 crop, representing one of the finest harvests of the 19th century and which signaled a renewal for the area following a devastating phylloxera epidemic. Pro Tips for Serving Port. Port: This fortified sweet wine is made with a blend of red grapes from the Douro River Valley in Portugal. 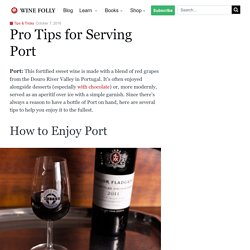 It’s often enjoyed alongside desserts (especially with chocolate) or, more modernly, served as an aperitif over ice with a simple garnish. Since there’s always a reason to have a bottle of Port on hand, here are several tips to help you enjoy it to the fullest. Introduction to Port Wine - Taylor Fladgate. Port is one of the great classic European wines and its history is a long and fascinating one. 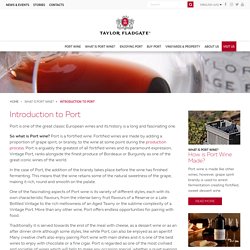 So what is Port wine? Port is a fortified wine. Fortified wines are made by adding a proportion of grape spirit, or brandy, to the wine at some point during the production process. Port is arguably the greatest of all fortified wines and its paramount expression, Vintage Port, ranks alongside the finest produce of Bordeaux or Burgundy as one of the great iconic wines of the world. In the case of Port, the addition of the brandy takes place before the wine has finished fermenting.

Pro Tips for Serving Port. What is Port Wine? Port is a sweet, red, fortified wine from Portugal. 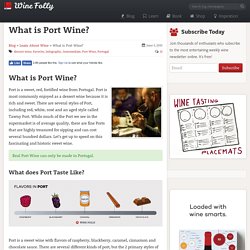 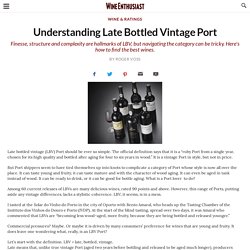 The official definition says that it is a “ruby Port from a single year, chosen for its high quality and bottled after aging for four to six years in wood.” It is a vintage Port in style, but not in price. But Port shippers seem to have tied themselves up into knots to complicate a category of Port whose style is now all over the place. It can taste young and fruity, it can taste mature and with the character of wood aging. It can even be aged in tank instead of wood. Among 60 current releases of LBVs are many delicious wines, rated 90 points and above. I tasted at the Solar do Vinho do Porto in the city of Oporto with Bento Amaral, who heads up the Tasting Chamber of the Instituto dos Vinhos do Douro e Porto (IVDP).

Commercial pressures? Let’s start with the definition. Once bottled, LBV should be ready to drink, not several years down the road. The full primer on LBV is available in our March 2010 issue. 91 Dow’s; $22. Understanding Late Bottled Vintage Port. Styles of Port and Their Pairings. Port is the most recognizable name in fortified dessert wines. 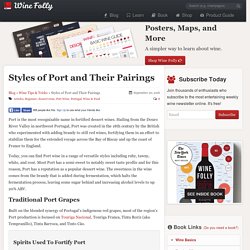 Hailing from the Douro River Valley in northwest Portugal, Port was created in the 18th century by the British who experimented with adding brandy to still red wines, fortifying them in an effort to stabilize them for the extended voyage across the Bay of Biscay and up the coast of France to England. Today, you can find Port wine in a range of versatile styles including ruby, tawny, white, and rosé. Undervalued Wine Categories: Late Bottled Vintage Port. Port is a category of wine that conjures up different images depending on your experience or taste. 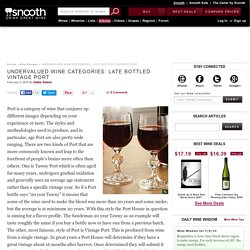 The styles and methodologies used to produce, and in particular, age Port are also pretty wide ranging. There are two kinds of Port that are more commonly known and leap to the forefront of people’s brains more often than others. One is Tawny Port which is often aged for many years, undergoes gradual oxidation and generally uses an average age statement rather than a specific vintage year. So if a Port bottle says “20 year Tawny” it means that some of the wine used to make the blend was more than 20 years and some under, but the average is at minimum 20 years. Top Port Sherry Madeira Best Wines Ratings Prices. Dow's 40 Years Old Tawny Porto Douro, Portugal 15.5/20 — Masterfully aged in oak casks, this fine amber port seduces with warm aromas of nuts, raisins and vanilla; On the palate, flavors of dried fruits and walnuts lead to a long complex finish. $162 (750 ml) Taylor Fladgate 2009 Vintage Porto Douro, Portugal 15.5/20 — This complex, masculine port is well-defined, with a dense mouthfeel and firm tannins. $110 (750 ml) Fonseca 2009 Vintage Port Douro, Portugal 15/20 — With good texture and flavors of blackcurrant, this vintage promises an excellent capability to age well. 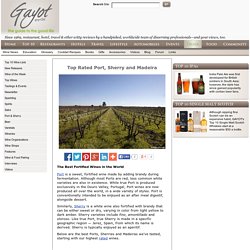 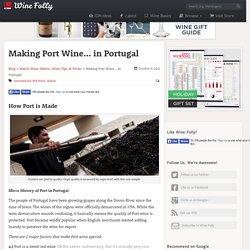 Grape quality is measured by sugar level with this core sample. Micro History of Port in Portugal The people of Portugal have been growing grapes along the Douro River since the time of Jesus. The wines of the region were officially demarcated in 1756. Taylor Fladgate Vintage Port Tasting Episode #717. Review: Taylor Fladgate 1964 Single Harvest Port. We hope you’re sitting down. 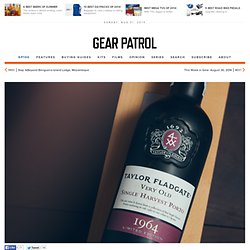 If not, find a leather club chair, dim the lights, cross your legs, tune your gramophone or iPhone to your preferred string quartet and place your left hand on the well-groomed head of your faithful Chinook. Now do some thumb stretches and shake out your right hand, your drinking hand, to get it good and relaxed. As a final step, call out to any loved ones in the vicinity to bring you a small plate of chocolates and the finest cigar available.

Kopke Vintage Port tasting. At the Wine Society 18% we arranged a tasting on the 21st of March of the oldest port house – Kopke. Kopke is perhaps more known for their Tawnies and cheaper ports but they have been producing Vintage Port since the 19th century. We started the evening with the 300 years jubilee dry tawny (1638 – 1938). It was a very typical nice tawny with a very dry style. It was probably not meant to be kept for another 75 years but it was still a very decent and fresh wine. For the tasting we had set up eleven, what we thought would be, mature and nice Vintages. The following Vintage Ports were in the tasting: Vintage 1997Vintage 1996Vintage 1995Vintage 1994Vintage 1991Vintage 1987 Quinta Sao LuizVintage 1985Vintage 1979 Quinta Sao LuizVintage 1979Vintage 1974Vintage 1970 The first three were still very young.

All four Vintages from the 1970′s were very elegant and nice. For points and tasting notes see our Kopke page and Quinta Sao Luiz page. Ports Worth Trying. The holiday season is prime dessert wine drinking time for several reasons. It’s hard to drink a lot of dessert wine. They come after a huge meal and many other wines. We are full. Please not a wafer, no! Add in the fact that many dessert wines are high in alcohol and pack in a ton of sugar and you can see why it can be so challenging to finish a bottle.

That means we can’t break out the swill for their disposal. The signature house style Ports from the big houses fit the bill perfectly. Share one or more with your besties this holiday season, and here’s a tip, don’t save it for the end of the meal. Dessert Wine image via Shutterstock. Sandeman Launches 2011 Vintage Port. Each year, less than two percent (2%) of port is declared “vintage”, meaning that it comes from the same year. These wines can be found in vintage or late bottled vintage ports. Generally, port contains wines from multiple vintages in order to preserve the style of the port house.

In this regard, it’s very similar to Champagne houses, like Veuve Clicquot or Perrier Jouet.