Umbrellas Down. Umbrellas Up. Battle For Hong Kong. Umbrellas Up. Words of Warning in the People’s Daily. In a front page commentary today, the Chinese Communist Party’s official People’s Daily newspaper sent one of its strongest signals yet that the leadership is not prepared to acknowledge the demands of Hong Kong protesters, or to reach any sort of compromise. 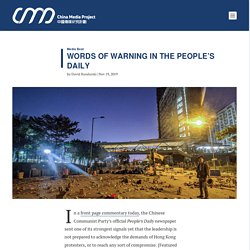 [Featured image by Studio Incendo under CC license.] “On this question concerning national sovereignty, concerning the fate of Hong Kong,” says the editorial, “there is no middle ground, there is not the least bit of margin for compromise.” The piece, attributed to “a commentator from this paper,” or benbao pinglunyuan (本报评论员), marking it as executed by top staff representing views at senior levels of the Party, referred to a “struggle” between the protection and destruction of “one country, two systems.” The word “struggle,” a legacy of China’s pre-reform era, has become a prominent feature of Xi Jinping’s more hardline political language. What can this thick crust of discourse possibly mean?

The identity crisis behind Hong Kong's protests. Umbrellas Up. How China Unleashed Twitter Trolls to Discredit Hong Kong’s Protesters. For fans of pro tennis, European soccer and British tabloids, the mysterious Twitter account had a lot to offer. 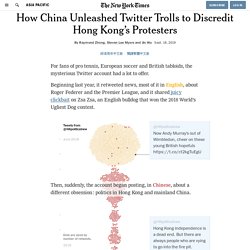 Beginning last year, it retweeted news, most of it in English, about Roger Federer and the Premier League, and it shared juicy clickbait on Zsa Zsa, an English bulldog that won the 2018 World’s Ugliest Dog contest. Tweets from @HKpoliticalnew Now Andy Murray’s out of Wimbledon, cheer on these young British hopefuls Hong Kong independence is a dead end. Dots are sized by number of retweets. The United States is funding ‘Hong Kong independence’ and brainwashing deadbeat kids #spieseverywhere #colorrevolution #hongkong.

Aerial footage shows extent of Hong Kong protest - BBC News. China’s Government Wants You to Think All Mainlanders View Hong Kong the Same Way. They Don’t. Are mainland Chinese, especially tech-savvy millennials, overwhelmingly hostile, unsympathetic, or indifferent towards the protests that have engulfed Hong Kong over the past three months? 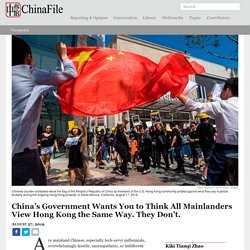 Both the Chinese government and the international media seem to think so. They flood the Internet with messages calling protesters in Hong Kong “useless youth.” They send obscene messages and death threats to supporters of the Hong Kong demonstrations. Mainland Chinese Sneak Into Hong Kong’s Protests—to Support the Cause. China’s Hong Kong Dilemma. Just before Hong Kong returned to Chinese control in 1997, a team of behavioral scientists conducted a fascinating experiment. 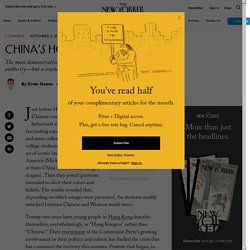 Ying-yi Hong and some colleagues recruited local college students and showed them a set of iconic images either from America (Mickey Mouse, a cowboy) or from China (the Monkey King, a dragon). Then they posed questions intended to elicit their values and beliefs. The results revealed that, depending on which images were presented, the students readily switched between Chinese and Western world views. Twenty-two years later, young people in Hong Kong describe themselves, overwhelmingly, as “Hong Kongers” rather than “Chinese.” Their resentment of the Communist Party’s growing involvement in their politics and culture has fuelled the crisis that has consumed the territory this summer. Last Monday, Twitter accused China of a “coordinated state-backed” operation “specifically attempting to sow political discord in Hong Kong.” YouTube. China Is Waging a Disinformation War Against Hong Kong Protesters.

BEIJING — When a projectile struck a Hong Kong woman in the eye this week as protesters clashed with the police, China responded quickly: Its state television network reported that the woman had been injured not by one of the police’s bean bag rounds, but by a protester. 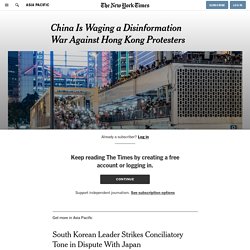 The network’s website went further: It posted what it said was a photo of the woman counting out cash on a Hong Kong sidewalk — insinuating, as Chinese reports have claimed before, that the protesters are merely paid provocateurs. The assertion was more than just spin or fake news. The Communist Party exerts overwhelming control over media content inside China’s so-called Great Firewall, and it is now using it as a cudgel in an information war over the protests that have convulsed Hong Kong for months. In recent days, China has more aggressively stirred up nationalist and anti-Western sentiment using state and social media, and it has manipulated the context of images and videos to undermine the protesters. 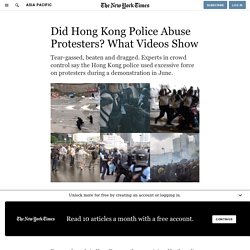 Dozens of people in Hong Kong say they were injured by the police during a mass demonstration in June against a contentious bill that would allow extraditions to mainland China. The New York Times reviewed hundreds of videos and photos posted online by witnesses, along with submissions to our WhatsApp tip line, to assess whether the Hong Kong police used excessive force.

Experts at Amnesty International, a human rights group, helped examine the footage. We spoke to specialists in crowd control and interviewed more than two dozen protesters.