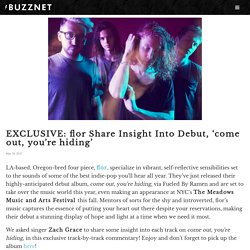 They’ve just released their highly-anticipated debut album, come out, you’re hiding, via Fueled By Ramen and are set to take over the music world this year, even making an appearance at NYC’s The Meadows Music and Arts Festival this fall. Mentors of sorts for the shy and introverted, flor’s music captures the essence of putting your heart out there despite your reservations, making their debut a stunning display of hope and light at a time when we need it most. We asked singer Zach Grace to share some insight into each track on come out, you’re hiding, in this exclusive track-by-track commentary! Enjoy and don’t forget to pick up the album here! Mixcloud. Phillip Roebuck - LITTLE BO PEEP. Can't Take My Eyes Off You - Frankie Valli (Lyrics)

ARCHIVE - YOU MAKE ME FEEL. Everglow lyrics. Oh they say people come, say people go this particular diamond was extra special and though you might be gone, and the world may not know still I see you, celestial like a lion you ran, a goddess you rolled like an eagle you circled, in perfect purple so how come things move on, how come cars don’t slow when it feels like the end of my world when I should but I can’t let you go? 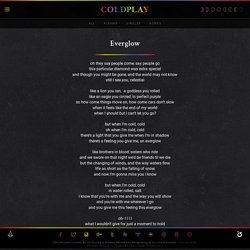 But when I’m cold, cold oh when I’m cold, cold there’s a light that you give me when I’m in shadow there’s a feeling you give me, an everglow like brothers in blood, sisters who ride and we swore on that night we’d be friends til we die but the changing of winds, and the way waters flow life as short as the falling of snow and now I’m gonna miss you I know. Dschinghis Khan - Moskau 1979. Daler Mehndi - Tunak Tunak Tun Video. VITAS - Седьмой элемент (The 7th Element) [10 hours] VITAS - Посвящение / Dedication. All Ways Home (the Home Side) – Brian Dunn. Coldplay in Concert 2014/2015 - First Listen: Sufjan Stevens, 'Carrie & Lowell' SOLAR ECHOES - Nigel John Stanford. Nigel Stanford - Downloads. Nigel Stanford Solar Echoes 2014 - Double Album Includes "Cymatics", three other unreleased tracks, and all new recordings of the entire album "Deep Space" Album Download: $9.95 mp3 and uncompressed wav Cymatics 2014 - Single & Music Video Cymatics is the first single from the Album "Solar Echoes". 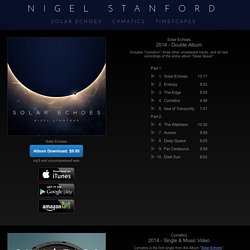 Mp3 Single: $0.99 4K Video: $9.95 4k, UHD, and HD files + music. A Visual Representation Of The Relationship Between Science And Music. Nigel John Stanford is a musician from New Zealand who is well-known for his work in the genres of Ambient and New Age music. 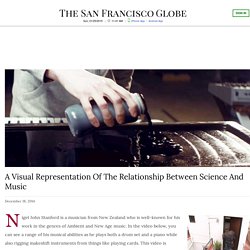 In the video below, you can see a range of his musical abilities as he plays both a drum set and a piano while also rigging makeshift instruments from things like playing cards. This video is entitled 'Cymatics,' and cymatics is the science of creating visualizations of audio frequencies. On his website, Stanford explains how he became interested in visualizing sound: "In 1999 I watched a documentary on 'Synesthesia' - a disorder that effects the audio and visual functions of the brain. People with the disorder hear a sound when they see bright colors, or see a color when they hear various sounds. AKS - Round & Round by AKS (Addicted Kru Sound) on SoundCloud. Tunespeak. (If You're Wondering If I Want You To) I Want You To.

Coldplay - Christmas Lights (Live at Under 1 Roof 2013) The Guitar Dater Project - Fender Serial Number Decoder. Dynah - Promise - Music Video. SWITCHFOOT LYRICS - Let Your Love Be Strong. In this world of news, I've found nothing new I've found nothing pure Maybe I'm just idealistic to assume that truth Could be fact and form That love could be a verb Maybe I'm just a little misinformed As the dead moon rises, and the freeways sigh Let the trains watch over the tides and the mist Spinning circles in our skies tonight Let the trucks roll in from Los Angeles Maybe our stars are unanimously tired Let your love be strong, and I don't care what goes down Let your love be strong enough to weather through the thunder cloud Fury and thunder clap like stealing the fire from your eyes All of my world hanging on your love Let the wars begin, let my strength wear thin Let my fingers crack, let my world fall apart Train the monkeys on my back to fight Let it start tonight When my world explodes, when my stars touch the ground Falling down like broken satellites. 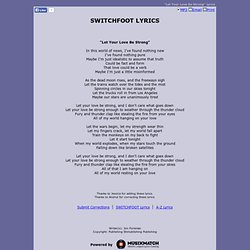