The archive ,a history of Uk rock festivals -1960-92: January 2016. Hawkwind and the pink fairies at the isle of wight festival1970. Updated September 2012, New pictures of the site and audience Dec 2011 new photos of the Pye Recording crew and Miles Davis's engineer Stan Tonkel and producer Teo Macero Best viewed at 1280 x 1024 res . 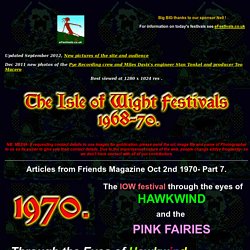 NB: MEDIA- If requesting contact details to use images for publication, please send the url, image file and name of Photographer to us so its easier to give you their contact details. Home. David Bowie and the Occult — The Laughing Gnostic — Magick and Gnosticism — Golden Dawn — Aleister Crowley — Kabbalah — Kenneth Anger — Arthur E. Waite — Chime (Chimi) Youngdong Rimpoche — Charles Manson — Dion Fortune — Derek Jarman — Tree of Life — Seph. Keep It Together by Rich Deakin.

Keep It Together by Rich Deakin You Searched For: Author: rich deakin, Title: keep it together Edit Your Search Results (1 - 4) of 4. 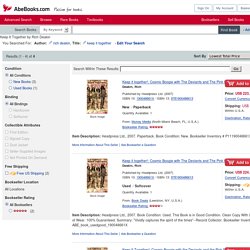 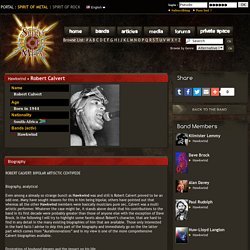 Many have sought reasons for this in him being bipolar, others have pointed out that whereas all the other Hawkwind members were basically musicians pure sec, Calvert was a multi artistic performer. Whatever the case might be, it stands above doubt that his contributions to the band in its first decade were probably greater than those of anyone else with the exception of Dave Brock.

In the following I will try to highlight some facets about Robert’s character, that are hard to find in any detail in the many existing biographies of him that are available. Www.originalgodz.com. Progressive Rock Music Ultimate Discography ... with Free MP3, Videos and Reviews. 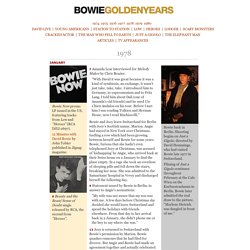 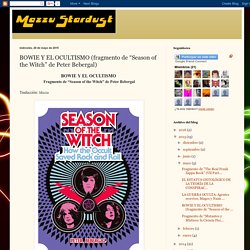 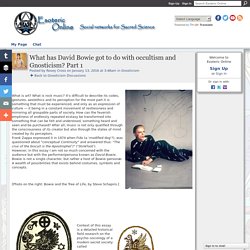 He has always styled himself as a creature dwelling in the "human zoo", tattooed with Tarot cards (like Ray Bradbury's 1951 'Illustrated Man'); a 'Karma–Man' (which dates from 1967, and was on the live set list until 1970, talking about Zen–Buddhism joining the Tibet Society in 1967 with his then producer Tony Visconti) sitting "on my karma, dame meditation" ('Little Wonder', 1997) and being a 'Silly Boy Blue' (1966, "Child of Tibet", "Mountains of Lhasa") who never leaves his body now and so has "got to wait to die". — (On the live set list in 2001)'Dame meditation' most probably refers to the Kundalini, the yogic fire–snake that resides in the genital region, coiled waiting to arise to the head of the yogi and enable illumination symbolised by a lotus flower. 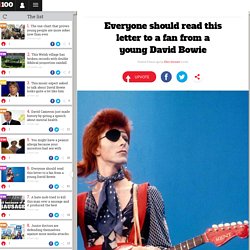 Sandra's uncle was a local radio station manager who had recently given her a promo copy of Bowie's debut album. After listening Sandra wrote to Bowie to tell him that his music was as good as The Beatles, offering to kick off a fan club for him in the US. According to Letters of Note where the original transcript is published, the young musician - who had yet to enjoy mammoth global success - was thrilled and immediately wrote back to Sandra from the office of his manager Kenneth Pitt.

Dear Sandra, When I called in this, my manager's office, a few moments ago I was handed my very first American fan letter - and it was from you. I was so pleased that I had to sit down and type an immediate reply, even though Ken is shouting at me to get on with a script he badly needs. The Ziggy Stardust Companion - Album rear cover. The image above is of the album's rear cover as seen on the original 1972 LP. 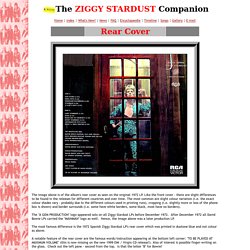 Like the front cover - there are slight differences to be found in the releases for different countries and over time. The most common are slight colour variation (i.e. the exact colour shades vary - probably due to the different colours used in printing runs), cropping (i.e. slightly more or less of the phone box is shown) and border surrounds (i.e. some have white borders, some black, most have no borders). The "A GEM PRODUCTION" logo appeared solo on all Ziggy Stardust LPs before December 1972. After December 1972 all David Bowie LPs carried the "MAINMAN" logo as well. Hence, the image above was a later production LP. Larry Wallis interview. Guess The Correct Number Of Drug References Here & Win A Pony Larry Wallis interview by Tony Rettman (June 2002)Some legends never die, they just wait around for last call. 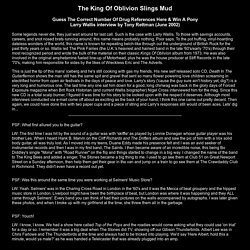 Such is the case with Larry Wallis. To those with savings accounts, careers, and snot nosed brats running around, this name means probably nothing. Poor saps. To the pot huffing, vinyl-hoarding dateless wonders of the world, this name is known for repeating belch-like through out the underground of British Rock for the past thirty years or so. Wallis led The Pink Fairies (the U.K.' Deep purple a to z. Deep Purple History: 48 Margaret Street once housed the famous 'The Speakeasy' club, where Mk 2 played their first gig. 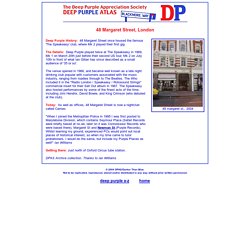 The Details: Deep Purple played twice at The Speakeasy in 1969, Mk 1 on March 20th just before their second US tour, Mk 2 on July 10th in front of what Ian Gillan has since described as a small audience of '35 or so'. The venue opened in 1966, and became well known as a late night drinking club popular with customers associated with the music industry, ranging from roadies through to The Beatles. The Pink Fairies - Live At The Roundhouse/Previously Unreleased/Do It EP (MP3) - Ace Records. We offer free P&P to UK addresses. For all other territories packaging is free and postage is charged on a weight basis. We use Royal Mail First Class for UK deliveries and standard Air Mail for all other territories, very large orders will usually be sent via parcelforce. You may cancel your order at any time prior to your order being dispatched by emailing us at orders@acerecords.com ensuring that you quote your name, address and order reference number or by telephoning +44 (0) 208 453 1311 between 9am and 5pm GMT/BST, Monday to Friday.

Please note: As music downloads are dispatched immediately after purchase, there is no possibility of cancelling these orders. You have the right to cancel your order within seven days of purchase, or seven days of receipt of the goods (whichever is the longer). Hartbeat! / Gorilla Beat - Shakin` All Over - Smash...! Boom...! Bang...! - OTTO & DIE BEATLEJUNGS - Die Beatmusik in Deutschland 1963 - 1967, Hans-Jürgen Klitsch, Beatle Jungs. In 1976 I was living in Mülheim/R. and it was the year that I became member of "1. Deutscher Ringtausch", a club of record collectors. I was like member #87. Alfred Hebing had been a member for some time and as he lived close by (in Essen), we struck up a friendship (which lasts to the very day).

As our (then) girlfriends (now wives) would also get along fine, things ran smoothly, and soon my friend Alfred and I were offered the opportunity to make a music magazine for the club. Untitled. Deep Purple Come Taste The Band US Promo media press pack (453354) PRESS PACK. Deep purple poster gallery. Tomorrow, The Pretty Things, The Pink Fairies interview with John Alder (Twink)

The Pretty Things from left to right John TWINK Alder, Phil May & Dick Taylor PARIS 1969 performing LONELIEST PERSON from the rock opera SF SORROW on French TV. © Cameron Watson There is not many drummers as John Alder, often called just "Twink". He was part of many absolutely groundbreaking bands and met and played with so many amazing musicians.

His carrier started with Tomorrow, that recorded a psych monster LP. Later he joined forces with The Pretty Things and with them he recorded S.F.Sorrow, that is one of the pinnacle albums in the psychedelia and an early example of conceptual albums. In July 1969, John took the opportunity to record his own album with members of The Deviants (Paul Randolph), The Pretty Things (Wally Allen, John Povey), Tyrannosaurus Rex (Steve Peregrin Took) and Tomorrow (John "Junior" Wood). WHAT DO YOU KNOW ABOUT...? John "Twink" Alder - The drummer/sonic explorer details his work with the Pretty Things, Syd Barrett, and a bevy of... - Modern Drummer : MD. A key proponent of the British psychedelic rock and early punk movements, drummer John Alder, aka Twink, has performed and recorded with some of rock's most pivotal figures, including Pink Floyd cofounder Syd Barrett, counterculture iconoclast Mick Farren (the Deviants), and the Pretty Things.