Crock Pot Vegetables in the Slow Cooker - {Easy recipe} Some things in life are too good to be true. 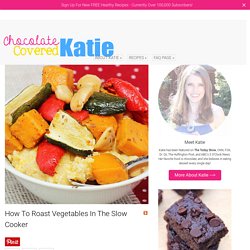 That daily email informing me I’ve won the $100 million Swiss lotto? Too good to be true. Annoying Infomercial Guy who excitedly informs you there’s a way to make money while you sleep? And if you call in the next ten minutes, he’ll reveal the secret for just $19.99? And the idea that one can make flavorful roast vegetables without turning on the oven, heating up the entire house, and watching fastidiously to ensure the crock pot vegetables don’t burn? Much too good to be true. This one is true. Slow Cooker Balsamic Chicken. Let the crockpot do all of the work in the easiest dish of all time. 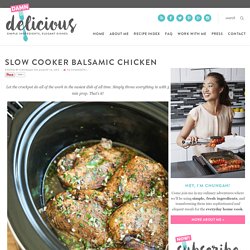 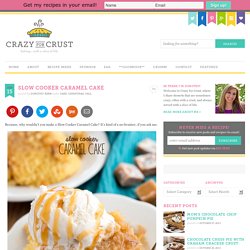 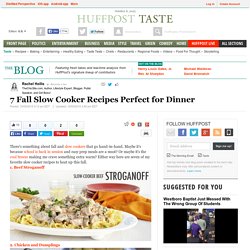 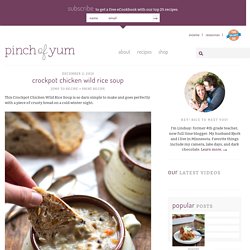 It’s not really a secret because a) I’m from Minnesota, the homeland of things like creamy delicious Wild Rice Soup, b) I’ve only posted it at least seventeen other times on the blog, and c) WILD RICE. So this time the thing that makes it special is the Crockpot. This is Chicken Wild Rice Soup meets Chicken Bacon Wild Rice Soup mashing up into Crockpot Chicken Wild Rice Soup. Crockpot Sweet Potato Chili. I hated chili as a kid, I mean we’re talking so much dislike that I would gladly go without dinner if I could. 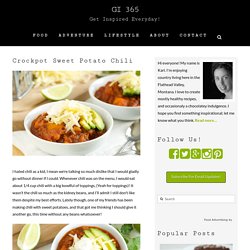 Whenever chili was on the menu, I would eat about 1/4 cup chili with a big bowlful of toppings, (Yeah for toppings)! It wasn’t the chili so much as the kidney beans, and I’ll admit I still don’t like them despite my best efforts. Lately though, one of my friends has been making chili with sweet potatoes, and that got me thinking I should give it another go, this time without any beans whatsoever! So… here we are, and I’ve just had this chili 4 DAYS IN A ROW and I’m loving it – definite success on the chili front! I’m head over heels for the way the spicy meat pairs with the sweet potato. One key to this recipe is to cut the onions into a small dice, otherwise they’ll stay crunchy. 1. 2. 3. 4. Slow Cooker Sunday: Spaghetti sauce so easy you'll never buy another jar. I'm going to let you in on my secret of what I do when I have friends coming over for dinner. 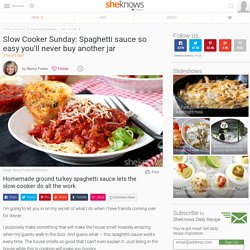 I purposely make something that will make the house smell insanely amazing when my guests walk in the door. And guess what — this spaghetti sauce works every time. The house smells so good that I can't even explain it. Just being in the house while this is cooking will make you hungry. Slow cooker marinara. I’ve made a few variations of red sauce for Budget Bytes, but this one is definitely the best of the best. 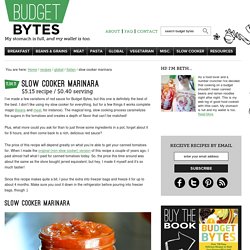 I don’t like using my slow cooker for everything, but for a few things it works complete magic (beans and meat, for instance). The magical long, slow cooking process caramelizes the sugars in the tomatoes and creates a depth of flavor that can’t be matched! Plus, what more could you ask for than to just throw some ingredients in a pot, forget about it for 8 hours, and then come back to a rich, delicious red sauce? The price of this recipe will depend greatly on what you’re able to get your canned tomatoes for. 5 Easy $5 Crockpot Recipes That Anyone Can Make. Is your food budget breaking the bank? 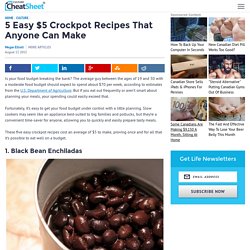 The average guy between the ages of 19 and 50 with a moderate food budget should expect to spend about $70 per week, according to estimates from the U.S. Department of Agriculture. But if you eat out frequently or aren’t smart about planning your meals, your spending could easily exceed that. Fortunately, it’s easy to get your food budget under control with a little planning. Crock Pot Breakfast Casserole. Crock Pot Breakfast Casserole is the perfect breakfast for feeding a crowd. 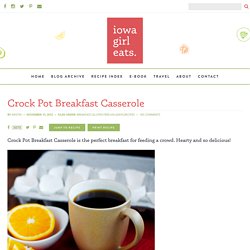 Hearty and so delicious! Can you believe Thanksgiving is just over a week away?! Usually my family and I kick the holiday off by watching the Macy’s parade with cold mimosas in one hand, and Mini Cinnamon Rolls in the other before getting into our annual showdown over playing Scrabble, followed by feasting on my Mom’s traditional Thanksgiving dinner later that afternoon. I am not mad at that! The men don’t last too long on cinnamon rolls alone though (and need something to soak up all those mimosas!) This year, however, we’ve got a more concrete game plan. Soy Balsamic Slow Cooker Chicken - Home - Kiss My Whisk. I know I have said this before, but it honestly always takes me 2 tries and a Google search to spell balsamic correctly.

Okay now that I have that off my chest we can move on. In preparation of our anniversary in a few weeks, we transported the top tier of our wedding cake from my parents freezer to our freezer this weekend. It's in a huge box, so this meant that I had to clear out a shelf of my jam packed freezer. Crock Pot Breakfast Casserole. 21 5-Ingredient Crock Pot Recipes.

Crock-Pot Recipes - Easy Slow Cooker Meals. We love a good shortcut — in life and in the kitchen. Recipes that require nothing more than tossing everything in a big bowl always get the most love from us. Pair that convenience with the possibility of coming home to a warm, fully-cooked meal? That's the stuff dreams are made of. Based on our preferences, it's not hard to deduce that the Crock-Pot is one of our favorite kitchen appliances, ever. Its versatility and simplicity (literally plug it in, flip a switch, and wait) make it our go-to all year round — not just during the colder months. Photographed by Mike Garten. Spinach Eggplant Lasagna Serves 6 Ingredients1 small to medium eggplant, peeled and thinly sliced4 cups fresh spinach, packed1/2 cup pesto1 1/2 cups shredded part-skim mozzarella cheese, divided1/4 cup grated Parmesan cheese 1 15-oz container ricotta cheese1 egg1 24-oz jar tomato and basil pasta sauce1 package precooked lasagna noodles, preferably BarillaInstructions1. 2. 3.

Add the pork and toss to coat. Cook, covered, until the pork is tender and shreds easily, 7 to 8 hours on low or 4 to 5 hours on high. Forty-five minutes before serving, in a large bowl, whisk together the sour cream, remaining 2 Tbsp vinegar, 1 Tbsp water and 1/2 tsp each salt and pepper. Core and thinly slice the cabbage, add it to the sour cream mixture and toss to coat. Switch it up: Replace the pork with a 2-lb brisket (trimmed of excess fat) and cook as directed.

6 Detox Dinners Your Crockpot Will Make for You - Part 6. The biggest food holiday of the year is over: Now, it’s time to get ready for Christmas and all the sweets and treats that come with it. Some people get stressed over the weight gain that seems inevitable over the holidays, but the trick to weight maintenance during the months of November and December is staying healthy when you can.

That’s where easy, nutritious weekday dinners come in. Eat well on the weekdays and feel better about indulging on the weekends. The easiest way to eat your best and stress less is to get friendly with your crockpot, because nothing makes delicious and nutritious weekday meals easier. Here are six detox weekday meals you can make right in your crockpot, so you aren’t inclined to eat takeout during your busy December nights.

33 3-Ingredient Slow Cooker Recipes - Totally The Bomb.com. 35 Slow Cooker Recipes for Busy (or Lazy) Vegetarians. Wise Bread Picks I like to keep things simple in the kitchen, so I'm not big on extra appliances. In fact, we got rid of our bread maker, microwave, panini press, and toaster oven — all within the last year. There is, however, one extremely useful tool that we'll be holding onto for the long haul. Oh-So-Flavorful Pork Roast - Recipes That Crock! Over 20 Ground Beef Crockpot Recipes. Slow Cooker Ham Recipe. Crock Pot Sweet Asian Chicken & Broccoli - Ally's Sweet and Savory Eats.

Crock Pot Basil Marinara Sauce - Ally's Sweet and Savory Eats. Slow-Cooker Blackberry Cordial. Hot Fudge Sundae Cake. Slow Cooker Savory Pot Roast. Slow-Cooker Chicken & Dumplings. 25 Great, Cheap, and Easy Crock Pot Recipes. Popular in Food & Drink As a busy mom, I love using my crock pot. There's nothing better than tossing a few ingredients in a cooker in the morning and having dinner ready in the evening. Here are some of my favorite recipes, plus recommendations from foodies, elegant-living experts, and busy parents.

How to Adapt Recipes to a Slow Cooker – Crock Pot Recipe. Inspired by conversations on the Food52 Hotline, we're sharing tips and tricks that make navigating all of our kitchens easier and more fun. Today: Let's all take a deep breath, relax and slow down our favorite traditional recipes. Picture this: you throw everything into a pot -- go run errands or even go to work for the day -- and return to a perfectly-cooked dish. This is the beauty of a slow cooker: no hovering over a stove necessary. 3-Ingredient Pulled Pork recipe. Slow Cooker Brown Sugar Balsamic Glazed Pork with Roasted Potatoes and Apples. Crockpot Broccoli Cheddar Soup. The EASIEST cheesiest soup ever!!!! Whenever we are at a restaurant and broccoli cheddar soup is on the menu….the WHOLE family orders it. No Time to Cook Chicken Recipe.

Slow Cooker Chicken and Dumplings Recipe. Crockpot Recipes. Freezer Friendly/Make Ahead. 50 Slow Cooker Recipes. Life is busy around my house. Even though I have young kids, we are working on potty training, sharing, walking and just staying safe :) Toddlers are such a crazy and fun age!

A Year of Slow Cooking. Stupid Easy Crock Pot Slow Cooker Sausage Potatoes Recipe - Food.com - 227127. Crock Pot Teriyaki Steak Recipe - Food.com - 40857. My Fridge Food - Recipes you already have in your Fridge. Crock Pot Chicken W Black Beans And Cream Cheese...yum! Recipe - Food.com - 89204. 77 Healthy Crock-Pot Recipes. Crazy schedules, long work hours, and tempting takeout menus make it tough to even think about cooking most nights during the week. Despite the inconvenience, firing up the stove or oven is almost always cheaper and healthier than ordering in or eating out.

How about a compromise? Making dinner with a slow cooker — Crock-Pot is the go-to brand in the U.S. — is an easy way to get in all those vitamins and minerals without slaving over a hot stove for hours at a time. Most of these recipes involve mixing up ingredients and popping them into a slow cooker for a prescribed number of hours. Save even more time by starting some of these dishes overnight or first thing in the morning and reaping the delicious, healthy benefits later in the day. Breakfast 1. Tart apples, cinnamon, brown sugar, and walnuts — what’s not to love? Ratatouille In The Crock Pot Recipe - Food.com - 52757. Crockpot Chicken Tacos.