What are the Panama Papers? A guide to the biggest leak in history. The Panama Papers are an unprecedented leak of 11.5m files from the database of the world’s fourth biggest offshore law firm, Mossack Fonseca. 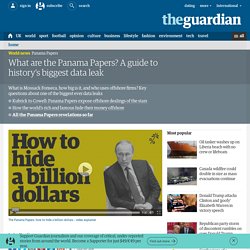 The records were obtained from an anonymous source by the German newspaper Süddeutsche Zeitung, which shared them with the International Consortium of Investigative Journalists (ICIJ). The ICIJ then shared them with a large network of international partners, including the Guardian and the BBC. What do they reveal? The documents show the myriad ways in which the rich can exploit secretive offshore tax regimes. Twelve national leaders are among 143 politicians, their families and close associates from around the world known to have been using offshore tax havens. A $2bn trail leads all the way to Vladimir Putin. An offshore investment fund run by the father of British prime minister David Cameron avoided ever having to pay tax in Britain by hiring a small army of Bahamas residents to sign its paperwork.

Content Marketing Case Study: Automating Unilever's Global Branding. Forbes Welcome. What are VPNs & why are they so important in Asia? From the news, you would think that Asian countries are on the verge of shutting themselves off from the rest of the world. 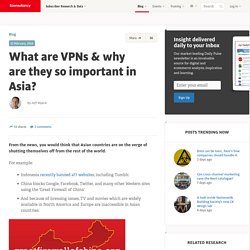 For example: Indonesia recently banned 477 websites, including Tumblr.China blocks Google, Facebook, Twitter, and many other Western sites using the 'Great Firewall of China'.And because of licensing issues, TV and movies which are widely available in North America and Europe are inaccessible in Asian countries. Gap Has Apologized for This GapKids Ad, but Did It Need To? This GapKids ad, posted to Twitter on Saturday, ignited claims of passive racism from some viewers, who objected to what they characterized as a black girl being used as an armrest by a white girl. 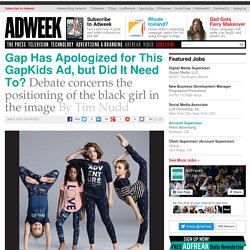 This particular tweet storm was notable also for the backlash to the blacklash, with lots of other observers saying the racism claim was a wild overreaction. These two tweets nicely sum up the opinions of both sides: Gap, meanwhile, seems to have admitted some culpability by issuing an apology to the media which reads: "As a brand with a proud 46 year history of championing diversity and inclusivity, we appreciate the conversation that has taken place and are sorry to anyone we've offended. " The brand adds: "This GapKids campaign highlights true stories of talented girls who are celebrating creative self-expression and sharing their messages of empowerment.

However, as of this writing, the image has not been removed from Twitter. Burberry becomes the first luxury brand to run a Snapchat Discover channel native ad. Android Marshmallow adoption doubles to 4.6% Android Marshmallow is finally getting some love. 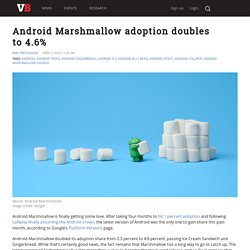 After taking four months to hit 1 percent adoption and following Lollipop finally assuming the Android crown, the latest version of Android was the only one to gain share this past month, according to Google’s Platform Versions page. Android Marshmallow doubled its adoption share from 2.3 percent to 4.6 percent, passing Ice Cream Sandwich and Gingerbread. While that’s certainly good news, the fact remains that Marshmallow has a long way to go to catch up. The latest version of Android typically takes more than a year to become the most used release, and so far it appears that Marshmallow’s story will be no different.

Here are the changes between March and April: The Platform Versions tool uses data gathered from the Google Play Store app, which requires Android 2.2 and above. Forbes Welcome. Digital in China: 10 things you might not know. Every quarter, Econsultancy delivers an update on the major internet players in China and their user experience. 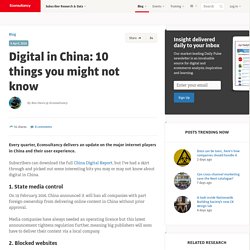 Subscribers can download the full China Digital Report, but I've had a skirt through and picked out some interesting bits you may or may not know about digital in China. 1. State media control On 19 February, 2016, China announced it will ban all companies with part foreign ownership from delivering online content in China without prior approval. Media companies have always needed an operating licence but this latest announcement tightens regulation further, meaning big publishers will soon have to deliver their content via a local company. 2. The so-called 'Great Firewall of China' blocks websites deemed a threat to state security or culture and tradition. Here are some of the sites currently blocked: 3.

Despite a population that is 46% rural (2014 World Ban figures), fully 72% of internet users are actually urban, residing in big cities. Samsung: Soak out the mess - chocolate. What is Slack, why is everybody using it, and will it destroy my work-life balance? Pepsi (PEP) Launches New Soda in Hot Category. Updated to include recent Instagram posts. 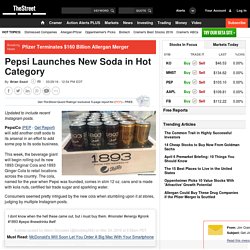 PepsiCo (PEP - Get Report) will add another craft soda to its arsenal in an effort to add some pop to its soda business. This week, the beverage giant will begin rolling out its new 1893 Original Cola and 1893 Ginger Cola to retail locations across the country. The cola, named for the year when Pepsi was founded, comes in slim 12 oz. cans and is made with kola nuts, certified fair trade sugar and sparkling water. Consumers seemed pretty intrigued by the new cola when stumbling upon it at stores, judging by multiple Instagram posts. PepsiCo is no stranger to the craft soda industry. What are the Panama Papers? A guide to the biggest leak in history.