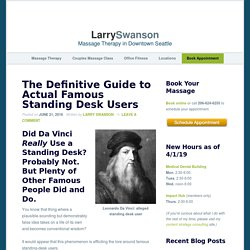 Probably Not. But Plenty of Other Famous People Did and Do. You know that thing where a plausible-sounding but demonstrably false idea takes on a life of its own and becomes conventional wisdom? It would appear that this phenomenon is afflicting the lore around famous standing-desk users. More articles and web pages than I can count have repeated a very similar list of famous historical figures who ostensibly used standing desks. These lists appear mainly in two places – 1) in news stories which appear to have relied on Wikipedia as their sole source of information on famous-stander and 2) in promotions from standing-desk vendors and manufacturers. I have verified (see below) that most of the folks on these lists actually worked standing up, but there is substantial doubt that some of the most famous alleged historical standers actually worked at a stand-up desk. 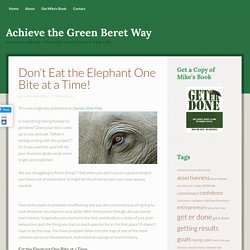 Is everything taking forever to get done? Does your boss come up to you and ask, “What is taking so long with the project?” Or if you work for yourself, do your business goals never seem to get accomplished. Are you struggling to finish things? I bet when you start out on a goal or project you have a lot of excitement. Your enthusiasm is probably overflowing and you are convinced you are going to rock whatever you have on your plate. The Core Structures. Each tower was supported by a structural core extending from its bedrock foundation to its roof. 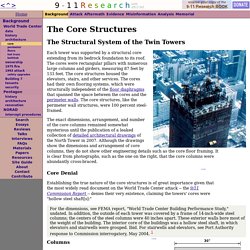 The cores were rectangular pillars with numerous large columns and girders, measuring 87 feet by 133 feet. The core structures housed the elevators, stairs, and other services. The cores had their own flooring systems, which were structurally independent of the floor diaphragms that spanned the space between the cores and the perimeter walls. The core structures, like the perimeter wall structures, were 100 percent steel-framed. The exact dimensions, arrangement, and number of the core columns remained somewhat mysterious until the publication of a leaked collection of detailed architectural drawings of the North Tower in 2007. Core Denial For the dimensions, see FEMA report, "World Trade Center Building Performance Study," undated.

Columns. Adapting Vintage Legacy Lenses For Use On New Digital Cameras. Over the last few years, there’s been a growing fashion for using older lenses on digital cameras. 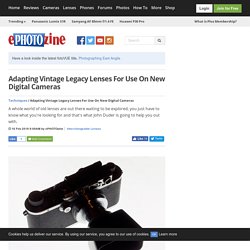 They can give a different and beautiful look – but they can also be not very good. There are several ways in which an old lens may give a nicer result than a modern one: mostly, this is due to the way that lenses have become sharper, with less tendency to vignetting and flare, while giving higher contrast. In other words, it’s the imperfections that make the older lenses interesting. There’s one other thing, though, that’s relevant; older lenses are mostly fixed focal length, which goes with wider apertures than many modern lenses. A kit zoom lens will typically be f/3.5-f/5.6, while the ‘nifty fifty’ that came on every SLR in the Seventies was f/2, f/1.8 or even f/1.4, so an older lens can give shallower depth of field than most photographers are used to, as even a ‘professional’ zoom lens only opens up to f/2.8.

How to Transfer Photos to Wood - Mod Podge Rocks. The Card Trick That Shouldn't Be Possible - Revealed. How to Win Blackjack Every Time REVEALED. Little Flower Petals. The Trick That Fooled Winston Churchill - Revealed. Private Detective 62 : Free Download, Borrow, and Streaming. (196) Private Detective 62 (1933) The 2,000-year-old 'Book Of Giants' Describes how the Nephilim were destroyed. Over 50 years ago, researchers came across one of the most important archaeological discoveries of the century when they discovered thousands of ancient scrolls. Among them, they found The Book Of Giants which speaks of the Nephilim and their destruction. One of the most important archaeological discoveries was made at the Qumran Caves over half a century ago. Among the artifacts discovered were thousands of antique scrolls that offered extremely important insight into our past. Many of these scrolls helped complete a lost fragment in Earth’s history.

But in addition to the numerous scrolls, archaeologists were surprised when they stumbled across a rare and unusual text: an ancient scroll that describes the demise of the ancient Nephilim. The Book of the Giants. Sacred Texts Christianity {From the Bulletin of the School of Oriental and African Studies, University of London, Vol. 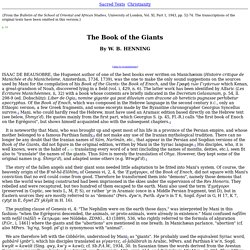