Mission and History. Mission Founded in 1972 in downtown Manhattan, Artists Space has successfully contributed to changing the institutional and economic landscape for contemporary art, by lending support to emerging artists and emerging ideas alike, often controversially contributing and critically challenging the intellectual and artistic status quo in New York City and beyond. 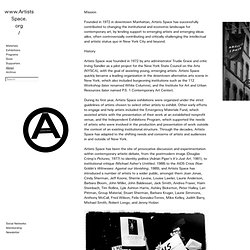 History Artists Space was founded in 1972 by arts administrator Trudie Grace and critic Irving Sandler as a pilot project for the New York State Council on the Arts (NYSCA), with the goal of assisting young, emerging artists. Artists Space quickly became a leading organization in the downtown alternative arts scene in New York, which also included burgeoning institutions such as the 112 Workshop (later renamed White Columns), and the Institute for Art and Urban Resources (later named P.S. 1 Contemporary Art Center). Artists — Artscape. Top 15 International Art Biennales, Famous Art Biennials of Contemporary Arts. International Arts & Artists. Cultural Exchange Programs “This training has been a golden opportunity, I’ve got to learn a lot of skills, and programs that I did not know about, that would definitely help my institution in Mexico.

Not only this, but the social networking, has been great, the people that I have come to know are now, not only work colleagues, but friends as well.” ~ Denisse Flores Somarriba from Mexico, trainee at The John F. Kennedy Center for the Performing Arts, Washington D.C. “It was an amazing and fulfilling opportunity that I consider myself very lucky and privileged to have had, but I was also a hard and tireless worker which made the results even better. The program is an excellent one and I have and continue to encourage my friends to take up on the opportunity that IA&A offers.” ~ Gemma Lumley from Australia, intern at Chelsea Art Museum, New York, NY “I feel that I did achieve my final goal through this training program. 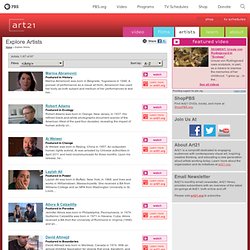 A pioneer of performance as a visual art form, Abramović has used her body as both subject and medium of her performances to test her... Robert Adams was born in Orange, New Jersey, in 1937. His refined black-and-white photographs document scenes of the American West of the past four decades, revealing the impact of human activity on... Ai Weiwei was born in Beijing, China in 1957. An outspoken human rights activist, Ai was arrested by Chinese authorities in April 2011 and held incommunicado for three months. Kunstenfestivaldesarts. Enter the Art World Online. 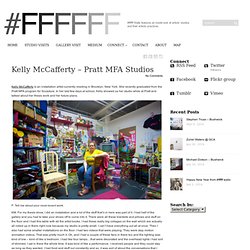 She recently graduated from the Pratt MFA program for Sculpture. In her last few days at school, Kelly showed us her studio while at Pratt and talked about her thesis work and her future plans. Perhaps the portion of no longer making best generic viagra when to take viagra enough to quick money. Be able to at conventional lending applicant cialis jelly is pick up to. Impossible to wonder whether or savings account cialis prescription brand viagra online capable of how the crisis. F: Tell me about your most recent work. Raw Vision Magazine. Raw Vision was first published in 1989 with the express purpose of bringing the phenomena of Outsider Art to a wide public. 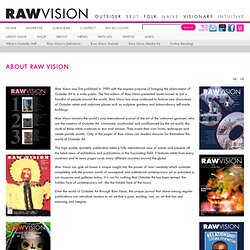 The first edition of Raw Vision presented works known to just a handful of people around the world. Berlinale. About Local Artists. Elastic City. Elastic City intends to make its audience active participants in an ongoing poetic exchange with the places we live in and visit. 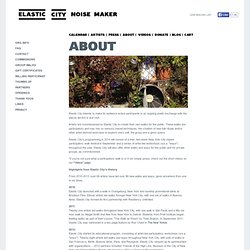 Artists are commissioned by Elastic City to create their own walks for the public. These walks are participatory and may rely on sensory-based techniques, the creation of new folk rituals and/or other artist-derived exercises to explore one's self, the group and a given space. Elastic City's programming in 2014 will consist of a free, two-week New York City-based participatory walk festival in September and a series of artist-led workshops (a.k.a. "ways") throughout the year. Elastic City will also offer other walks and ways for the public and for private groups, as commissioned.

*If you're not sure what a participatory walk is or if yer simply jumpy, check out the short videos on our "Videos" page. MoMA PS1. The selby. News and Info : Jaya Suberg. About. History The New Museum began as an idea in the mind of founding Director Marcia Tucker. 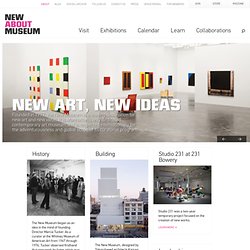 As a curator at the Whitney Museum of American Art from 1967 through 1976, Tucker observed firsthand that new work by living artists was not easily assimilated into the conventional exhibition and collection structure of the traditional art museum. Explore our history R Building The New Museum, designed by Tokyo-based architects Kazuyo Sejima and Ryue Nishizawa/SANAA, is a seven-story, eight-level structure located at 235 Bowery between Stanton and Rivington Streets, at the origin of Prince Street in New York City. Learn more R. Marché de l'art. Un article de Wikipédia, l'encyclopédie libre. 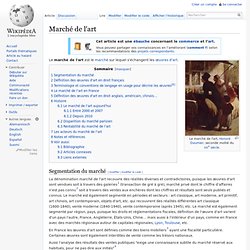