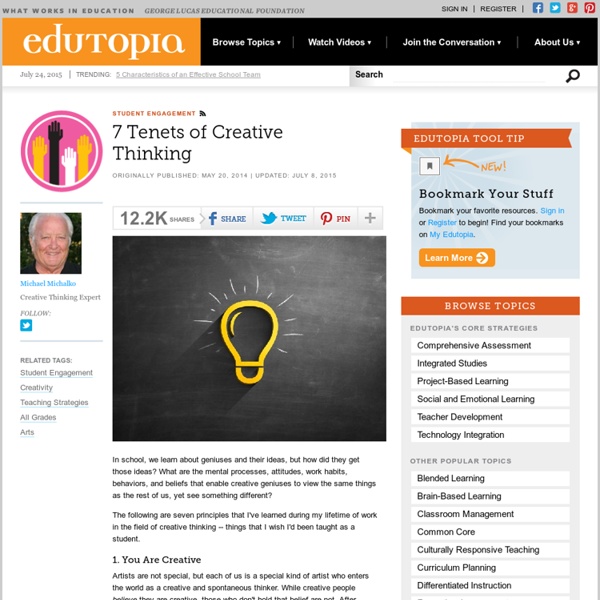 In school, we learn about geniuses and their ideas, but how did they get those ideas? What are the mental processes, attitudes, work habits, behaviors, and beliefs that enable creative geniuses to view the same things as the rest of us, yet see something different? The following are seven principles that I've learned during my lifetime of work in the field of creative thinking -- things that I wish I'd been taught as a student. 1. You Are Creative Artists are not special, but each of us is a special kind of artist who enters the world as a creative and spontaneous thinker. 2. You must show passion and the determination to immerse yourself in the process of developing new and different ideas. 3. When producing ideas, you replenish neurotransmitters linked to genes that are being turned on and off in response to challenges. 4. Your brain is a dynamic system that evolves patterns of activity, rather than simply processing them like a computer. 5. 6. 7.

Two Great Classroom Posters on The Six Thinking Hats July 17, 2014The Six Thinking Hats is a book written by Edward de Bono in which he lays out a practical method that expands on the very simple concept of thinking. Since its publication a decade ago, several teachers and educators worldwide have adopted Edward's thinking approach with success. The Six Thinking Hats can be used with students in class to enhance their thinking and decision making skills. 6 Steps to Help Students Find Order in Their Thinking Like magic, the fish turn into birds and then back into fish. M.C. Escher's tessellations have a way of grabbing your attention and forcing your mind to make sense of the impossible figures on the paper. The Merriam dictionary describes tessellations as, "a covering of an infinite geometric plane without gaps or overlaps by congruent plane figures of one type or a few types."

Yes, You Can Teach and Assess Creativity! A recent blog by Grant Wiggins affirmed what I have long believed about creativity: it is a 21st-century skill we can teach and assess. Creativity fosters deeper learning, builds confidence and creates a student ready for college and career. However, many teachers don't know how to implement the teaching and assessment of creativity in their classrooms. While we may have the tools to teach and assess content, creativity is another matter, especially if we want to be intentional about teaching it as a 21st-century skill.

The Importance Of Critical Thinking Source: www.eftbrisbane.com | Original Post Date: January 3, 2009 - Critical thinking is an incredibly important skill. We use this skill (or ought to) in every aspect of our lives every single day. Although it’s an important part of academic and business success, it’s not often taught at school unless it’s part of a math, science, or business curriculum.

Critical Thinking Pathways Critical thinking is trendy these days. With 6.3 million hits resulting from a Google search -- six times "Bloom's Taxonomy" -- its importance is undeniable. Worldwide, critical thinking (CT) is integrated into finger-painting lessons, units on Swiss immigrants, discussions of Cinderella, and the Common Core State Standards. In short, critical thinking is more beloved than Egyptian cotton. The Science (and Practice) of Creativity "Creativity isn't about music and art; it is an attitude to life, one that everybody needs," wrote the University of Winchester's Professor Guy Claxton in the lead-up to the 2014 World Innovation Summit for Education (WISE) dedicated to creativity and education. "It is a composite of habits of mind which include curiosity, skepticism, imagination, determination, craftsmanship, collaboration, and self-evaluation." Sounds like the perfect skill set for equipping young people to navigate an increasingly complex and unpredictable world. Encouragingly, there's plenty of evidence -- from both research and practice -- that most of the above can be taught in the classroom. In fact, innovation and education experts agree that creativity can fit perfectly into any learning system. But before it can be incorporated broadly in curriculum, it must first be understood.

Let's Stop Trying To Teach Students Critical Thinking Ah, but you lost the point I was making: Languages and literature give you the sound basis for understanding society and culture. But it doesn't necessarily teach critical thinking, because the available books to do reports on are often limited, and the interpretation of those book reports are done by teachers who do not use critical thought as a basis for their grading of the content. Often students, especially in elementary and middle school, are guided to the books they will report on. They are given an assignment, they are told to write X number of words, and they're graded on hitting certain points and having the appropriate grammar and spelling for their grade level. Let me put it another way: I had tested 12th grade reading comprehension in 2nd grade. Because of that I had full access to the school libraries, where other kids in my class were limited to two sections of children's entertainment books.

Using Webb's Depth of Knowledge to Increase Rigor The word "rigor" is hard to avoid today, and it provokes strong reactions from educators. Policymakers tout its importance. Publishers promote it as a feature of their materials. ELLE DECOR on Pinterest Pinterest • The world’s catalog of ideas There’s more to see on Pinterest Come take a look at what else is here! She used Pinterest to step up her style Join Pinterest to discover and save creative ideas. Building Social and Emotional Skills in Elementary Students: The Power of Perspective In this nine-part series, we will look at important factors that influence the happiness and social and emotional learning of elementary school age children. These are very useful in helping students learn, manage emotions better and increase empathy. Each blog features one letter of the acronym HAPPINESS: