Log in. Lesson 19 - Participles - present, past and future - Latin. A participle is formed from a verb but looks and behaves like an adjective. 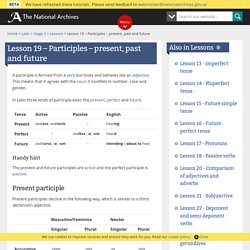 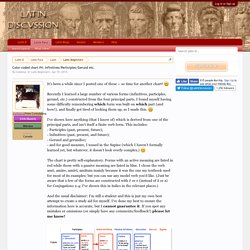 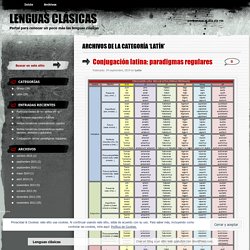 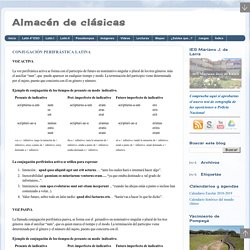 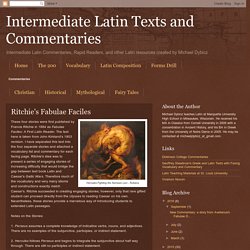 The text here is taken from John Kirkland's 1903 revision. I have separated this text into the four separate stories and attached a vocabulary list and commentary for each facing page. Ritchie's idea was to present a series of engaging stories of increasing difficulty that would bridge the gap between text book Latin and Caesar's Gallic Wars. Therefore much of the vocabulary and very many idioms and constructions exactly match Caesar's. Ritchie succeeded in creating engaging stories; however, only that rare gifted student can proceed directly from the Ulysses to reading Caesar on his own. RITCHIE'S FABULAE FACILES RITCHIE'S SIMPLE STORIES: 12 RITCHIE FABULAE FACILES TRANSLATION - HERCULES 12 - THE HATRED OF JUNO.

THIS PICTURE IS OF JUNO AND JUPPITERHercules, a Greek hero celebrated for his great strength, was pursued throughout his life by the hatred of Juno. 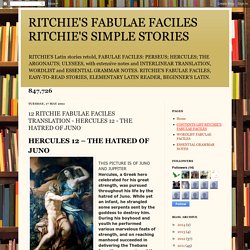 While yet an infant, he strangled some serpents sent by the goddess to destroy him. During his boyhood and youth he performed various marvelous feats of strength, and on reaching manhood succeeded in delivering the Thebans from the oppression of the Minyae. In a fit of madness sent upon him by Juno, he slew his own children; and on consulting the Delphic oracle as to how he should cleanse himself from this crime, he was ordered to submit himself for twelve years to Eurystheus, king of Tiryns, and to perform whatever tasks were appointed him. RITCHIE'S FABULAE FACILES RITCHIE'S SIMPLE STORIES: 01 FABULAE FACILES TRANSLATION, PERSEUS 01 - THE ARK - with notes and interlinear translation. PERSEUS 01PART ONE OF RITCHIE's FABULAE FACILES. 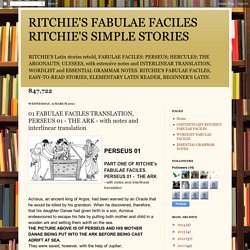 PERSEUS 01 - THE ARK - with notes and interlinear translationAcrisius, an ancient king of Argos, had been warned by an Oracle that he would be killed by his grandson. When he discovered, therefore, that his daughter Danae had given birth to a son, Acrisius endeavoured to escape his fate by putting both mother and child in a wooden ark and setting them adrift on the sea.THE PICTURE ABOVE IS OF PERSEUS AND HIS MOTHER DANAE BEING PUT INTO THE ARK BEFORE BEING CAST ADRIFT AT SEA.They were saved, however, with the help of Jupiter;and Perseus, the child, grew up at the court of Polydectes,king of Seriphos, an island in the Aegean Sea. On reachingmanhood, Perseus was sent by Polydectes to fetch the headof Medusa, one of the Gorgons. Ritchie's first steps in Latin : Ritchie, Francis : Free Download, Borrow, and Streaming. Ludus Litterarius. Julius Caesar on His Way to the Senate on the Ides of March - Abel de Pujol - The Athenaeum. FANDOM powered by Wikia. 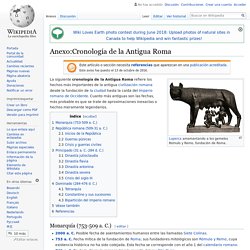 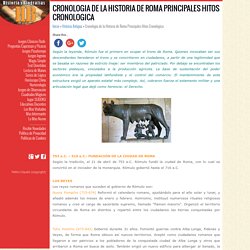 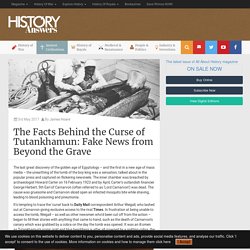 The inner chamber was breached by archaeologist Howard Carter on 16 February 1923 and by April, Carter’s outlandish financier George Herbert, 5th Earl of Carnarvon (often referred to as ‘Lord Carnarvon’) was dead. The cause was gruesome and Carnarvon sliced open an infected mosquito bite while shaving, leading to blood poisoning and pneumonia. It’s tempting to trace the ‘curse’ back to Daily Mail correspondent Arthur Weigall, who lashed out at Carnarvon giving exclusive access to the rival Times. Roman Civilization: Timeline, Facts & Contributions. Rome Timeline. To navigate the timeline, click and drag it with your mouse, or click on the timeline overview on the bottom. Legend: 753 BCE: The legendary founding date of Rome. 753 BCE - 510 BCE: Regal Period of ancient Rome from Founding to Birth of the Republic. 750 BCE - 510 BCE: The (semi-mythological) seven kings of Rome: Romulus, Numa Pompilius, Tulus Hostilius, Ancus Marcius, Lucius Tarquinius Priscus, Servius Tullius, Lucius Tarquinius Superbus.

COMMERCIUM EPISTULARUM (I) Lexicon Recentis Latinitatis, parvum verborum novatorum Léxicum. LearningApps - interactive and multimedia learning blocks. Cosmetics in Ancient Rome - Wikipedia. Cosmetae applying cosmetics to a wealthy Roman woman. Cosmetics, first used in Ancient Rome for ritual purposes,[1] were part of daily life for women, especially prostitutes and the wealthy. Some fashionable cosmetics, such as those imported from China, Germany and Gaul, were so expensive that the Lex Oppia tried to limit their use in 189 BCE.[2] These “designer brands” spawned cheap knock-offs that were sold to poorer women.[3] Working-class women could afford the cheaper varieties, but may not have had the time (or slaves) to apply the makeup[4] as the use of makeup was a time-consuming affair because cosmetics needed to be reapplied several times a day due to weather conditions and poor composition.[5] Cosmetics were applied in private, usually in a small room where men did not enter.

Scent was also an important factor of beauty. Women who smelled good were presumed to be healthy. All cosmetic ingredients were also used as medicines to treat various ailments. Skincare[edit] Rouge[edit] Nunc est loquendum! Carmenta Method for Latin Fluency. The First Key to Latin Excellence—Conversation Learning how to speak the language of the Ancients. Though learning Latin through conversation may seem like a revolutionary idea to contemporary academia, it's hardly a new thing, even if you go back only 50-100 years. In fact, in the 2,000 years of Latin-language instruction before the educational changes of the early and mid 20th century, oral and written communication in Latin was standard practice—from all the way back when it was the dominant language of the Roman Empire, throughout the Middle Ages when it was the standard language in Europe of science, philosophy, literature, and scholarship, to the early and mid 20th century when it was still the primary mode of communication of the Catholic Church.

Every educated person in this 2,000-year period not only knew Latin but knew it fluently, and they were only able to read and write it so expertly because they used it as a spoken language.