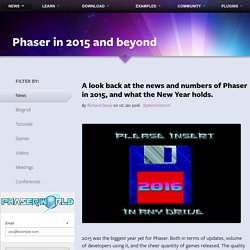 Both in terms of updates, volume of developers using it, and the sheer quantity of games released. The quality bar was raised massively too, with Phaser firmly establishing itself as one of the leading tools for web game development. So let's have a quick recap of 2015, picking out a few highlights along the way, and mix with a good dollop of what 2016 will bring. Phaser Site Traffic At the start of 2015 the Phaser web site was split into three separate sub-sites: The 'news' and downloads on the main site, the Phaser Examples and the Phaser Docs. As a result of this change, and the growing popularity of Phaser, the site traffic exploded. We will close 2015 having delivered just over 9.02 million page views to 557k users. The site runs from a dedicated server hosted in the UK.

How to create fun and interactive JavaScript games using Phaser.io. How to Learn the Phaser HTML5 Game Engine. Phaser is an open source HTML5 game framework created by Photon Storm. 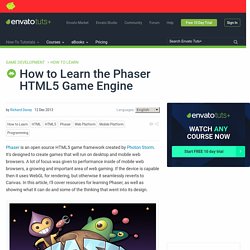 It's designed to create games that will run on desktop and mobile web browsers. A lot of focus was given to performance inside of mobile web browsers, a growing and important area of web gaming. If the device is capable then it uses WebGL for rendering, but otherwise it seamlessly reverts to Canvas. In this article, I'll cover resources for learning Phaser, as well as showing what it can do and some of the thinking that went into its design.

Roundups12 Gamedev Engines and Platforms (and the Best Ways to Learn Each of Them)Michael James Williams It's fair to say that it feels as if a new HTML5 game framework is released every week, such is the proliferation of them. Phaser - News - Game. GitHub - cstuncsik/phaser-es6-demo: This is small shoot'em up demo game to show how you can build a phaser game with the next generation of javascript (ES6/2015) Phaser - News - Using States Tutorial: Organize your game code with this tutorial. From the Perplexing Technology blog: "Developing a game using states, allows you to organize your code, while also adding a more complete and dynamic gaming experience for the player. 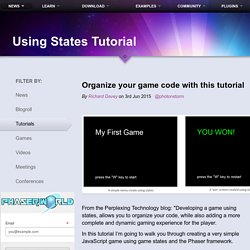 In this tutorial I’m going to walk you through creating a very simple JavaScript game using game states and the Phaser framework. Using states allows you to break your game up into smaller pieces that can handle different mechanics of the game, such as a menu. In this tutorial we’re going to create five states that will function as follows: The Boot State - We are simply going to start the physics system, and then call the Load StateThe Load State - We display a ‘loading’ text, load our assets, and call the Menu StateThe Menu State - We display the game name, get player input and call the Play StateThe Play State - This is where the game logic is actually handled. 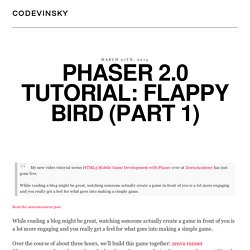 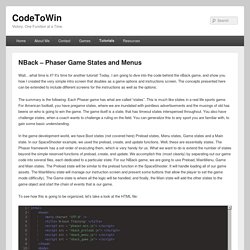 It’s time for another tutorial! Today, I am going to dive into the code behind the nBack game, and show you how I created the very simple intro screen that doubles as a game options and instructions screen. The concepts presented here can be extended to include different screens for the instructions as well as the options. The summary is the following: Each Phaser game has what are called “states”. This is much like states in a real life sports game.

In the game development world, we have Boot states (not covered here) Preload states, Menu states, Game states and a Main state. To see how this is going to be organized, let’s take a look at the HTML file: Here, we are inserting the javascript from each of our files (containing our game states) and finally calling the main state, which will invoke all the other states in the proper order. To start, let’s take a peek at the Main.js file: Let’s have a look at our nback_preload.js file: Examples - Game development. This page lists a number of impressive web technology demos for you to get inspiration from, and generally have fun with. 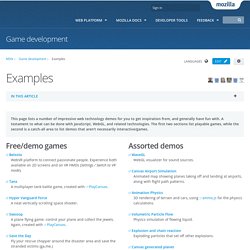 A testament to what can be done with JavaScript, WebGL, and related technologies. The first two sections list playable games, while the second is a catch-all area to list demos that aren't necessarily interactive/games. Free/demo games Beloola. Game distribution - Game development. You've followed a tutorial or two and created an HTML5 game — that's great! 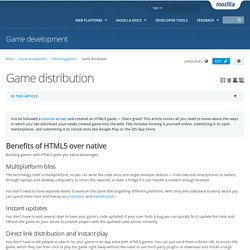 This article covers all you need to know about the ways in which you can distribute your newly created game into the wild. This includes hosting it yourself online, submitting it to open marketplaces, and submitting it to closed ones like Google Play or the iOS App Store. Benefits of HTML5 over nativeEdit Building games with HTML5 gives you extra advantages. Multiplatform bliss The technology itself is multiplatform, so you can write the code once and target multiple devices — from low-end smartphones or tablets, through laptops and desktop computers, to smart TVs, watches or even a fridge if it can handle a modern enough browser. You don't need to have separate teams to work on the same title targetting different platforms. 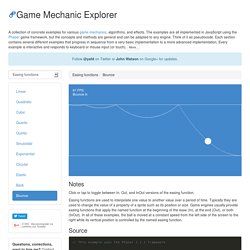 This example may not display properly because your browser doesn't fully support WebGL. Notes Click or tap to toggle between In, Out, and InOut versions of the easing function. Easing functions are used to interpolate one value to another value over a period of time. Typically they are used to change the value of a property of a sprite such as its position or size. Source. Phaser current version test environment. Get sprites under mouse or pointer. Phaser & P2 Physics: Working with Polygon Colliders. Tales - Told & Untold: Tilemaps with invisible collision layer in Phaser. While there are several TileMap tutorials for Phaser out there, I didn't find any using Phaser 2.3 with the P2 physics. 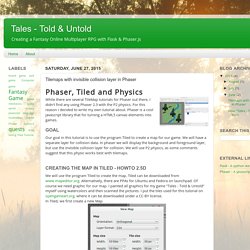 For this reason I decided to write my own tutorial about. Phaser is a cool javascript library that for turning a HTML5 canvas elements into games. Goal Our goal in this tutorial is to use the program Tiled to create a map for our game. We will have a separate layer for collision data. Creating the map in Tiled - Howto 2.5D We will use the program Tiled to create the map. Then we need to load these images by clicking Map -> New Tileset.... In the bottom right of the Tiled window, we can see the 3 tilesets. Once the background of our map is complete, we create a new Tile Layer (in the Layers window in the upper right of the Tiled window.) 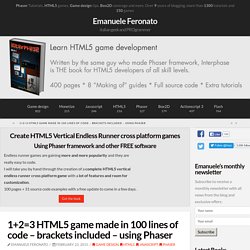 Online Code Editor The Phaser Sandbox allows you to code games in your browser without having to download or install anything. The powerful editor features Phaser code assists, JavaScript snippets and lots of the features you've come to love in editors like Sublime and Brackets. Latest Tutorials The Phaser community is great at sharing knowledge. Tutorial Easily add Scroller, ListView and SwipeCarousel UI components to your games.

A write-up on the TypeScript code that went into creating the game Rival Command. How to Learn the Phaser HTML5 Game Engine. Tutorial: Creating a game with Phaser and P2 Physics. This tutorial is a guest post from Josh Morony. Here's a quick look at what you'll be creating — click on the top black bar to move the player: How to bring your HTML5 games title screen to life in a minute with Phaser. Getting Started With Phaser: Building "Monster Wants Candy" In this extra-long tutorial, I'll break down the source for Monster Wants Candy, a multi-platform game my colleague and I built with Phaser, the HTML5 game engine. In this way, you'll gain a practical introduction to the engine, and will learn concepts you can use to build your own HTML5 mobile and browser games.

If you want to create HTML5 games, it's good to choose a framework or engine. You could, of course, do it in plain JavaScript, but using a framework greatly speeds up development, and takes care of the things that are not so exciting but that have to be done. I-open-sourced-my-phaser-html5-game. I Open Sourced My Game Building CanyonRunner was a tremendous amount of fun, thanks largely to Richard Davey's excellent Phaser framework. Along the way, I was assisted by many helpful Phaser community members and developers, so I wanted to give back by: I've written before about how I was able to build the game from start to finish in 76 days. In the course of developing it, one of the running themes I noticed on the Phaser forums was that most developers were tackling their first game and were unsure about how to implement common game features like saved games, multiple levels, different experiences for mobile and desktop, etc.

Phaser is well organized and documented, so while its various API's and systems were easy to get started with, it was less clear to many developers how to fit everything together into a coherent gaming experience. Screenshots Here's a look at some screenshots from the actual game. Intense Aerial Dogfights. Learn to Make Games. HTML5 Prototype of the Iromeku game engine made with Phaser. A couple of years ago I showed you an AS3 prototype of the Iromeku game engine. In the original game you have a game panel of a few colored squares and, using color affecting tiles, your objective is to change your panel to match that of the target.

The whole development theory and process is explained in the original post, so let’s jump straight to the point and see what you are going to do using Phaser framework in less than 50 lines of code: Dragging tiles you will change tile values, according to this rule: tile value is given by its initial value plus the sum of all tiles above it. Playing with overlaps you can get some interesting cascade sequence of numbers. Here is the script: It could be optmized above all in update function since it constantly updates tile values even when there’s no user input. Creating an html5 game like concentration - Codetuto. In this tutorial, we are going to explore various features of the phaser library by creating an html5 game like concentration. One of the advantages of using the phaser library is its cross-platform compatibility. Phaser - News - Game Design By Example: How to Make a Great 2D Platformer. Matt vs Math - embed codes for games on Publishers - affiliate marketing networks online - Softgames.

Play my latest HTML5 game: Matt Vs Math – Sponsored by Softgames. Create a HTML5 level select screen controlled by swipe – new features: adding stars and saving progress on local storage. HTML5 prototype of “Pop the Lock” iOS blockbuster using Phaser. How to develop a game with Phaser. Now is a hugely exciting time for developers creating games for internet browsers, and over the past 12 months Phaser has gone from strength to strength.

Create a wheel of fortune for your HTML5 games with Phaser in only a few lines. Playing with Phaser Tweens and Bezier curves. Learn how Phaser manages draggable objects by making the HTML5 engine behind Rush Hour game. Getting started with PhaserJS. Getting started with PhaserJS. “Trick Shot” HTML game prototype part 2 – jumping into the box. Phase-2-e. Creating Animated Scoring in an HTML5 Phaser Game. Simple way to start with Phaser. Part 2: Building a Word Search Game in HTML5 with Phaser. Phaser - News - Typewriter FX: Creates an animated typewriter effect in your games. HTML5 prototype of “Pop the Lock” iOS blockbuster using Phaser. How to create fun and interactive JavaScript games using Phaser.io.