Downloads. The package will install the full software but will at first only allow for the features that are included with the Free Edition. 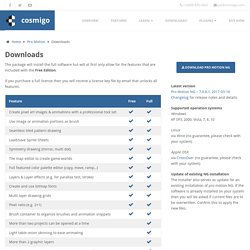 If you purchase a full license then you will receive a license key file by email that unlocks all features. Latest versionPro Motion NG – 7.0.8.1, 2017-03-18Changelog for release notes and details. Supported operation systemsWindows XP SP3, 2000, Vista, 7, 8, 10 Linux via Wine (no guarantee, please check with your system) Apple OSX via CrossOver (no guarantee, please check with your system) Update of existing NG installation The installer also serves as update for an existing installation of pro motion NG. For additional downloads please see: Remodeling RPGs for the New Millennium. Remodeling RPGs for the New Millennium By Warren Spector Despite working in a truly remarkable medium, one that provides powerful tools for the simulation of fantastic worlds and myriad ways to immerse players in them, many RPG designers these days seem content to recreate the glories of earlier computer games. 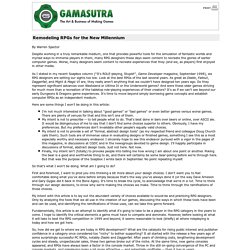 Worse, many designers seem content to recreate experiences that they (and we, as players) first enjoyed in other media. As I stated in my recent Soapbox column ("It's ROLE-playing, Stupid! ", Game Developer magazine, September 1998), we RPG designers are setting our sights too low. Why 'bad' items in games need to exist. Did you wear the Colovian Fur Helm? 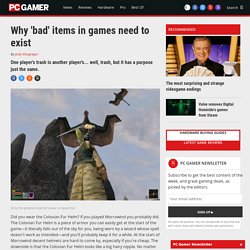 If you played Morrowind you probably did. The Colovian Fur Helm is a piece of armor you can easily get at the start of the game—it literally falls out of the sky for you, being worn by a wizard whose spell doesn't work as intended—and you'll probably keep it for a while. How to keep playing PC games in the post-apocalypse. There’s certainly no shortage of games that take place during the post-apocalypse, but what if I want to play those games during an actual post-apocalypse? 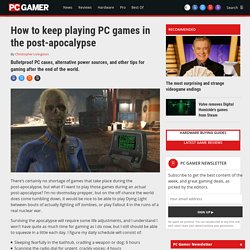 I’m no doomsday prepper, but on the off chance the world does come tumbling down, it would be nice to be able to play Dying Light between bouts of actually fighting off zombies, or play Fallout 4 in the ruins of a real nuclear war. Book Just Published! Understanding Video Game Music by Tim Summers - Ludomusicology. New monograph book on video game music released from Cambridge University Press. 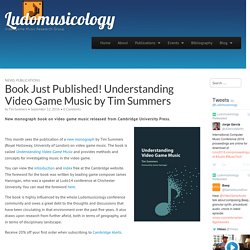 This month sees the publication of a new monograph by Tim Summers (Royal Holloway, University of London) on video game music. The book is called Understanding Video Game Music and provides methods and concepts for investigating music in the video game. Can games exist without players? / Offworld. This week, our partnership with Critical Distance brings us interviews with the developers behind Cibele and Uriel's Chasm, as well as a meditation on games that aren't meant to be played. 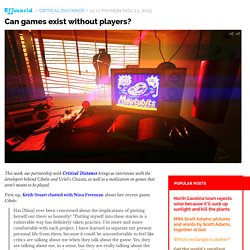 First up, Keith Stuart chatted with Nina Freeman about her recent game Cibele: Has [Nina] ever been concerned about the implications of putting herself out there so honestly? “Putting myself into these stories in a vulnerable way has definitely taken practice. Help a blind girl find her cat in a world where you see without eyes / Offworld. I watched the Bob Ross marathon on Twitch recently, where a whole new generation got to discover the magic that emerges from his brushes: how you can turn away for a moment and turn back to find a whole new world materializing across a blank canvas. 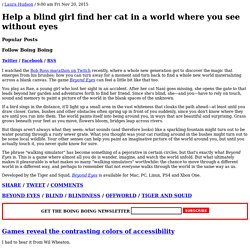 The game Beyond Eyes can feel a little bit like that too. You play as Rae, a young girl who lost her sight in an accident. After her cat Nani goes missing, she opens the gate to that leads beyond her garden and adventures forth to find her friend. Since she's blind, she—and you—have to rely on touch, sound and memory to paint a picture of the world in the blank spaces of the unknown. If a bird sings in the distance, it'll light up a small area in the vast whiteness that cloaks the path ahead—at least until you draw closer. Grow plants to support your country in this wartime gardening game / Offworld. Gardening games tend to be soothing cycles of repetition: You plant, you water, you harvest, and then you do it again. 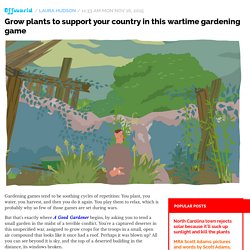 You play them to relax, which is probably why so few of those games are set during wars. But that's exactly where A Good Gardener begins, by asking you to tend a small garden in the midst of a terrible conflict. You're a captured deserter in this unspecified war, assigned to grow crops for the troops in a small, open air compound that looks like it once had a roof.

Perhaps it was blown up? Carl Sagan wrote a design doc for a video game based on his work. "The question is how to design a home video game which would teach a great deal of astronomy in a context as exciting as most violent video games. 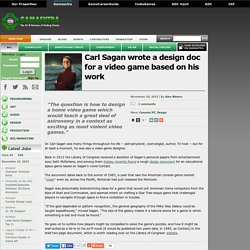 " Dr. Carl Sagan was many things throughout his life -- astrophysicist, cosmologist, author, TV host -- but for at least a moment, he was also a video game designer. Back in 2012 the Library of Congress received a donation of Sagan's personal papers from entertainment exec Seth McFarlane, and among them Kotaku recently found a rough design document for an educational space game based on Sagan's novel Contact.

The document dates back to the sumer of 1983, a year that saw the American console game market "crash" even as, across the Pacific, Nintendo had just released the Famicom. Memory of a Broken Dimension by xra. The emulator of obscure research software is spreading across the internet, origin unknown. 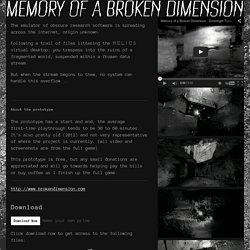 Following a trail of files littering the ＲＥＬＩＣＳ virtual desktop; you trespass into the ruins of a fragmented world, suspended within a frozen data stream. But when the stream begins to thaw, no system can handle this overflow... About the prototype The prototype has a start and end, the average first-time playthrough tends to be 30 to 60 minutes. It's also pretty old (2012) and not very representative of where the project is currently. This prototype is free, but any small donations are appreciated and will go towards helping pay the bills or buy coffee as I finish up the full game. Click download now to get access to the following files: MOBDprototypeWINv2.zip 22 MB. The first great works of digital literature are already being written. It’s an unfortunate feature of working as both a novelist and a games designer that I end up sitting through a lot of panels, round-tables, conferences, discussions and other exercises in head-nodding where digital people try to get to grips with storytelling, or where story people try to understand the digital world.

Both these types of event have their aggravations. When digital people run workshops or colloquia or jams (there are infinite names for the basic principle of bringing people together in combination with coffee) about storytelling, they often seem not to notice that quite a lot of very clever people have been thinking very hard about stories for, oh, the past 3,000-4,000 years. A brief history of yarn in video games. Legendary film critic Roger Ebert once wrote that he would rather take up knitting than review video games—as though the two were mutually exclusive. Lately, it seems like that couldn't be further from the truth. At E3 this week, Electronic Arts unveiled a lovely game called Unravel, where you play as a tiny yarn character that slowly unravels as it moves through the level.

Although that sounds a little like a metaphor for the slow but inexorable march that we are all taking towards death, in Unravel this thread is a versatile tool you can be use as a climbing rope, grappling hook, trampoline, fishing line, and whatever else the game can imagine. How four keys can create a spectrum of feelings. We often call games 'interactive entertainment,' but like any other medium, there's so much more interactivity can provide than just fun. Arielle Grimes' What Now? Is a small but complex thought space about processing anxiety, and about how we care for ourselves and others. The game (which Grimes warns may be triggering for players with sensitivity to themes of anxiety and depression, as well as to visual overwhelm or loud noise) is set in a single room with a narrow frame of view.

You only need the arrow keys to play, but a surprisingly complicated and resonant experience emerges from the combination of these simple things. As Grimes often creates personal works on themes of mental health, life experience and queerness, you can assume you're playing as her, or some version of her, tasked with exploring her space. Remembering “Amnesia,” Tom Disch’s Interactive Novel.

The cover of Amnesia. Tom Disch, who would’ve been seventy-four today, is best known for his science fiction and his poems, some of which were first published in The Paris Review. The Interactive Fiction Database - IF and Text Adventures. Minecraft player creates word processor out of redstone. Once, in Minecraft, I built a house. It was a good house, on a cliff. Over time, I added a farm, a mine and, far underground, my own personal gateway to a nightmarish hell dimension.

It was nice. Sex in Games: Rez+Vibrator - gamegirladvance. Soon after we got our Japanese Playstation2 in beautiful Ocean Blue, we went shopping for games. In the electronic wonderland of Akihabara we came across the game Rez. "Have you ever played it? " Justin asked me. Software Library: MS-DOS Games : Free Software : Download & Streaming. How To Get The Sharpest Images Possible Out Of Your Old Consoles. Pathologic. Neuromancer AMIGA OCS 1989)(Interplay)[cr Nosferatu] adf. Dopewars-1.5.12. Myst Online: Uru Live - Play. Home of the Underdogs. The 6 Craziest Ways Creators Hid Themselves in Video Games.

#3. MDK2 -- The Developers Are Hiding in the Stars, Literally (Also They're Insane) Via Bluesnews.com. Microcomputer Software Lives Again, This Time in Your Browser. The miracle is now so commonplace that it’s invisible: we have the ability to watch video, listen to music, and read documents right in our browsers. The Entertainment. RogueSynapse. The Making Of Grim Fandango. RPG inside an Excel workbook. For Our Consideration. Leisure Suit Larry in the Land of the Lounge Lizards Walkthrough. How much game can you fit in 32x32 pixels? Category:Games with hidden developer messages - The Cutting Room Floor. Message in a Binary Bottle. Pirate 777. Dystopia. Historia de la Tecnología: Gun Fight. تحت الرماد أول لعبة عربية ثلاثية الأبعاد مكرسة لقضيتنا الفلسطينية من دار الفكر. The Classic Dungeon Adventure Game. A free, open-source game of ancient warfare. The Linux Game Tome.