RC Modell-Fallschirmspringen. Hout dat geen hout is – Trendy Tuinen. Balancing 130X rotors using spectral analysis. A helicopter as small as a 130X can simply be taped to the top of a table. 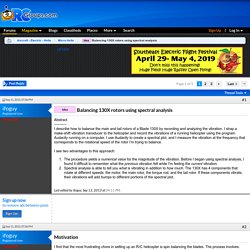 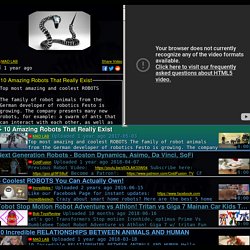 Nice things. Alles over elektrische boiler. Three Ways To Read A PWM Signal With Arduino. PWM (Pulse-Width Modulation) is a modulation technique that controls the width of the pulse based on modulator signal information. 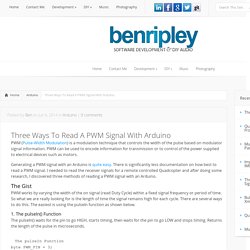 PWM can be used to encode information for transmission or to control of the power supplied to electrical devices such as motors. Generating a PWM signal with an Arduino is quite easy. There is significantly less documentation on how best to read a PWM signal. I needed to read the receiver signals for a remote controlled Quadcopter and after doing some research, I discovered three methods of reading a PWM signal with an Arduino. The Gist PWM works by varying the width of the on signal (read Duty Cycle) within a fixed signal frequency or period of time. Arduino Timer Interrupts: 6 Steps. AdWords We use AdWords to deploy digital advertising on sites supported by AdWords. 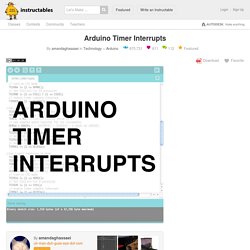 Ads are based on both AdWords data and behavioral data that we collect while you’re on our sites. The data we collect may include pages you’ve visited, trials you’ve initiated, videos you’ve played, purchases you’ve made, and your IP address or device ID. ProAV / data and information, lists, tables and links.

PPMReader/README.md at master · DzikuVx/PPMReader. ServoTimer2 - drives up to 8 servos. /* ServoTimer2.h - Interrupt driven Servo library for Arduino using /* This library uses Timer2 to drive up to 8 servos using interrupts so no refresh activity is required from within the sketch. 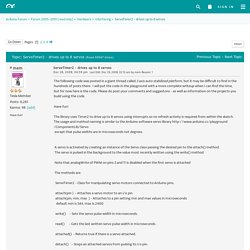 The usage and method naming is similar to the Arduino software servo library except that pulse widths are in microseconds. A servo is activated by creating an instance of the Servo class passing the desired pin to the attach() method. The servo is pulsed in the background to the value most recently written using the write() method. ArduinoLibraries/Maga6ChanelsA8_A13.ino at master · jantje/ArduinoLibraries. RCArduino: How To Read Multiple RC Channels. This post builds on previous posts to show a technique for reading multiple radio control receiver channels using an Arduino. 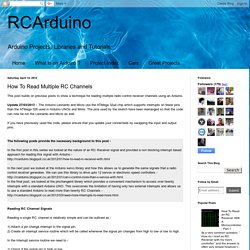 Update 27/03/2013 - The Arduino Leonardo and Micro use the ATMega 32u4 chip which supports interrupts on fewer pins than the ATMega 328 used in Arduino UNOs and Minis. The pins used by the sketch have been rearranged so that the code can now be run the Leonardo and Micro as well. If you have previously used the code, please ensure that you update your connecteds by swapping the input and output pins. The following posts provide the necessary background to this post - ATtiny Basics. The ATtiny boards are a great little chips. 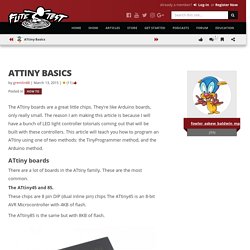 They're like Arduino boards, only really small. The reason I am making this article is because I will have a bunch of LED light controller totorials coming out that will be built with these controllers. This article will teach you how to program an ATtiny using one of two methods: the TinyProgrammer method, and the Arduino method. Gammon Forum : Electronics : Microprocessors : Interrupts. This article discusses interrupts on the Arduino Uno (Atmega328) and similar processors, using the Arduino IDE. 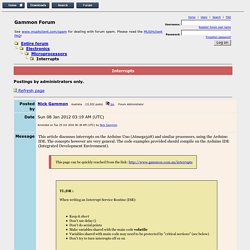 The concepts however are very general. The code examples provided should compile on the Arduino IDE (Integrated Development Environment). Vliegtuig Modelbouw Club Rheden. Reading PWM Signals From An RC Receiver With Arduino - CamelSoftware. So you want to create a remote controlled device using an Arduino? 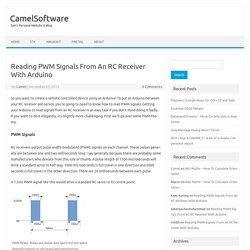 To put an Arduino between your RC receiver and servos, you’re going to need to know how to read PWM signals. Getting your Arduino to read signals from an RC receiver is an easy task if you don’t mind doing it badly. Fork Robotics - Part 4. I’ve been in this situation many times: I just finished an Arduino project, I’m happy with it and would love to save it, but I only have 2 Arduino boards. 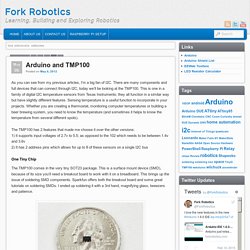 Do I sacrifice one to keep this project intact or pull everything off the breadboard and move on? For all the Arduino enthusiasts that can relate to this, thankfully that’s not the only 2 choices. In my last post I mentioned the Arduino-Tiny project that allows you to use ATtiny chips as an alternative to a full Arduino in projects. My Research - Servo modifications. Increase of the angle of deviation of the servo-mechanism up to 180 degrees The common servo-mechanisms secure the angle of deviation of the swing for 120 degrees (+-60) and even less than that. 4-Axis CNC Hot-wire Foam Cutter (Arduino+Ramps1.4): 9 Steps. Grbl Hotwire controller We are using a Grbl control panel developed by Garret Visser which was adapted for Hotwire cutting by Daniel Rascio.

The panel has Independent jogging control for all axis including homing. There is also a Gcode graph visualization tool, and the ability to save your own macros. Dronisos - showreel. New record! 1,374 drones dance over ancient city wall of Xi'an. The Biggest Drone Show in China! Watch This Breathtaking Drone Airshow in South China's Guangzhou. 1,000 drones glittering in sky for Chinese lantern festival set Guinness record. 1479932728445 v0ch3x. Part 7 - Mini SCARA CNC Plotter - Checking the resolution (not good).

Plot clock. Gforce-RC Planes: HD Foam Cutting and shaping. Choosing the Right Foam - What type of foam should we use for our models? We can use cores/sheets from several types of foams and densities, and if you are new to using foam construction, foam selection can be confusing. The Basics. Foam wings became popular in the 1960's when modelers quickly found out that the job of building a tapered wing a lot easier.The first type of foam wings were constructed of EPS foam that was covered with 1/16" Balsa sheeting applied with Epoxy glue or contact adhesive. This type of construction was popular for .40 and .60 sized glow engine R/C aircraft which ruled the sky of most R/C fields at the time.The finish was typically Mono Cote or one of many heat shrink covering materials. Not surprisingly, this type of foam wing construction works well for many types of aircraft and is still very popular today. Wing strength. Foam type relates to overall wing strength, but not necessarily the way you might think.

Thin wings. Jedicut - Logiciel pour la découpe au fil chaud CNC. Omgevingsloket - Publiek loket. RRRC Project - PIPER CUB. 5/ Creasing and folding are next. Using the plastic pizza cutter and the 1m steel rule, I creased the 2 fold lines to the tail. These fold lines should end one flute either side of the centre flute. [Note in the picture below I didn't get it perfect, probably due to running the cutter down the same side of the ruler for both creases.

It would have been more accurate to have turned it around and creased with the rule towards the middle for both.] Holding the steel rule near the crease, fold each one to 90 degrees. AMA Flight School. By John Anderson Project 3X5 is a unique approach to educational aerodynamics-using simple 3"X5" index cards to create interesting, good flying paper gliders. Even very young student(s) can quickly explore a variety of basic principles including: shape and proportion, angles and balance, and stability and control-at a very low cost, in almost no time, with minimal effort. The hands-on learning is fun, and results in make-and-take projects which can be decorated as desired, thus a complete STEM experience. Vijay Kumar: The future of flying robots. Unofficial Guide to Hacking RICOH THETA S API. I am using the Python requests library for HTTP requests. *** MICROKITES *** Digitale RGB Ledstrip WS2812B - 60 LED - 1M. Tweaking4All.nl - Arduino - WS2812 LED strip besturen met NeoPixel of FastLED.

GimBall Bounces off Trees and Comes Back for More. Robust Flight in Cluttered Indoor Environments. Robots capable of flight in cramped and cluttered environments have many advantages over their ground-based counterparts, but most current systems suffer from the same fundamental problem: any contact with obstacles have catastrophic, mission-ending results. What if instead of avoiding collisions, a flying robot became robust to them, and could even take advantage of contact with its environment? GimBall and the AirBurr, are robots designed specifically to study the physical interaction between flying robots and their environment.