Sean Gallagher - Desertification in China. In China, nearly 20% of land area is desert. 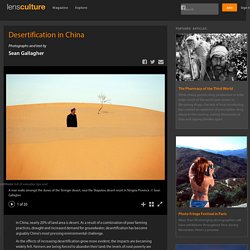 As a result of a combination of poor farming practices, drought and increased demand for groundwater, desertification has become arguably China's most pressing environmental challenge. As the effects of increasing desertification grow more evident, the impacts are becoming widely felt. Farmers are being forced to abandon their land; the levels of rural poverty are rising; the intensity of sandstorms, which batter northern and western China each year, is growing ever more extreme.

Eric Gottesman - Sudden Flowers. We make pictures based on our dreams, our future and our past. 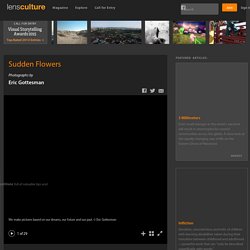 The subject of Eric Gottesman's book, Sudden Flowers, is a group of children, all of whom are orphans of AIDS. The gang, originally composed of six members, was living in a crowded house in a neighborhood in the capital of Ethiopia when Gottesman was introduced to them. Beginning from this difficult and unlikely relationship, Gottesman decided that this photo project was going to be different. Rather than producing the usual documentary work, white man pointing camera at non-white person(s), Gottesman spent 15 years with his "subjects"—"subjects" who over time would become not just close collaborators, but even like a second family.

Nancy Lee - Global Village. Nancy Lee was born in Hong Kong but has lived around the world. 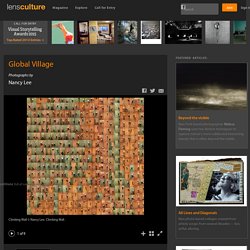 From the age of 5, she began playing piano, instilling in her a love of music. Today, she expresses herself through movement (swimming & martial arts) and photography. Olivier Ramonteu - Alter Ego. "Alter ego" was for a long time in gestation in the hollow of my shady dreams. 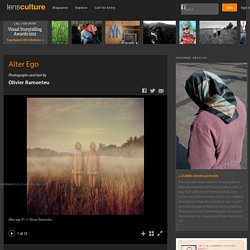 For several years, I had investigated the theme of the double in literature (its ythological origins as well as its more recent expressions). For example, The Double by Dostoyevsky, William Wilson by Edgard Poe or Narcissus and Goldmund by Hermann Hesse were for me sources of delight—and objects of study. That is why the beings which I represent here, in these photographs, seem at the same time so fascinating and so disturbing. They seem to float, vaporous, in a universe soaked with an atmosphere of fantasy and strangeness. We feel them so close. Peter Dench - Drinking of England. On January 15th 1915, during the First World War, the Chancellor of the Exchequer, David Lloyd George exclaimed that Britain was “fighting Germans, Austrians and Drink, and as far as I can see the greatest of these foes is Drink.” 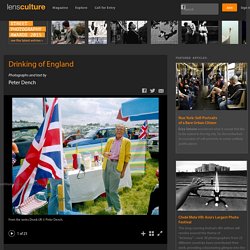 The Germans and Austrians may have been repelled, twice, but nearly a century on the battle of the booze continues. The English have turned drinking into a national obsession, nearly an art form. Ian Hughes - People of England: 30 Years of Street Photography. Michael Wolf - Hong Kong Trilogy. German photographer Michael Wolf has a brilliant eye for quirky details which he delightfully (and obsessively) catalogs into subsets, and then groups them together as unlikely typologies of ephemeral urban phenomena. 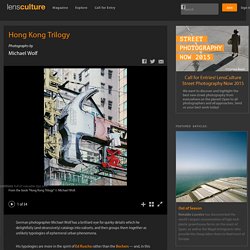 His typologies are more in the spirit of Ed Ruscha rather than the Bechers — and, in this case, they’re oddball urban scenes he has encountered in Hong Kong over the past 20 years. Gathered together in his wonderful gem of a book, Hong Kong Trilogy, we have: After spending time with this book, it’s impossible not to notice similar quirky patterns in your own neighborhood — but it’s not so easy to frame this flotsam as artfully as Wolf does. Joel Meyerowitz - Video: Joel Meyerowitz on Visual Storytelling. Laia Abril - Tediousphilia. Thousands of young couples from every corner of the planet are setting up businesses, simply and quickly, from the comfort of their own bedrooms. 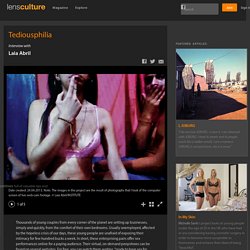 Usually unemployed, affected by the hopeless crisis of our days, these young people are unafraid of exposing their intimacy for few hundred bucks a week. In short, these enterprising pairs offer sex performances online for a paying audience. Their virtual, on-demand peepshows can be found on several websites. For free, you can watch them waiting, "ready to have sex for you"—they will remain on camera until the moment you decide to pay for action. Xavier Comas - Tokyo Up, Down. As urban environments are increasingly dependent on the efficient use of space, high-rise structures have become the solution to overpopulation issues. 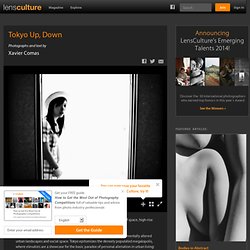 Elevators enabled the development of many-storied buildings and fundamentally altered urban landscapes and social space. Tokyo epitomizes the densely populated megalopolis, where elevators are a showcase for the basic paradox of personal alienation in urban living: the inescapable physical proximity countered by emotional distance. Viviane Sassen - In and Out of Fashion. In the Netherlands and abroad, Viviane Sassen is known foremost as an artist, whose somewhat surreal, colourful photographs of Africa won her the Prix de Rome in 2007. 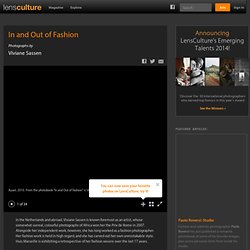 Alongside her independent work, however, she has long worked as a fashion photographer. Her fashion work is held in high regard, and she has carved out her own unmistakable style. Huis Marseille is exhibiting a retrospective of her fashion oeuvre over the last 17 years. The retrospective shows images built up like paintings or collages, and which arise in free association and creativity. Charles Schwartz - New York Camera Obscura.

The ephemeral projections of a camera obscura have fascinated artists since the 15th century. 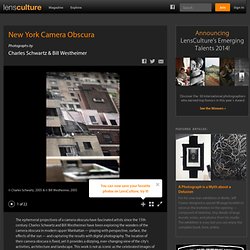 Charles Schwartz and Bill Westheimer have been exploring the wonders of the camera obscura in modern upper Manhattan — playing with perspective, surface, the effects of the sun — and capturing the results with digital photography. Jeff Vanderpool - Trans Siberian Flipbook. In the summer of 2006 I traveled by train from Moscow to Beijing. As mile after mile passed, I thought about how difficult it is to get behind the fleeting glimpses of landscapes and people. We can stop our journey, to explore and even live somewhere in order to get to know it better. Emma Livingston - Urban Tree Portraits. I began this series of Tree Portraits in January 2008. This particular selection of trees is taken in one area (barrio) of Buenos Aires. It is an ongoing project which I am extending into other parts of Buenos Aires, and which I then intend to take to other cities in Argentina and beyond. I treat each tree as an individual, centering them in the composition as I would a person.

The tree is the protagonist. Alejandro Almaraz - Portraits of Power. Throughout history, portraits have played an essential role in how different cultures depict and view people of high social relevance. Kings, emperors and politically powerful families were the common possessors of that privilege. This historical tradition throughout different cultures that relates portrait with power continues until today, especially among the photographic portraits of the leaders of modern states. Portraits of heads of state are often used as a symbol of the State power. In most countries it is part of common protocol to find the head of state portrait in important government buildings. We could say this practice embodies one of the few moments in history in which power chooses carefully the way to represent itself. My work attempts to create a space for reflection on this relationship.

Marjorie Salvaterra - HER. I am a decent woman. A pretty good wife—with a great therapist, otherwise I would’ve screwed this one up way too many times. A mother—I think this one I do best except between the hours of 6:15 and 7:30pm and certain whole days at a time. Meeri Koutaniemi - Taken. A child's hand held a flashlight. It was the only source of light in the dark mud hut. The child shined the light on her, revealing that she lay naked and bound on the floor. The light beam hit in between the girl's bare thighs. Women gathered in the cowshed. Animal leather was applied to the floor and Nasirian came to lie down on top of it. It all happened quickly. National Geographic - Photographers on Photography. Ed Van Der Elsken - Love on the Left Bank. Jorge De La Torriente - From Above. All these images were taken from a helicopter over Miami Beach, Florida.