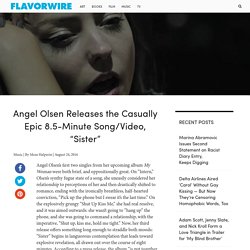 On “Intern,” Olsen’s synthy fugue state of a song, she uneasily considered her relationship to perceptions of her and then drastically shifted to romance, ending with the ironically breathless, half-hearted conviction, “Pick up the phone but I swear it’s the last time.” On the explosively grungy “Shut Up Kiss Me,” she had real resolve, and it was aimed outwards: she wasn’t going to “hang up” the phone, and she was going to command a relationship, with the imperative, “Shut up, kiss me, hold me tight.” Now, her third release offers something long enough to straddle both moods: “Sister” begins in languorous contemplation that leads toward explosive revelation, all drawn out over the course of eight minutes. The music video that accompanies — the third self-directed video from the LP, though this one was co-directed with Conor Hagen — is fitting, if un-distractingly pleasant. Songs We Love: Maren Morris, 'Once'

What makes a torch song a true showstopper? 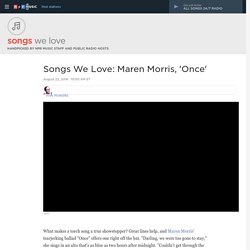 The Chemical Brothers - Wide Open (feat. Beck) Lord Huron - The World Ender (Official) Sturgill Simpson Sings A Surreal Lullaby In 'Breakers Roar' Screening Room: “Boogaloo and Graham” “Boogaloo and Graham,” by the Northern Irish director Michael Lennox, is a delightful and funny short film that contains, as a kind of hidden surprise, a meditation on fear. 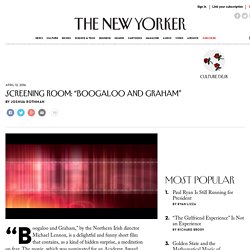 The movie, which was nominated for an Academy Award this year, follows a family—two boys (Riley Hamilton and Aaron Lynch) and their father and mother (Martin McCann and Charlene McKenna)—during a few months in Belfast during the Troubles. It’s the summer of 1978. Outside the family’s apartment, armed patrols prowl the streets. Inside, the father unboxes his sons’ new pets: two baby chicks, whom the boys name Boogaloo and Graham. Often, Lennox shows us the world through the parents’ eyes: the drab apartment, the mounting Troubles, the absolute vulnerability of their young children.

It’s not often that a student film gets nominated for an Oscar, but such was the case with Head Over Heels, the graduate film of animator Timothy Reckart that went on to pickup awards and nominations around the world when it was released in two years ago. 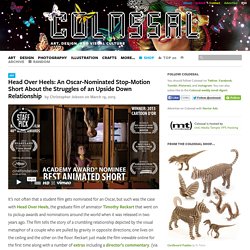 The film tells the story of a crumbling relationship depicted by the visual metaphor of a couple who are pulled by gravity in opposite directions; one lives on the ceiling and the other on the floor. “How to Become Gluten Intolerant” from the “How to Be Ultra Spiritual” dude. “Being gluten intolerant means you are entitled to tell people about the offensive things that happen to you if you eat gluten. 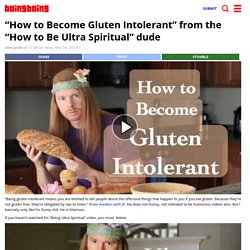 Meghan Trainor - Dear Future Husband. Special VI Morphing :-) Learn to make hot wet rice with a $2,000 gadget on the funniest cooking show ever. If you’ve been longing for a cooking show with smart writing, attractive hosts and a ton of sexual innuendo, look no further than The Katering Show, where Aussies Kate McLennan and Kate McCartney smile for the camera while comparing too-expensive German multi-mixers to gangbangs. 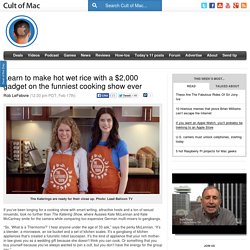 Verbatim: What Is a Photocopier? - Video. AMAZING & FUNNY HANDS DANCE ( We No Speak Americano) The Best 71-Second Animation You'll Watch Today. See the New York City Ballet's Remarkable Film That Quietly and Beautifully Honors 9/11. Most of the brand talk around 9/11 this year was about marketers doing it wrong. 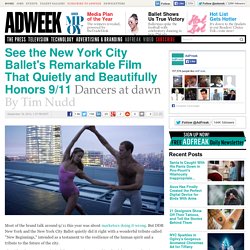 But DDB New York and the New York City Ballet quietly did it right with a wonderful tribute called "New Beginnings," intended as a testament to the resilience of the human spirit and a tribute to the future of the city. The video shows NYCB principal dancers Maria Kowroski and Ask la Cour performing on the 57th-floor terrace of Four World Trade Center in lower Manhattan. Ornate Painted Dragons Based on a Single Giant Brush Stroke.

One of the most common feelings I get when watching an artist working is “oh, that looks easy.” 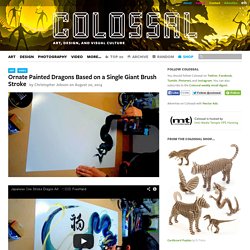 After all, the materials and method are all right in front of you: paint or ink, a paint brush or pen, and a hand that moves deftly across a canvas. A Man Said She Was Too Old To Be Seen With Him In Public. Well, She’s Going Real Public Now. Jeff Goldblum Is Out of His Mind in Tim & Eric's Loony Ad for GE Lighting. GE has been doing a lot of poignant ads through BBDO New York lately—the dreamy fantasy world of "Childlike Imagination" (an Emmy nominee this year); the haunting dystopia of "Ideas Are Scary"; the adorably odd science fiction of "The Boy Who Beeps. 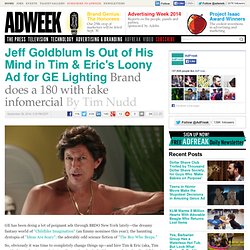 " So, obviously it was time to completely change things up—and hire Tim & Eric (aka, Tim Heidecker and Eric Wareheim) to direct a barely clothed but great-haired Jeff Goldblum in this totally bonkers fake infomercial for the GE Link lighting solutions. It's kind of all over the map, but the two-minute spot has lots of enjoyable over-the-top moments—particularly the peppy transitions from super-suave Goldblum to the "unremarkable nobodies" who deliver the testimonials.

A fake infomercial isn't the route you'd typically choose for explaining new technology like GE Link. But this seems to be more of an awareness play. Dollar Shave Club Trolled by Thousand Dollar Shave Society, for Guys Who 'Make Babies on Purpose' There's a certain type of gentleman who can't be bothered with clubs. 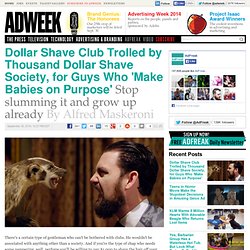 He wouldn't be associated with anything other than a society. And if you're the type of chap who needs some pampering, well, perhaps you'll be willing to pay $1,000 to shave the hair off your face. The Thousand Dollar Shave Society (a blatant troll on the Dollar Shave Club) is aimed at a different class of male who enjoys the finer things in life, like shaving utensils made of animal parts. 3D bird sound visualization is electrifying. Sometimes the sound of chirping and singing birds can be enough to inspire a feeling of peace and tranquility. But for Australian multimedia artist Andy Thomas — who specializes in creating “audio life forms” — such dulcet tones inspired something more: curiosity about what they might look like as sound-driven 3D animations.

The result: Nightingale & Canary, a bird sound animation video that you need know nothing whatsoever about to enjoy. Just ask my cats. This crazy gorgeous piece, commissioned by Europeana Creative and funded by the EU, uses recorded bird sounds from the archives of the Netherlands Institute for Sound and Vision. Alongside photographs of various flora and fauna, sketches, and even paintings, the artist uses a variety of 3D visualization software to achieve dramatic and enchanting motion graphics. This synthesis creates the animation in concert with the music for a visually arresting result.

Allow yourself to be mesmerized by this gorgeous footage of the Portuguese man-of-war. So, You're Telling Me You Don't Like The Way You Think I Have Sex? 'Cause That's All I'm Hearing. True facts about the owl. Yep, it's caturday once again so you know what that means: it's time for an animal video! Today's video is about owls. It combines parody and humour with accurate information, which makes it especially fun to watch. SNL takes on Google Glass. Tales of Everyday Gingerism. Tales of Everyday Gingerism is my way of sharing a few stories that amuse me. I'm working with my friend, animator Cat Bruce, to bring these episodes to life.

Just to be clear, these are not meant to be a complaint, just windows into my experience since I moved to Scotland four years ago. I hope you enjoy them. Lip Sync Battle with Paul Rudd. MARCEL THE SHELL WITH SHOES ON. Walking City: An Evolving Video Sculpture Morphs in Response to Architecture. Anyone who follows Colossal knows that digital animation and motion graphics are a rarity here, but this clip is a solid exception. Created by Universal Everything, Walking City is a slowly evolving video sculpture that gradually changes form through dozens of permutations while the core motion, the act of walking, remains the same.

Via Universal Everything: Referencing the utopian visions of 1960’s architecture practice Archigram, Walking City is a slowly evolving video sculpture. The language of materials and patterns seen in radical architecture transform as the nomadic city walks endlessly, adapting to the environments she encounters. At almost 8 minutes long it’s a captivating view for such a simple premise, it’s fun to imagine the buildings and architectural designs that inspire each step. Lip Sync Battle with Joseph Gordon Levitt, Stephen Merchant and Jimmy Fallon. Totally Biased: NYC Women Talk Cat Calling. Belgium film on street harassment strikes a chord across Europe. Femme de la Rue: sexism on the streets of Brussels. Link to video: Femme de la Rue: sexism on the streets of Brussels When Sofie Peeters moved to Brussels for a film degree, she found herself confronted with a depressing problem almost every time she left her front door.

VieDeMeuf : Les Relous. Black Woman Walking - By Tracey Rose (Still Think This Is A Joke?) When Sarah Silverman and Jesus Chat About Abortion, Who Could Possibly Be Offended? If there's one thing that can finally bring America together on this whole abortion issue, it's definitely a blasphemous video of Sarah Silverman hanging out with her feminist bestie, Jesus Christ. Sweden Is Proud That Living There Is Like Being a Spoiled Rich Man-Child. She Lied To Herself Every Night For A Year. Here's What Happened When She Was Honest. Carn - Jeff Le Bars. Westboro Mingle, A Parody Dating Site for the Westboro Baptist Church. CutMovie.co.uk - Brought to you by Women's Aid HD version. Guang Dong - Pas de deux - LE PLUS GRAND CABARET DU MONDE.

Someone should tell this girl that this can't be done. Short of the Week - Choros. Sasha dances to Istanbul (Not Constantinople) on Bunheads. Danse_des_heures_Liceu.avi. The Election: How's This For Evil Politicians?