Glass at LRT stations could be hazard for birds. The glass LRT stations may be a hazard to the Ottawa bird population, an animal activist group warns. 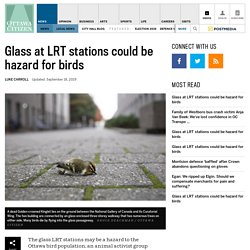 “The new LRT stations are, objectively, not bird-friendly,” Safe Wings Ottawa wrote on its website. “These structures feature large expanses of clear glass, often in areas with a lot of nearby vegetation and high levels of bird activity. They are also lit up quite brightly, creating light pollution that contributes to bird collisions.” As for what defines a bird-friendly structure, Anouk Hoedeman co-ordinator of Safe Wings Ottawa, said it’s a matter of less glass.

“It comes down to using less glass and any glass that is used has a pattern on it so that birds can see it,” she said. As for examples of bird friendly planning Hoedeman said Toronto’s newer transit infrastructure has done well and Ottawa could benefit by following suit. No, this island of pumice will not help save the Great Barrier Reef. It's a stunning picture: a raft of pumice the size of a city floating along the Pacific Ocean. 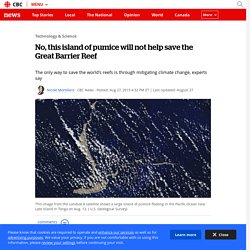 While some news outlets have hailed it as a possible answer to saving the dead and dying coral of the Great Barrier Reef off the coast of Australia, it's by no means an answer to coral reefs' battle against warming waters as global ocean temperatures rise. "No," said Mark Eakin, director of Coral Reef Watch, a program that monitors global coral reef systems. "Floating pumice is not going to save the Great Barrier Reef. It's that simple. " Coral is a single animal made up of hundreds to thousands of small creatures called polyps. Grooming for 'natural beauty' messes up beach biodiversity. Share this Article You are free to share this article under the Attribution 4.0 International license. 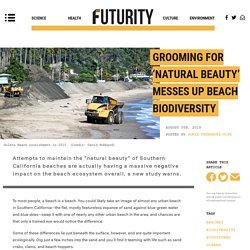 Attempts to maintain the “natural beauty” of Southern California beaches are actually having a massive negative impact on the beach ecosystem overall, a new study warns. To most people, a beach is a beach. You could likely take an image of almost any urban beach in Southern California—the flat, mostly featureless expanse of sand against blue-green water and blue skies—swap it with one of nearly any other urban beach in the area, and chances are that only a trained eye would notice the difference. Save bees by holding back on the mowing, gardeners urged. Nature is in its worst shape in human history, UN report says. Nature is in more trouble now than at any other time in human history, with extinction looming over one million species of plants and animals, scientists said Monday in the UN's first comprehensive report on biodiversity. 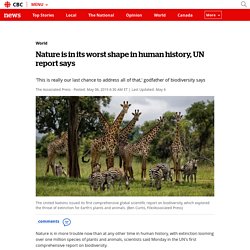 It's all because of humans, but it's not too late to fix the problem, the report by the United Nations says. Species loss is accelerating to a rate tens or hundreds of times faster than in the past, the report said. More than half a million species on land "have insufficient habitat for long-term survival" and are likely to go extinct, many within decades, unless their habitats are restored. 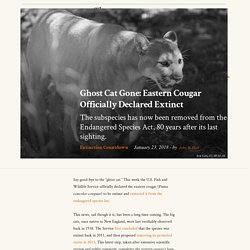 Say good-bye to the “ghost cat.” This week the U.S. Fish and Wildlife Service officially declared the eastern cougar (Puma concolor couguar) to be extinct and removed it from the endangered species list. 11 species added to Canadian at-risk list. This June saw the addition of eleven species to Canada’s species-at-risk list, a move many consider to be long overdue. 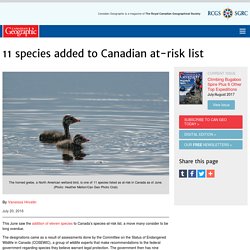 The designations came as a result of assessments done by the Committee on the Status of Endangered Wildlife in Canada (COSEWIC), a group of wildlife experts that make recommendations to the federal government regarding species they believe warrant legal protection. Is biodiversity the enemy of nature? - Conservation. It’s easy to use a word so often that its meaning is taken for granted. 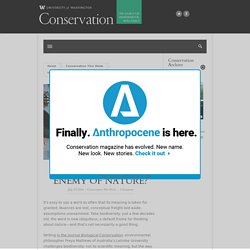 Nuances are lost, conceptual freight laid aside, assumptions unexamined. Theconversation. Two separate studies from the United States and England, both published today, show evidence that populations of butterflies and wild bees have declined in association with increased neonicotinoid use. 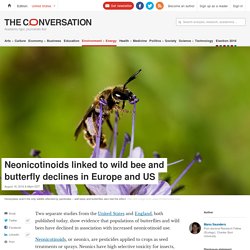 Neonicotinoids, or neonics, are pesticides applied to crops as seed treatments or sprays. Neonics have high selective toxicity for insects, meaning they are more toxic to insects than mammals. When insects eat the treated plants, the pesticides affect the insects' health, behaviour and reproductive success. While there have been few studies in the natural environment until now, concerns about the ecological impact of neonics, including their possible link to bee declines, led the European Union to restrict their use in 2013.

EU scientists are currently reviewing the ban, with recommendations expected next year. What do the new studies tell us? In the US study, researchers looked at 40 years of butterfly data in northern California. The second study looked at wild bee populations in the UK. Norway Becomes World’s First Country to Ban Deforestation. Piling stones in or along creeks or at the base of waterfalls is damaging to ecological cycle. The World map from a wild animal perspective. Five hotbeds of biodiversity - Amazon Rain Forest. Biodiversity study sounds an extinction alert (for things with spines) If a creature has a spine and walks, flies, swims, or crawls, it may be in serious trouble. 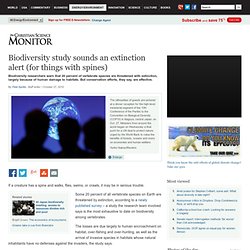 Skip to next paragraph Subscribe Today to the Monitor Click Here for your FREE 30 DAYS ofThe Christian Science MonitorWeekly Digital Edition Some 20 percent of all vertebrate species on Earth are threatened by extinction, according to a newly published survey – a study the research team involved says is the most exhaustive to date on biodiversity among vertebrates.