Plant blindness in smartphone identification applications – are we passing on our biases to our helpful apps? It is well-known that people are better at identifying animals than plants and this relative inability of people to identify plants is increasingly termed “plant blindness”. 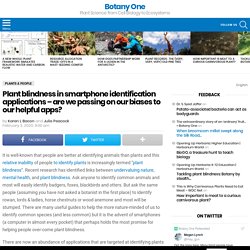 Recent research has identified links between undervaluing nature, mental health, and plant blindness. Ask anyone to identify common animals and most will easily identify badgers, foxes, blackbirds and otters. But ask the same people (assuming you have not asked a botanist in the first place) to identify rowan, lords & ladies, horse chestnuts or wood anemone and most will be stumped. There are many useful guides to help the more nature-minded of us to identify common species (and less common) but it is the advent of smartphones (a computer in almost every pocket) that perhaps holds the most promise for helping people over-come plant blindness. There are now an abundance of applications that are targeted at identifying plants and animals. References Adams, R. (2019). Pearson, DG. & Craig, T. (2014) The great outdoors? Google is the best plant ID app and it will only get better.

There’s been lots of hype about plant ID apps and having tried most of them I’ve never been impressed. 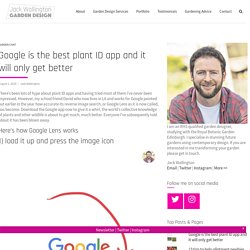 However, my school friend David who now lives in LA and works for Google pointed out earlier in the year how accurate its reverse image search, or Google Lens as it is now called, has become. Download the Google app now to give it a whirl, the world’s collective knowledge of plants and other wildlife is about to get much, much better. Everyone I’ve subsequently told about it has been blown away. Here’s how Google Lens works 1) load it up and press the image icon 2) take a photo or select one from your phone 3) Search for matches Google will then use patterns and colours in the photo to conduct a search online for matching images. 4) scroll down if it’s not there Sometimes it’s close but the correct species isn’t there, but it’s usually almost there and the correct species may be further down.

Interactive guide to common woody plants of the UK - KeyToNature / Dryades. Glossary for interactive keys and tools @ LSU Herbarium. Abaxial : Surface furthest from the axis; usually the lower side of a structure, such as a leaf or a bract. achene : A dry, indehiscent one-seeded fruit in which the seed is readily separated from the fruit wall. 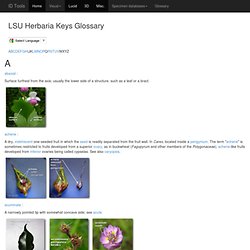 In Carex, located inside a perigynium. The term "achene" is sometimes restricted to fruits developed from a superior ovary, as in buckwheat (Fagopyrum and other members of the Polygonaceae), achene-like fruits developed from inferior ovaries being called cypselas. Acuminate : A narrowly pointed tip with somewhat concave side; see acute. acute : A pointed tip with straight or slightly convex sides; see acuminate. adaxial : Surface nearest the axis, usually the upper side of a structure; such as a leaf or bract. adnate : Used to describe two different structures that are fused together; compare with connate. A visual key utilizing both gestalt and analytic identification approaches to Carices of N.A. New Tree App Builds Partnerships Between Citizens and Scientists. 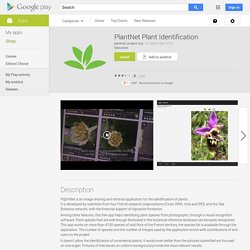 It contains fact sheets for 969 woody plants from all over North America with an in depth description, range map and thousands of color images of leaves, flowers, fruit, twigs, bark and form. Users can narrow the species list for any location in North America using the phone's GPS, network signal or any entered address or zip code. Basically the application can become “Woody Plants of Where You Are Standing”. For example, it can become the “Woody Plants of Southwestern Oregon” , the “Woody Plants of Central Park” or the or “The Woody Plants of 37.108 lat., -80.452 long., elevation 2118”. Users can further narrow the species list by answering a series of very simple tree attribute questions such as where the plant is growing, leaf shape, leaf arrangement, flower color or fruit type. Text and photography by John R. Leafsnap: An Electronic Field Guide. Plantifier on the App Store. PlantSnapp: plant identification, flower.s and garden.ing tip.s.