Serotonin map of brain could lead to better targeted antidepressants. Research that aims to map the activity of serotonin in the brain could revolutionise the use of antidepressants and behavioural therapy for people with mental illnesses. 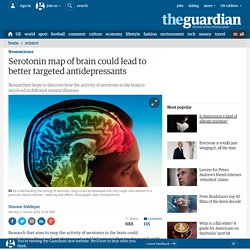 The neurotransmitter serotonin has long been associated with mood, with drugs that boost the chemical in the brain helping to alleviate the symptoms of common illnesses such as depression and anxiety, but scientists lack a deep understanding of how it mediates different mood disorders. By understanding the biology of serotonin, the hope is that drugs can be created that only target cells relevant to a particular disorder and behavioural therapies can be made more effective, reducing the need for antidepressants. Dr Jeremiah Cohen, an assistant professor at the Johns Hopkins Brain Science Institute in Baltimore, said: “The ultimate aim is to understand the biology of mood and how groups of cells in the brain connect to produce our emotional behaviour.

Andrew Solomon: Depression, the secret we share. Robin Williams's death: a reminder that suicide and depression are not selfis... News broke today that Robin Williams had passed away, due to apparent suicide following severe depression. 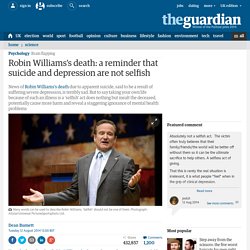 As the vast majority of people will likely have already said, this was terribly heart-breaking news. Such an iconic, talented and beloved figure will have no shortage of tributes paid to him and his incredible legacy. It’s also worth noting that Robin Williams was open about his mental health issues. Reporting Robin Williams’ suicide: how not to kill your readers. Yesterday, as I went to work news broke that the actor, Robin Williams, had been found dead in his flat in a suspected suicide. 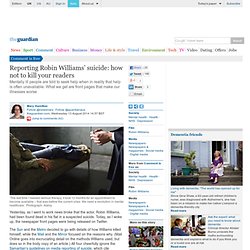 Photography as a Balm for Mental Illness. Slide Show From Darkness to Light. 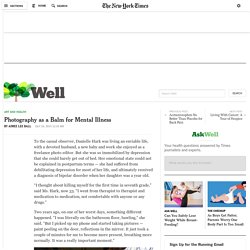 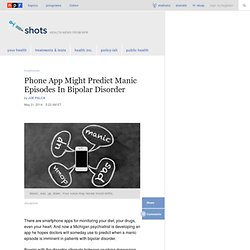 Your voice may reveal mood shifts. iStockphoto There are smartphone apps for monitoring your diet, your drugs, even your heart. And now a Michigan psychiatrist is developing an app he hopes doctors will someday use to predict when a manic episode is imminent in patients with bipolar disorder. People with the disorder alternate between crushing depression and wild manic episodes that come with the dangerous mix of uncontrollable energy and impaired judgment.

There are drugs that can prevent these episodes and allow people with bipolar disorder to live normal lives, according to Dr. Mindfulness and Stress Reactions: Getting Off the Elevator of Distress. A good friend of mine describes her depression as an elevator that takes her down to an unfurnished basement with toxic mold, the stench of cat urine and no windows. 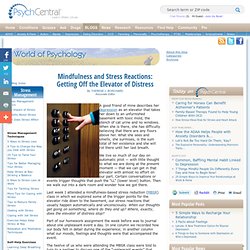 When she is there, she has difficulty believing that there are any floors above her. What she sees and smells, she surmises, is the sum total of her existence and she will rot there until her last breath. We live so much of our day on automatic pilot — with little thought to what we are doing at the present moment — that we can get in that elevator with almost no effort on our part.

Certain conversations or events trigger thoughts that push the “LL” (lower level) button. What on earth is mindfulness? In the last few years, you might have noticed a new word make its way into the media: “mindfulness”. 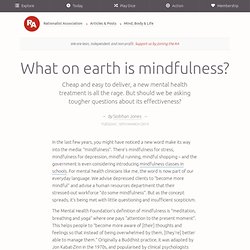 There’s mindfulness for stress, mindfulness for depression, mindful running, mindful shopping – and the government is even considering introducing mindfulness classes in schools. For mental health clinicians like me, the word is now part of our everyday language. We advise depressed clients to “become more mindful” and advise a human resources department that their stressed-out workforce “do some mindfulness”. But as the concept spreads, it’s being met with little questioning and insufficient scepticism. The Mental Health Foundation’s definition of mindfulness is “meditation, breathing and yoga” where one pays “attention to the present moment”.

NICE, which makes recommendations based on scientific trials, mainly takes its evidence from randomised controlled trials (RCTs), seen as the gold standard of scientific enquiry. Stress. Stress can be defined as the way you feel when you’re under abnormal pressure. All sorts of situations can cause stress. The most common involve work, money matters and relationships with partners, children or other family members.

Esoterica » Blog Archive » Seven Days With Depression. I’d been meaning to try out a new illness ever since the crazy times I had on the Norovirus, so when I was offered a week’s trial of depression I jumped at the opportunity. 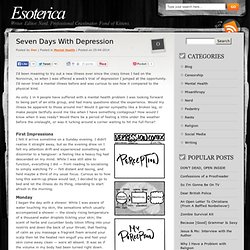 I’d never tried a mental illness before and was curious to see how it compared to the physical kind. March 28, 1941: Virginia Woolf’s Suicide Letter and Its Cruel Misinterpretation in the Media. Dealing with Depression. I begin by saying I am an expert only in my own self. 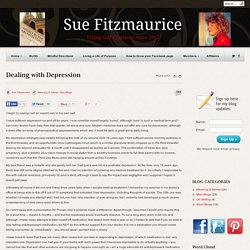 I have suffered depression on and off for years; I now consider myself largely ‘cured’, although ‘cure’ is such a medical term and I can’t say I found much help from that quarter, let alone any cure. Modern medicine does not offer any cure for depression, although it does offer an array of pharmaceutical appeasements which are, it must be said, a great aid to daily living. LilacLounge : Depression: a most informative...