Home - The Australian Fisheries Management Authority (AFMA) Rio 2016: Swimmers need to ingest only three teaspoons of water to be almost certain of contracting a virus. Just days ahead of the Olympic Games the waterways of Rio de Janeiro are as filthy as ever, contaminated with raw human sewage teeming with dangerous viruses and bacteria, according to a 16-month-long study commissioned by the Associated Press. 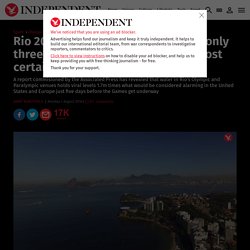 Not only are some 1,400 athletes at risk of getting violently ill in water competitions, but the AP's tests indicate that tourists also face potentially serious health risks on the golden beaches of Ipanema and Copacabana. The AP's survey of the aquatic Olympic and Paralympic venues has revealed consistent and dangerously high levels of viruses from the pollution – a major black eye on Rio's Olympic project that has set off alarm bells among sailors, rowers and open-water swimmers.

What's in Rio's Bay and Beaches? From the top of Rio de Janeiro’s Sugarloaf or the Christ the Redeemer statue that towers above the city, Guanabara Bay looks picturesque. 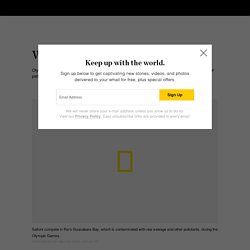 But the ailing estuary, site of the Olympic’s sailing and rowing, is anything but pristine. Roughly 16 million people live around the bay, making it one of the world’s most densely populated urban areas. Many neighborhoods lack proper sanitation, causing squalid water conditions, including raw sewage and extreme levels of disease-causing microorganisms in Guanabara Bay. 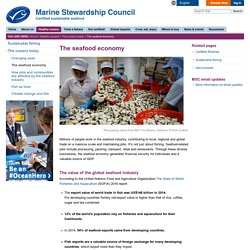 It's not just about fishing. Seafood-related jobs include processing, packing, transport, retail and restaurants. Through these diverse businesses, the seafood economy generates financial security for individuals and a valuable source of GDP. Image result for info graphic pollution ocea. Image result for brazil water pollution infographi. Trash Pollution : Ocean Health Index. How Was It Measured? 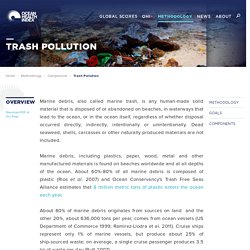 Why the Great Barrier Reef is Dying. Fish of every imaginable colour race between the corals as the sun’s rays dance through the ocean’s surface. 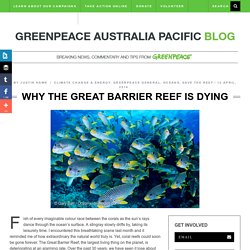 A stingray slowly drifts by, taking its leisurely time. I encountered this breathtaking scene last month and it reminded me of how extraordinary the natural world truly is. Yet, coral reefs could soon be gone forever. The Great Barrier Reef, the largest living thing on the planet, is deteriorating at an alarming rate. Over the past 30 years, we have seen it lose about 50% of its coral. Abbot Point. Located 25 km north-west of Bowen on Queensland’s north coast, Abbot Point is placed between the existing industrial centres of Townsville to its north, and Mackay to its south. 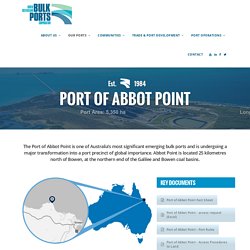 It is also adjacent to the Abbot Point State Development Area (APSDA), a 16,320 hectare site for dedicated industrial development. Abbot Point has currently one operating terminal, Adani Abbot Point Terminal (AAPT or T1). T1 was acquired by the Adani Group by way of a long term lease from the Queensland Government on 1 June 2011. T1 is operated by Abbot Point BulkCoal (APB) under a long term Operations and Maintenance Agreement that was acquired by Adani as part of the sale from NQBP. APB is a controlled subsidiary of Glencore.

Abbot Point: Federal Government approves huge coal port expansion near Great Barrier Reef. Updated Federal Environment Minister Greg Hunt has given the go-ahead to the expansion of the Abbot Point Coal Terminal near Bowen in north Queensland, making it one of the world's largest coal ports. 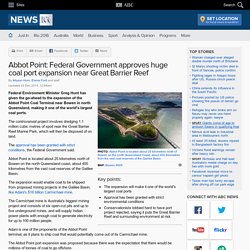 Key points: The expansion will make it one of the world's largest coal portsApproval has been granted with strict environmental conditionsConservationists lobbied hard to have port project rejected, saying it puts the Great Barrier Reef and surrounding environment at risk. Sustainable Development Goals Explained: Life Below Water. Environment Protection and Biodiversity Conservation Act 1999 (EPBC Act) Home Page. SDG 14: Life below water. A local fisherman’s boat in the waters off Atauro Island, Timor-Leste. 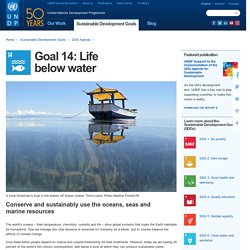 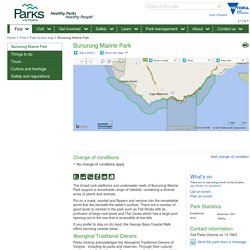 Put on a mask, snorkel and flippers and venture into the remarkable world that lies beneath the water's surface. There are a number of good spots to snorkel in the park such as Flat Rocks with its profusion of large rock pools and The Caves which has a large pool opening out to the sea that is accessible at low tide. If you prefer to stay on dry land, the George Bass Coastal Walk offers stunning coastal views. Parks Victoria acknowledges the Aboriginal Traditional Owners of Victoria - including its parks and reserves. Oceans - United Nations Sustainable Development. OceansFlorencia Soto Nino2016-08-17T17:46:17+00:00 Share this story, choose your platform! 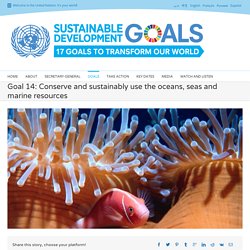 The world’s oceans – their temperature, chemistry, currents and life – drive global systems that make the Earth habitable for humankind.