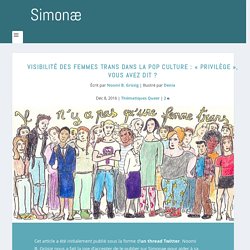 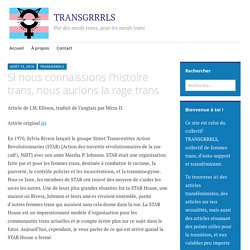 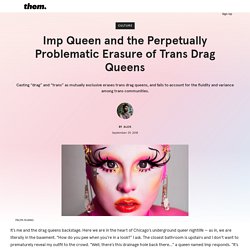 Here we are in the heart of Chicago’s underground queer nightlife — as in, we are literally in the basement. “How do you pee when you’re in a look?” I ask. The closest bathroom is upstairs and I don’t want to prematurely reveal my outfit to the crowd. Socialization Arguments Are Transmisogyny. Trigger warnings: anti-gay slurs, transmisogyny, self-harm. I am exhausted. The Early 20th-Century ID Cards That Kept Trans People Safe From Harassment. Katharina T., a resident of Berlin in the early 20th century, had a deep voice and masculine appearance, and preferred to wear men’s clothing at home and in public. 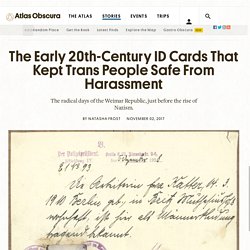 In 1908, they—there’s no record of which pronoun Katharina preferred—went to visit the sexual reformer and “sexologist” Magnus Hirschfeld, to apply for official documentation that would allow them to wear men’s clothing in public: a “transvestite pass.” Perhaps dozens of these passes were granted by German police between 1909 and 1933, the year Adolf Hitler became chancellor. The term “transvestitism” at that time encompassed people of all gender identities, from those who occasionally wore men’s or women’s clothes on weekends, to those who today might well identify instead as transgender, a term that was not in common usage at the time. Cross-dressing individuals were vulnerable to arbitrary decisions of the police, usually according to how well they “passed.” Le sexe et le genre sont en fait la même chose (mais ne partez pas si vite) [TRADUCTION] – Furie Gélatine.

Ce texte est une traduction de l’article “Sex and gender are actually the same thing (but bear with me)”. 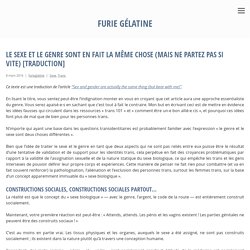 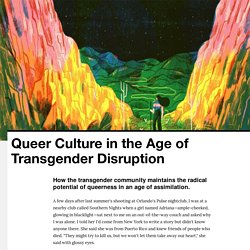 I told her I'd come from New York to write a story but didn't know anyone there. She said she was from Puerto Rico and knew friends of people who died. "They might try to kill us, but we won't let them take away our heart," she said with glossy eyes. Grief and desire have a peculiar way of dovetailing, and I was overcome with a desire to kiss her as we continued talking. I-D Meets: Hari Nef. 105 Trans Women On American TV: A History and Analysis. Until about five years ago, it was nearly impossible to find even a kinda positive portrayal of trans women on American television. 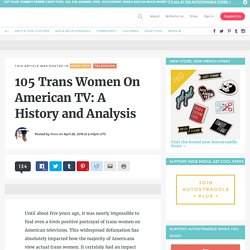 This widespread defamation has absolutely impacted how the majority of Americans view actual trans women. It certainly had an impact on me growing up — not knowing any out trans women in real life, all I knew about them was what I saw on TV and in the movies. Trans women were pathetic, violent, disposable, or the butt of a joke. They endured misgendering and slurs from their loved ones and laughed along when humiliated. They were violently outed and interrogated about their penises, and this was considered okay. I'm A Trans Parent Raising A Trans Kid & This Is What It's Like. I’m genderqueer. 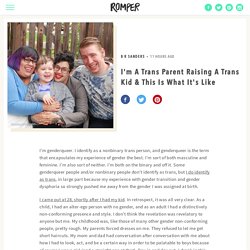 I identify as a nonbinary trans person, and genderqueer is the term that encapsulates my experience of gender the best. I’m sort of both masculine and feminine. Trans People Talk To Their Younger Selves. Transitioning to Freedom. Feminine Beauty Passing Transwoman Experience. Beauty is not a toothless enterprise. 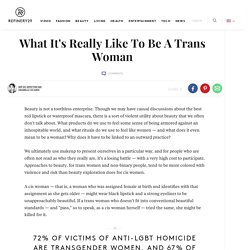 Though we may have casual discussions about the best red lipstick or waterproof mascara, there is a sort of violent utility about beauty that we often don't talk about. What products do we use to feel some sense of being armored against an inhospitable world, and what rituals do we use to feel like women — and what does it even mean to be a woman? Why does it have to be linked to an outward practice? We ultimately use makeup to present ourselves in a particular way, and for people who are often not read as who they really are, it's a losing battle — with a very high cost to participate. Approaches to beauty, for trans women and non-binary people, tend to be more colored with violence and risk than beauty exploration does for cis women. Trans Models Transform Modeling. Human Installation I: "OBSOLESCENZA DEL GENERE" by KYRAHM + JULIUS KAISER. Transgender Rights WW2 Veteran Robina Asti Interview. Robina Asti is exhausted, but you wouldn't know it as she opens the door to the Upper East Side apartment she's called home since 1965. 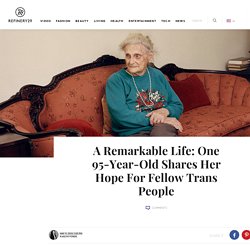 She's dressed in a green top and tan slacks, her white hair is swept up in barrettes, and two turquoise earrings dangle from her ears — the first pair her late husband, Norwood, ever bought her. What Happens If You're A Trans Person Who Doesn't Feel "Trapped In The Wrong Body" The Matrix as a Transgender Coming Out Story. A couple of days ago, I saw a video claiming that The Matrix was a transgender coming out film.

I hadn’t watched The Matrix in years, but this struck a chord in me. It felt right. I found my old DVD of the movie and started live-tweeting the main transgender themes from the first Matrix movie. As I admit during the live-tweeting, I was an idiot back in 1999 and didn’t catch the overt transgender allegory, but many others did. Trans visibility: acceptance, TV shows and violence. Today, March 31, is Trans Day of Visibility. It is a day created as recently as 2010 (a reminder of how nascent much trans-led activism is) by the transgender Michigan activist Rachel Crandall. Its creation was decided on the basis that the only international day for the transgender community that existed before 2010 was Transgender Day of Remembrance, on November 20 every year.

That day is specifically set aside to remember all those trans and gender nonconforming people who have died each year – either due to suicide or murder. Lists of names are read aloud in many local LGBT communities; names of those trans people – usually black, Asian and Latina trans women or femmes – who have been killed, often without justice. Sometimes their bodies are returned to families who had disowned them, where they’re buried under names they had shed and in wilful ignorance of the authentic life they actually lived. But, wait – 2015 also saw the highest global murder rate of trans people on record.

25 Years Of Transphobia In Comedy. Independent work - Sarah Wong. Rain Dove Talks Being A Runway Model & Gender Capitalist At NYFW — VIDEO. The face of fashion is ever-changing, but one woman who is redefining evolution in this industry is gender capitalist and runway model Rain Dove, the subject of Bustle’s latest documentary short. Dove's androgynous look has landed her several high-profile runway shows and ad campaigns (as both a male and a female), yet it seems that there is still a long way to go for her and other models who break the gender binary to reach the same level of success as their straight counterparts. However, Dove explained how being a genderqueer model has opened the door for her to represent the community. The Best Thing We Saw at Art Basel Was This Transgender Visibility Panel With Juliana Huxtable.

Everywhere from politics to pop culture, awareness of the transgender community swept the country this year. But beyond the most prominent examples, like Caitlin Jenner's on-screen transition and Hulu's Transparent, how are transgender issues and non-binary gender realities communicated to the masses in the media? On Saturday December 5, the organizers of Art Basel Miami Beach assembled an impressive cast of panelists to examine this very question—including the New York-based DJ and artist Juliana Huxtable, and Black Contemporary Art founder/Instagram star Kimberly Drew (AKA @Museummammy).