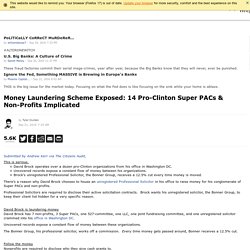 CLINTON CASH OFFICIAL DOCUMENTARY MOVIE ( FULL ) Huma Abedin worked at a radical Muslim journal for a dozen years. Hillary Clinton’s top campaign aide, and the woman who might be the future White House chief of staff to the first female US president, for a decade edited a radical Muslim publication that opposed women’s rights and blamed the US for 9/11. 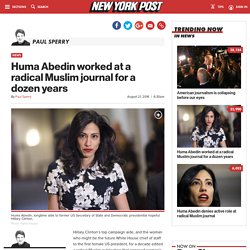 One of Clinton’s biggest accomplishments listed on her campaign Web site is her support for the UN women’s conference in Bejing in 1995, when she famously declared, “Women’s rights are human rights.” Her speech has emerged as a focal point of her campaign, featured prominently in last month’s Morgan Freeman-narrated convention video introducing her as the Democratic nominee. However, soon after that “historic and transformational” 1995 event, as Clinton recently described it, her top aide Huma Abedin published articles in a Saudi journal taking Clinton’s feminist platform apart, piece by piece. At the time, Abedin was assistant editor of the Journal of Muslim Minority Affairs working under her mother, who remains editor-in-chief. Photo: Getty Images. Why Hillary Clinton Doesn't Deserve The Black Vote but Jill Stein Does.

Crooked Polls for Crooked Hillary? Can the 2016 election be rigged? You bet. Donald Trump. 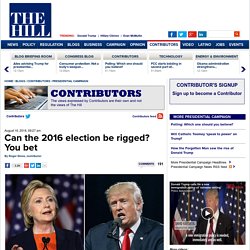 Hillary Clinton and the Whitewater Controversy: A Close-Up. Obama supporters will go hysterical over this well sourced list of 650 examples of his lying, lawbreaking, corruption, cronyism, etc. By Dan from Squirrel Hill August 15, 2013 As the author of this blog post, I place it into the public domain. 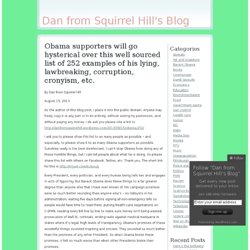 Anyone may freely copy it in any part or in its entirely, without asking my permission, and without paying any money. I do ask you please cite a link to I ask you to please show this list to as many people as possible – and especially, to please show it to as many Obama supporters as possible. Obama’s Benghazi Corrupt Media Family Tree: Check out this lineage of connections – Great Graphic!! VIRAL POST : Bernie Supporter Explains Why He is Now Voting for Donald Trump! – TruthFeed. The original viral post can be seen here. 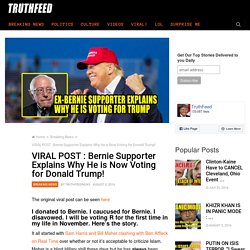 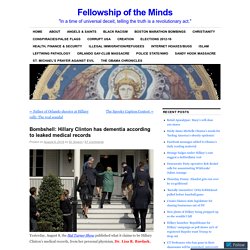 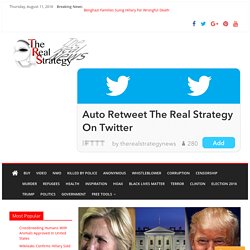 TRS Poll – The Real Strategy has created a new accurate form of polling to expose how rigged the mainstream polls are. First, you have to understand what our political scene in the US looks like right now. For ppl just tuning in here's a summary of DNC staffer #SethRich's murder. Assange now points to him as the leaker. Wall Street Whistleblower Calls Clinton Foundation ‘Charity Fraud’ A Wall Street whistleblower has found a new target for investigation of financial irregularities, and it’s bad news for the Hillary Clinton campaign. 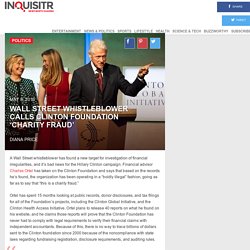 Financial advisor Charles Ortel has taken on the Clinton Foundation and says that based on the records he’s found, the organization has been operating in a “boldly illegal” fashion, going as far as to say that “this is a charity fraud.” Ortel has spent 15 months looking at public records, donor disclosures, and tax filings for all of the Foundation’s projects, including the Clinton Global Initiative, and the Clinton Health Access Initiative. Ortel plans to release 40 reports on what he found on his website, and he claims those reports will prove that the Clinton Foundation has never had to comply with legal requirements to verify their financial claims with independent accountants. “To my shock and horror, as I tore it apart, I realized it was overvalued in the hundreds of millions of dollars. Hillary Clinton's doctors say blood clot is located between her brain and skull. Doctors treating the blood clot suffered by the US secretary of state, Hillary Clinton, revealed on Monday that it is located in a vein between her brain and skull. 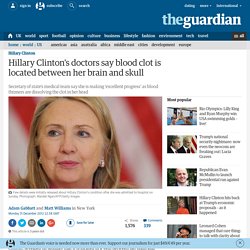 In a statement, clinicians said Clinton, 65, was being treated with blood thinners to help dissolve the clot. They said Clinton was making "excellent progress" and had not suffered any neurological damage. Clinton was admitted to New York-Presbyterian hospital on Sunday after doctors discovered the clot during a follow-up exam to a concussion she suffered in mid-December. Initially, few details were released about her condition. But late on Monday, Dr Lisa Bardack of the Mt Kisco Medical Group and Dr Gigi El-Bayoumi of George Washington University released a statement that gave the location of the clot.

"In the course of a routine follow-up MRI on Sunday, the scan revealed that a right transverse sinus venous thrombosis had formed. "To help dissolve this clot, her medical team began treating the secretary with blood thinners. The crusade of a Democratic superlawyer with multimillion-dollar backing. PHOENIX — After a lopsided string of court victories knocking down state voting restrictions, Democratic superlawyer Marc E. 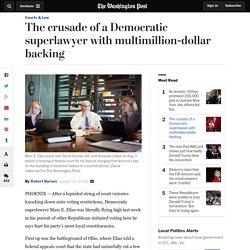 Elias was literally flying high last week in his pursuit of other ­Republican-initiated voting laws he says hurt his party’s most loyal constituencies. First up was the battleground of Ohio, where Elias told a federal appeals court that the state had unlawfully cut a few days of early voting disproportionately used by African Americans. Less than 24 hours later, the lawyer whose firm counts Hillary Clinton and the Democratic National Committee among its clients was in a federal courtroom 1,600 miles away. Hillary Clinton’s chief strategist Joel Benenson on bringing campaign tactics to brands. Presidential elections in the US are notoriously punishing affairs. Beginning with the Democratic and Republican primaries – where each party’s candidate is chosen – and ending with the vote for the White House itself, campaigning stretches over 18 months and takes in nationwide tours, high-pressure TV debates and various forms of mud-slinging between, and within, the two sides.

Joel Benenson has become a pivotal figure in this hugely competitive arena. As chief pollster and strategist for Barack Obama in 2008, he helped the Democrats’ candidate sweep to power in what is widely considered to be one of the most impressive political campaigns in history. Having helped Obama win again in 2012, Benenson is now chief strategist for fellow Democrat Hillary Clinton’s 2016 campaign to succeed him. 10 reasons why #DemExit is serious: Getting rid of Debbie Wasserman Schultz is not enough. Shortly after Bernie Sanders publicly endorsed Hillary Clinton a new hashtag trended on Twitter: #DemExit. The hashtag offered Sanders supporters a chance to vent their frustrations with the Democratic Party and with the sense that their candidate had been pressured into an endorsement.

Rather than reach out to these disaffected voters, the Democratic National Committee (DNC) ignored them. Understood within the larger narrative that Sanders supporters were just whining brats who refused to concede and move on, #DemExit was dismissed as just more sour milk. Under Hillary, US Sold $66 Million In Chemical Arms To Clinton Foundation Donors Gassing Their Citizens. As Hillary Clinton’s bid for The White House ramps up, contributions to The Clinton Foundation charities have come under increased scrutiny. Hillary's Emails: Hating Israel. There are many reasons to dislike Hillary Clinton. For one, she’s an unrepentant liar, fabricating everything from her Brian Williamesque brush with death in Bosnia to her parent’s pedigree to her claim that she believed a video caused the deaths of four heroes in Benghazi.

She is also unethical, having accepted large sums of money to the Clinton Foundation from countries and entities working on behalf of foreign governments impacted by her decisions as secretary of state. There is some circumstantial evidence suggesting that she may have been influenced by these rather large contributions. In one well publicized case, Russia was able to acquire 20% of the United States’ uranium reserves in an energy deal that required State Department approval. Paris strikes astonishing partnership with secret Isis sponsor tied to Hillary Clinton [EXCLUSIVE] The City of Paris has struck a corporate partnership with French industrial giant, Lafarge, recently accused of secretly sponsoring the Islamic State (Isis or Daesh) for profit. Documents obtained by several journalistic investigations reveal that Lafarge has paid taxes to the terror group to operate its cement plant in Syria, and even bought Isis oil for years. Yet according to the campaign group, SumOfUs, Lafarge is the corporate partner and sand provider to the City of Paris for this summer’s Paris-Plages urban beach event.

The project run by Office of the Mayor of Paris, Anne Hidalgo, will create artificial beaches along the river Seine in the centre and northeast of Paris. Lafarge also has close ties to Democrat presidential candidate Hillary Clinton. Apart from being a regular donor to the Clinton Foundation, Clinton herself was a director of Lafarge in the early 1990s, and did legal work for the firm in the 1980s. Undercover video exposes eye-popping ease of voter fraud.

Hillary Clinton: The Champion for Women? The DNC Lovefest! Democratic Establishment Steals Nevada Caucus Win From Bernie Sanders. Nevada Democratic Convention: Stories of Voter Suppression. Bernie Sanders’ delegates found their demand for a recount denied without a vote at the Nevada Democratic Convention on Saturday. Nevada Democratic Convention: Stories of Voter Suppression. Inside the bitter last days of Bernie's revolution. There’s no strategist pulling the strings, and no collection of burn-it-all-down aides egging him on. At the heart of the rage against Hillary Clinton and the Democratic Party, the campaign aides closest to him say, is Bernie Sanders. Clinton campaign chair John Podesta: ‘Emotional’ Sanders supporters won’t hurt her chances. PHILADELPHIA — John Podesta, the chair of Hillary Clinton’s presidential campaign, is not concerned about lingering divisions from the Democratic primary damaging her chances in the general election.

“Look, Bernie gave a full-throated endorsement of Hillary Clinton on Monday night. Did Hillary Clinton steal Bernie Sanders delegates in Nevada? Chaos reigned at the Nevada Democratic convention on Saturday, sparking an infectious divide between supporters of Hillary Clinton and Sen. Bernie Sanders and, some believe, threatening the very foundations of democracy. Occupying the DNC. ALL KIDDING ASIDE...DID HILLARY JUST HAVE A SEIZURE In Middle Of Q & A With Journalists? You Be The Judge... [VIDEO]