Schibsted wants to circumvent the mobile adblocking apocalypse by making better, more effective ads. Imagine opening up an app, scrolling through an article, being interrupted by a full-size Clash of Clans video, trying to tap a microscopic “×” to close out of the video, and accidentally tapping into the app store. 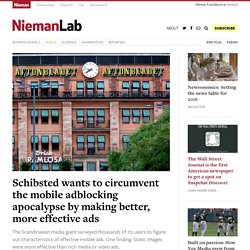 For regular smartphone phone users, this scenario’s all too common. More user-friendly mobile ads haven’t caught up to the vast potential for monetizing growing audiences on mobile. Newsonomics: Setting the news table for 2016. How can we set the table for 2016? 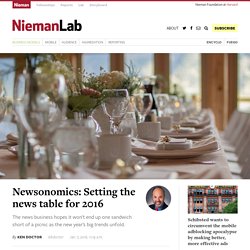 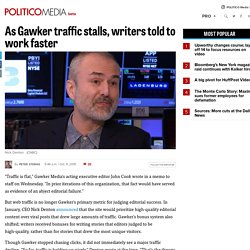 "In prior iterations of this organization, that fact would have served as evidence of an abject editorial failure. " But web traffic is no longer Gawker's primary metric for judging editorial success. In January, CEO Nick Denton announced that the site would prioritize high-quality editorial content over viral posts that drew large amounts of traffic. Gawker's bonus system also shifted; writers received bonuses for writing stories that editors judged to be high-quality, rather than for stories that drew the most unique visitors. Though Gawker stopped chasing clicks, it did not immediately see a major traffic decline. Nine months later, though, Gawker's traffic growth has stalled. Traffic may no longer be Gawker's top priority, but it still matters to the company. 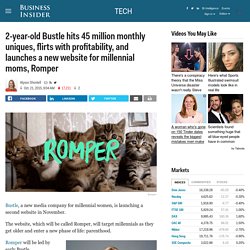 But are there really enough millennials having children to warrant a website dedicated to them? Wheeler Johnson acknowledges that the launch of Romper may be a few years premature since most millennials (ages 18 to 34) aren't yet thinking about having children. Print is the new 'new media' Photo by Chava Gourarie Print is beautiful. 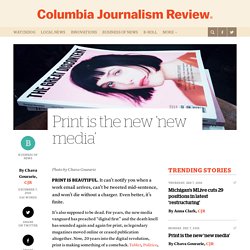 It can’t notify you when a work email arrives, can’t be tweeted mid-sentence, and won’t die without a charger. Even better, it’s finite. It’s also supposed to be dead. For years, the new media vanguard has preached “digital first” and the death knell has sounded again and again for print, as legendary magazines moved online or ceased publication altogether. Here’s why you couldn’t comment on Jay Carney’s NYT Medium post. Young money: How German legacy publishers are chasing millennial audiences. BERLIN — The efforts of venture-backed new media startups jostling for the attention of millennial audiences has crescendoed in the U.S. in the past couple of years, with sites like Vice, BuzzFeed, Fusion, Vox, Mic, and others ramping up their variety of content and their presence on social media. 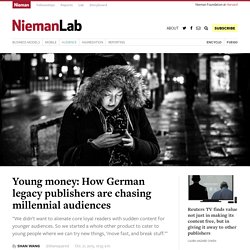 In Germany, news sites aresimilarlyseeking to capture “young” audiences. But while, in the U.S., many of these efforts to cater to millennials are propped up by venture funding, in Germany, the legacy publishers that have pushed forward their own efforts. “There’s a whole lot of movement in the German media landscape — this is an incredible time,” Sebastian Horn told me. Horn heads Ze.tt, a project from Zeit Online that first debuted in beta in July. He runs the site from a separate small office space in Berlin, tucked away behind a kitesurfing shop. The leaked New York Times innovation report is one of the key documents of this media age.

There are few things that can galvanize the news world’s attention like a change in leadership atop The New York Times. 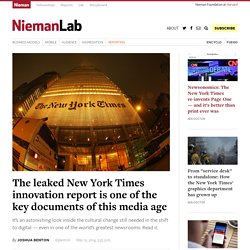 Jill Abramson’s ouster yesterday afternoon probably reduced American newsroom productivity enough to skew this quarter’s GDP numbers. We don’t typically write about intra-newsroom politics at Nieman Lab, leaving that to Manhattan’s very capable cadre of media reporters. But Abramson’s removal and Dean Baquet’s ascent has apparently inspired someone inside the Times to leak one of the most remarkable documents I’ve seen in my years running the Lab, to Myles Tanzer at BuzzFeed.

It’s the full report of the newsroom innovation team that was given six full months to ask big questions about the Times’ digital strategy. (A summary version of it was leaked last week, but this is the big kahuna.) Digital publishers face a winter of discontent. The sunny days of hot growth for digital publishers are fading into a memory as many now face a long, dark winter. 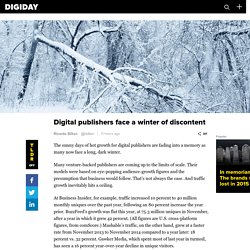 Many venture-backed publishers are coming up to the limits of scale. Their models were based on eye-popping audience-growth figures and the presumption that business would follow. That’s not always the case. And traffic growth inevitably hits a ceiling. At Business Insider, for example, traffic increased 10 percent to 40 million monthly uniques over the past year, following an 80 percent increase the year prior.