The Pitfalls of Becoming a Complacent Ally (And What to Do If You’ve Made a Mistake) We’ve all had that moment: Just when we think we’ve become good allies, somebody tells us that we’ve done or said something problematic. 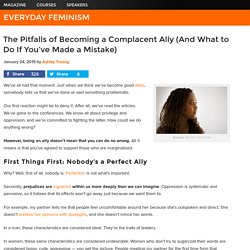 Our first reaction might be to deny it. After all, we’ve read the articles. We’ve gone to the conferences. We know all about privilege and oppression, and we’re committed to fighting the latter. How could we do anything wrong? However, being an ally doesn’t mean that you can do no wrong. L’égalité entre femmes et hommes serait un droit fondamental secondaire… What happened to the male feminist? - GQ.co.uk. The media may act as if gender equality is a done deal, but the discrimination and abuse women face every day tell a different story. 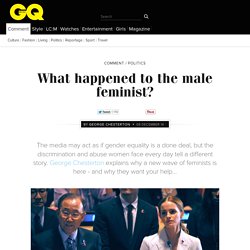 George Chesterton explains why a new wave of feminists is here - and why they want your help... Poor, well-meaning men, caught in a fog between their support for equality and the pressure to wear patronising T-shirts. Why Does Everybody Think I Care to Know How Attractive They Think I Am? The older I get, the more tired I get of people telling me what they think of my appearance. 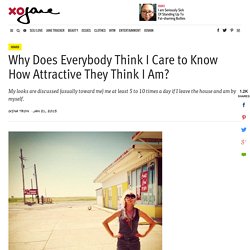 There is something so narcissistic, so presumptuous, in telling somebody what you think of their looks, and expecting a specific response. What makes random people presume that I care what their analysis on my looks, or on beauty in general is? This issue goes hand in hand with catcalling, the mentality that women need to constantly be told what everybody thinks of their looks. Being attractive, after all is apparently supposed to be the number one concern of females. I like to be complimented, of course, like most human beings do. A genuine compliment is saying something nice to somebody without any expectations, or without the intention to change the mood or actions of the receiver.

Meninism: The Hilarious Answer To Feminism. One way to judge whether Feminism is working in creating equal rights and opportunity for women is how loud and obnoxious the push back is. 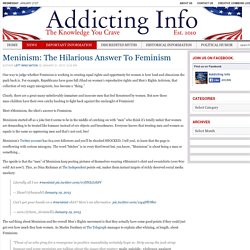 For example, Republicans have gone full Jihad on women’s reproductive rights and Men’s Rights Activism, that collection of very angry misogynists, has become a “thing.” Clearly, there are a great many unbelievably immature and insecure men that feel threatened by women. But now these man-children have their own catchy hashtag to fight back against the onslaught of Feminism! Meet #Meninism, the idiot’s answer to Feminism. Is Beyonce Turning Pre-Teens Into Strippers? Womanism. Unification is a key cornerstone of Womanism ideology. 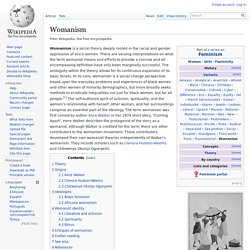 Womanism is a social theory deeply rooted in the racial and gender oppression of black women. There are varying interpretations on what the term womanist means and efforts to provide a concise and all encompassing definition have only been marginally successful. The ambiguity within the theory allows for its continuous expansion of its basic tenets. At its core, womanism is a social change perspective based upon the everyday problems and experiences of black women and other women of minority demographics, but more broadly seeks methods to eradicate inequalities not just for black women, but for all people.[1] The self-authored spirit of activism, spirituality, and the women's relationship with herself, other women, and her surroundings comprise an essential part of the ideology.

The term womanism was first coined by author Alice Walker in her 1979 short story, "Coming Apart". The Dark Psychology of the Sexist Internet Commenter. A new study has found that men and women comment on news stories very differently—and that men don't feel shy about expressing misogyny. 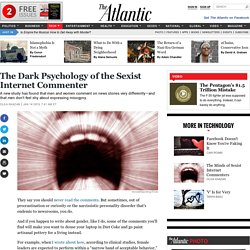 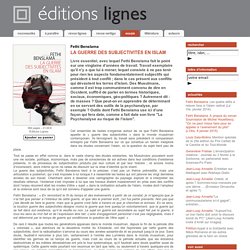 Friends of mine who'd seen the play had alerted me that the author and sole performer, Eve Ensler, mentioned my workshops. That evening I sat in a small theater listening to a charming young woman who talked about my Women's Sexuality Workshops with a distorted view of what I'd been doing for over twenty-five years. She called it "The Vagina Workshop. " Watch Jessica Chastain's Impassioned Speech For Diversity In Hollywood. 10 Reasons Why the Size Acceptance Movement is Important — Even Though it Should Be Obvious. The size acceptance movement has had its share of both highs and lows recently. 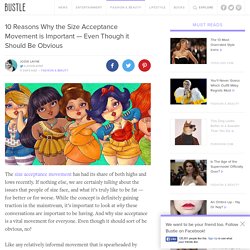 If nothing else, we are certainly talking about the issues that people of size face, and what it’s truly like to be fat — for better or for worse. While the concept is definitely gaining traction in the mainstream, it’s important to look at why these conversations are important to be having. And why size acceptance is a vital movement for everyone. Even though it should sort of be obvious, no?

Like any relatively informal movement that is spearheaded by humans, the body acceptance one has its issues. Why I’m Over the Size Acceptance Movement. My mother started me on diets when I was 7 years old. 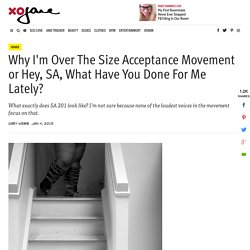 There were nutritionists, doctor visits, numerous diet plans, even Weight Watchers, and I hated every moment of it. I have a vivid memory of sitting in a WW meeting and being literally applauded for losing 9lbs in one week and being baffled by why something so irrelevant deserved applause and annoyed at being put on the spot. By the time I was 14 I had had enough. Why I'm Over The Size Acceptance Movement or Hey, SA, What Have You Done For Me Lately? Individualist feminism. Individualist feminism, sometimes also grouped with libertarian feminism, is a term for feminist ideas which emphasize individualism.[1] General[edit] Individualist feminists attempt to change legal systems in order to eliminate class privileges and gender privileges and to ensure that individuals have equal rights, including an equal claim under the law to their own persons and property.

C’est comme un avant-goût. Cette guerre que tous – toutes tendances politiques toutes religions toutes communautés – semblent appeler depuis quelque temps de toutes leurs forces, cette guerre a ce goût-là. If we liberate men’s sexuality, the war against women can end. When I became a professional dominatrix after years in the kink scene, I expected my kinky work to involve lots of spanking, whipping and bondage. And, to my delight, it has. But in the majority of my sessions, I am creating a space for men to explore areas of their sexual lives that society feels are unmanly; they come to me to be penetrated, to be used, to serve, to submit, to worship, to be taken. A client might have any or all of a bewildering array of fetishes, but they mostly come to me to experience something well outside the very narrow confines of what society says that it means to be a man. When a man enters my secret room, he steps into another world, where the taboos, rules and expectations of the outside world are lifted, or bent to serve our mutual pleasure.

Egalité des sexes à l’école : machine arrière, toute ! The Myth Of Misandry. If you're a feminist with access to the Internet, you've almost certainly stumbled upon the term misandry—i.e. contempt for men—offered as the societal counterpoint to misogyny. It's become so obnoxiously ubiquitous that I'm surprised Time didn't include it on their dubious list of words to ban in 2014. Twitter is chock full of dudes popping up out of their sad little man-holes crying “oppression!” Any time someone breathes the words male privilege, and there are huge swathes of Reddit devoted to proving that misandry is nothing short of a rampant plague destroying the moral fabric of our society.

Bi vs. Pan: 3 Ways That Language Polarizes and 3 Ways to Unite. All-Women Panel Talks TV Sex Scenes And The Problem With 'Strong Female Characters' The women of Showtime's TV series just broke down exactly why sex scenes on television are so important. On Jan. 12, the Television Critics Association held an all-women panel titled “Sexuality and Television: A Female Perspective. " The panel, which focused on the impact of sex scenes on TV, featured women from multiple Showtime series including actresses Emmy Rossum, Shanola Hampton (both from "Shameless"), Maura Tierney ("The Affair"), Caitlin FitzGerald ("Masters Of Sex"), and writer/producers Nancy Pimental ("Shameless"), Michelle Ashford ("Masters Of Sex") and Sarah Treem ("The Affair").

“Herself” – Does anyone really listen to what a naked woman says? Herself, a new “feminist” photo project currently making the rounds online, features lots of naked women. Created by a TV actress, Herself purports to “highlight’s women’s sexuality on their own terms” and “help demystify the female form, to assist in the erasure of coveting it, and to help celebrate the ever changing face of it.” Sounds legit! Comment les islamistes radicaux endoctrinent les ados françaises. Martin Pistorius, l'homme qui était conscient durant 12 ans de «coma» 3 Ways the Body-Positivity Movement Could Be More Body-Positive. Fake deep. I'm A Trans Man Who Stripped Down To Show the Importance of Top Surgery. I am one part game designer, one part pixel artist and a dash unicorn. However, for the last year, people have thought of me as a young, flamboyant man in his early twenties. For Homeless Women, Getting Their Period Is One Of The Most Difficult Challenges.

7 Reasons Why Reverse Racism Doesn't Exist - An Actor Who Got Super Famous Overnight Has Some Profound Thoughts On Celebrity Worship. 10 Questions About Why Ableist Language Matters, Answered. I Was Assaulted By a Catcaller After I Confronted Him and Told Him to Stop. Target Under Fire For Marketing Plus-Size Line Online Only. Equateur: Une reine de beauté décède suite à une liposuccion - News Monde: Faits divers. If You Cannot Love Me Fat Then Do Not Love Me At All  My Women's Rights Class Was Taken Over By a Misogynist. Your Soulmate Isn't Who You Think It Is - A Handy Guide to Interacting with Mixed Attractiveness Couples - Health. I Screwed Up Three Friendships Because I Was Bitter About Being Single.

Stop au processus d’auto-victimisation. La victimisation personnelle : une maladie du 21ème siècle ? Check Your Privilege. Things That Weigh 20 Pounds: A Baby, a Dog and Each of These Breasts. 6 Ways to Reconcile Your Eating Disorder with Your Feminism. What’s Wrong With ‘All Lives Matter’? This Is the Most Shameful Evidence of What a Nightmare Wife I Was in My Twenties. Study Suggests Men And Women May View Cheating Very Differently. Ellen et William Craft. Ellen Craft, the Slave Who Posed as a Master and Made Herself Free. Laura Bates: #EverydaySexism - Yoko Ono's Meltdown. Incredible All-Woman Showtime Panel Drops Truth Bombs About TV Sex. Can Connecticut Force A Teenage Girl To Undergo Chemotherapy? Forcing Chemo on a 17-Year Old Is Deadly, Research Reveals. Cassandra C. tells her story of being forced to get treatment for cancer. Caring in the City. Straight Women, Gay Men Are Friends, Not Accessories  Le voile, un symbole de 3.000 ans de machisme religieux.

2015 Could Be The Year Of Male Birth Control. Untitled. On Nerd Entitlement. The Fat Woman breaking point. So You Want to Be a Male Feminist? Here Are 11 Simple Rules to Follow. LATEST NOH8 PHOTOGRAPH: A STAND AGAINST PUBLIC BREAST-FEEDING DISCRIMINATION. I Smiled at Everyone I Saw for an Entire Day and It Was Awful. Changing the World, One Word at a Time! How Stereotypes About What Queer Women Look Like Erases Femmes. 7 Clues the Man You Love is a Bad-Ass Wizard » BAD WITCHES. Petit guide pour éviter le sexisme ordinaire sur Facebook. Beth Breslaw Conducts 'Manslamming' Experiment, Recounts Feeling 'Invisible' When People Get Weird About Feminism, Just Show Them These Drawings. The untold story of how a culture of shame perpetuates abuse. I know, I was a victim. Les dégâts invisibilisés des inégalités sociales et des discriminations sexistes et racistes. Sapiosexuality Is the New Online Dating Buzzword and It Annoys the Everloving Crap Out of Me.