Are Bloggers more Influential than Celebrities : Harper's BAZAAR. It could be said that we’ve all been there, scrolling through blogger's immaculate social media feeds, plucking out outfit inspo and wondering how they make their lives look so enviously perfect. 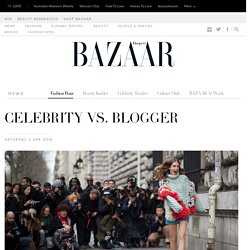 Time and time again bloggers are proving to the world that they have more to offer than standing next to textured walls and taking pretty pictures. We’ve shown you how these influencers have wielded their social media accounts to rake in significant amounts of money for social posts and changed the blogging game by attracting the masses and forming sustainable business models. In a recent survey by Collective Bias, results showed that the world of blogging is still a force to be reckoned with. It was found that when it comes to product endorsements digital influencers are more popular than celebrities. So yup, the blogging empire is here to stay. Chiara Ferragni: world's most successful fashion blogger on playing 'the game', building a brand and making millions from shoes. Vogue editors take aim at 'pathetic' bloggers who sit front row at Fashion Week. There's a rivalry in the fashion world that seems to be reaching a boiling point, and we're not talking Stephanie Seymour verus Kendall Jenner and Gigi Hadid. 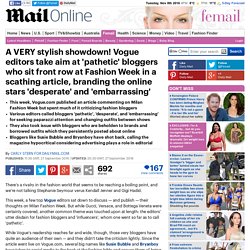 This week, a few top Vogue editors sat down to discuss — and publish — their thoughts on Milan Fashion Week. But while Gucci, Versace, and Bottega Veneta were certainly covered, another common theme was touched upon at length: the editors' utter disdain for fashion bloggers and 'influencers', whom one went so far as to call 'pathetic'. While Vogue's readership reaches far and wide, though, those very bloggers have quite an audience of their own — and they didn't take the criticism lightly.

Since the article went live on Vogue.com, several big names like Susie Bubble and Bryanboy have taken to social media to fire back at the fashion bible and accuse them of being a bit hypocritical. Scroll down for video Oh snap! Whoops! Irritating? Luxury Daily. Since fashion bloggers arrived on the scene about a decade ago, they have gained influence and grown to be leaders in the industry, says a new report by Fashionbi. 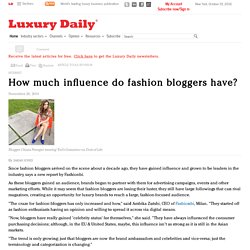 As these bloggers gained an audience, brands began to partner with them for advertising campaigns, events and other marketing efforts. While it may seem that fashion bloggers are losing their luster, they still have large followings that can rival magazines, creating an opportunity for luxury brands to reach a large, fashion-focused audience. "The craze for fashion bloggers has only increased and how," said Ambika Zutshi, CEO of Fashionbi, Milan. "They started off as fashion enthusiasts having an opinion and willing to spread it across via digital means. "Now, bloggers have really gained 'celebrity status' for themselves," she said. "The trend is only growing; just that bloggers are now the brand ambassadors and celebrities and vice-versa; just the terminology and categorization is changing. " Dolce & Gabbana Light Blue effort. Login to Mintel Reports - Mintel Group Ltd.

Are Bloggers more Influential than Celebrities : Harper's BAZAAR. Bloggers and digital influencers are reshaping the fashion and beauty landscape. In early June, Arielle Charnas of Something Navy posted about the Peter Thomas Roth Rose Stem Cell Bio-Repair Gel Mask on her Snapchat story. 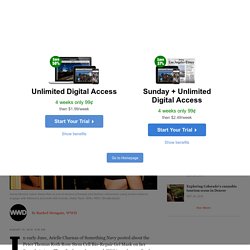 Then the frenzy happened: Within 24 hours after her story went live, the post was responsible for the sale of 502 masks, or $17,565 worth of product. Do the math: that’s equal to $123,000 in sales in a week, $527,000 in a month or almost $6.4 million in a year. Nor was that a one-off. An Yves Saint Laurent Mascara Volume Effet Faux Cils Shocking in Deep Black that Charnas snapped about in July moved 422 units in 24 hours, driving $13,500 in sales. That means she could sell $95,000 worth of mascara in a week, $405,000 in a month or $4.9 million in a year. It’s not only beauty she has that impact on. Last week, Charnas hosted a public appearance at activewear retailer Bandier in New York’s Flatiron District to toast her collaboration with Koral: Something Navy x Koral.

What fashion or beauty editor can draw that kind of crowd?