Hot Fashion Bloggers. It’s not just the collections that people wait to see during the marathon of fashion weeks, but also the comments and feedback from bloggers who, in the eyes of many, have become as relevant as the shows that they blog about. 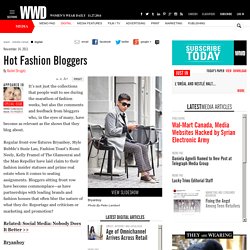 Regular front-row fixtures Bryanboy, Style Bubble’s Susie Lau, Fashion Toast’s Rumi Neely, Kelly Framel of The Glamourai and the Man Repeller have laid claim to their fashion insider statuses and prime real estate when it comes to seating assignments. Bloggers sitting front row have become commonplace—as have partnerships with leading brands and fashion houses that often blur the nature of what they do: Reportage and criticism or marketing and promotion?

Related: Social Media: Nobody Does It Better >> Bryanboy POINT OF VIEW: “My point of view is extremely personal and intimate. PAGE VIEWS: Averages about 1.4 million page views a month. TRAINING: No formal training in journalism, and has never held a previous job. Www.londonfashionweek.co.uk/uploads/media/28/16466.pdf. The rise of the power blogger. In her Bleecker Street apartment, Danielle Bernstein is putting on her signature denim overalls and curling up on a couch. 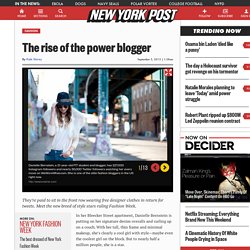 With her tall, thin frame and minimal makeup, she’s clearly a cool girl with style—maybe even the coolest girl on the block. But to nearly half a million people, she is a star. At the Lollapalooza music festival last month, she says, she was mobbed by people every 100 yards or so, asking if they could take her photo. At one point, she says, a group of wide-eyed young girls began gasping and pointing when she walked by. “It’s Danielle!” Bernstein isn’t a rock singer, an actress or even a reality TV personality. But with 227,000 Instagram followers and nearly 30,000 Twitter followers watching her every move on weworewhat.com, she is one of the elite fashion bloggers in the US right now— with a fabulous lifestyle to match. Modal Trigger Leandra Medine, Bryan Grey Yambao and Rumi Neely. have a combined nearly 700,000 Twittter followers.Photo: Getty “Are bloggers important? Bloggers carry growing fashion industry influence. NEW YORK (Reuters) - New York Fashion Week has long been the realm of magazine editors and department store buyers, but now a growing number of online fashionistas are wielding some unlikely industry influence. 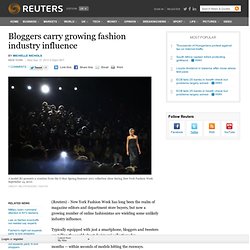 Typically equipped with just a smartphone, bloggers and tweeters are telling the world about designers' collections for spring/summer 2011 -- which won't be for sale in stores for months -- within seconds of models hitting the runways. Online media at fashion week has grown 20 percent in the past six months, said organizer IMG, and now accounts for about 40 percent of the 3,600 members of the press covering the event. They also follow fashion trends outside the invitation-only venues. "We do pay attention to it ... It's important to be aware of what they are blogging about and what's inspiring them," said Colleen Sherin, Saks Fifth Avenue fashion market director. "There are a handful of bloggers that should be at shows, but the front row is a different matter all together. How Fashion Bloggers Gain Access to NY Fashion Week. Yuli Ziv is the founder & CEO of Style Coalition, a network of top fashion and beauty bloggers in partnership with Elle. 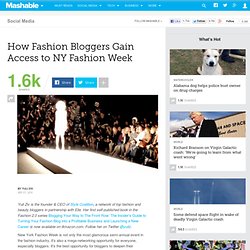 Her first self-published book in the Fashion 2.0 series Blogging Your Way to The Front Row: The Insider's Guide to Turning Your Fashion Blog into a Profitable Business and Launching a New Career is now available on Amazon.com. Follow her on Twitter @yuliz. London Fashion Week - News. Back to news list 12 September 2014 The purpose of the British Fashion Council’s digital pillar is to support the British fashion industry to become the world leader in creativity, business and innovation. 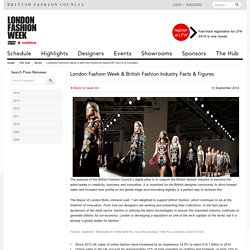 It is important for the British designer community to drive forward sales and increase their profile on the global stage and innovating digitally is a perfect way to achieve this. The Mayor of London Boris Johnson said: 'I am delighted to support British fashion, which continues to be at the forefront of innovation. From how our designers are working and presenting their collections, to the fast paced dynamism of the retail sector, fashion is utilising the latest technologies to ensure this important industry continues to generate billions for our economy. #BBCTrending: Fashion Week trends, charted. 20 September 2014Last updated at 19:35 ET By BBC Trending What's popular and why A Tweet sent from by Calvin Klein was the most reposted during Fashion Week The clothes may have been the main draw, but it was an undressed Justin Bieber who helped catapult Calvin Klein to the top of the social media heap at New York Fashion Week. 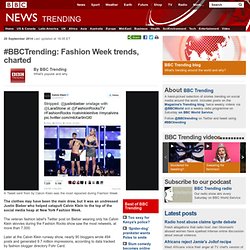 The veteran fashion label's Twitter post on Bieber wearing only his Calvin Klein skivvies during the Fashion Rocks show saw the most retweets, at more than 7,000. The impact of fashion bloggers: The global rise of the fashion social Influencer. By Tim Gibbon We've known for quite some time that like many other industries, the fashion sector is enriched by influencers and the impact that opinions can have upon others. 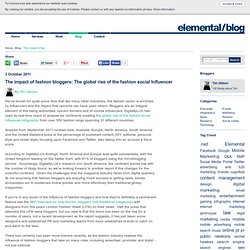 Bloggers are an integral element of this being authorities, opinion formers and of course influencers. DigitallyLUX has used its real-time reach to analyse six continents creating the global rise of the fashion social Influencer infographic from over 550 fashion blogs spanning 31 different countries. Analysis from September 2011 reviews Asia, Australia, Europe, North America, South America and the United Statistics looks at the percentage of published content (DIY, editorial, personal style and street style) focusing upon Facebook and Twitter, also taking into an account a Klout score.