Boston Dynamics: Dedicated to the Science and Art of How Things Move. 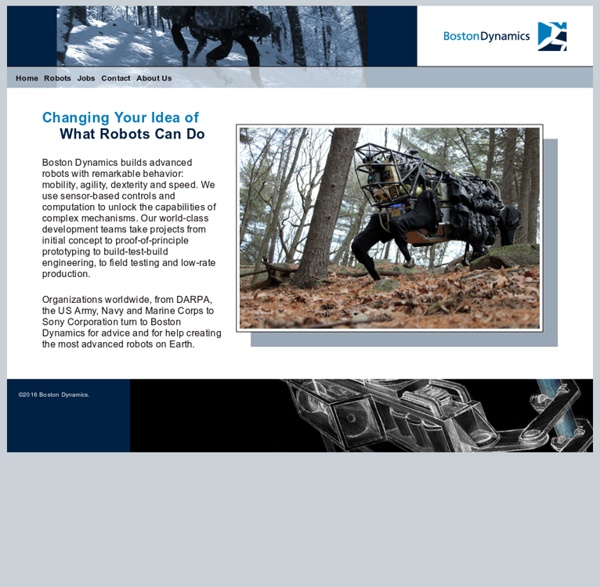 Changing Your Idea of What Robots Can Do Boston Dynamics builds advanced robots with remarkable behavior: mobility, agility, dexterity and speed. We use sensor-based controls and computation to unlock the capabilities of complex mechanisms. Our world-class development teams take projects from initial concept to proof-of-principle prototyping to build-test-build engineering, to field testing and low-rate production. Organizations worldwide, from DARPA, the US Army, Navy and Marine Corps to Sony Corporation turn to Boston Dynamics for advice and for help creating the most advanced robots on Earth.

Google vs. Death In person, it can be a little hard to hear Larry Page. That’s because he has nerve damage in both vocal cords: one was paralyzed about 14 years ago, the other left with limited movement after a cold last summer. This rare condition doesn’t slow him down, though it has made his voice raspy and faint. You have to listen carefully. But it’s generally worth it. Page, 40, is the co-founder and CEO of one of the most successful, ubiquitous and increasingly strange companies on the planet. MegaBots Inc - YouTube MegaBots Season 1 Trailer 295,532 views 1 month ago Team USA is BACK and it's getting ready to take on Team Japan in the world's first Giant Robot Duel! Team Mojavaton Mojavaton consists of 6 team members that worked on the design and construction of the robot hardware. The remaining 14 members worked on the software. Developing a Robot for DRC: Use a quadruped robot.

Robotics - Lockheed Martin In the field of robotics, opportunity is endless and discovery is ongoing. Our robotic innovations could represent the answer to any number of challenges – from disaster response to deep space exploration. Whether it’s traversing inhospitable environments or avoiding man-made threats, the robotic advances we’re pioneering have the potential to keep soldiers and citizens connected in the safest way possible – with real-time data, information and imagery. Our goal is to keep soldiers and citizens safe. As a first-responder, the Atlas robot could work tirelessly to provide vital support in the aftermath of disaster as well as collect and provide real-time data for emergency crews. Our K-Max unmanned helicopter replaces vulnerable convoys by delivering supplies to troops deployed on the front lines of combat.

MIT Early on, we organized across system aspects: perception, interface, planning & control, network, infrastructure. Now that the Trials are imminent, we are organized around the individual tasks that Atlas must perform. Involvement in Prior DARPA Challenges: Some of our members competed in the 2006-7 DARPA Urban Challenge to develop a self-driving vehicle. Other Interesting Items of Note about the Team: Tactically Expandable Maritime Platform (TEMP) During natural or manmade disasters, the U.S. armed forces, with rapidly deployable sealift, airlift, logistics, and medical care capabilities, may be called to supplement lead agencies or organizations providing humanitarian assistance and disaster relief support. The goal of DARPA’s Tactically Expandable Maritime Platform (TEMP) program is to investigate and develop modular technologies and modular systems that leverage globally used International Organization for Standardization (ISO) shipping containers. The vision is to enable humanitarian assistance and disaster relief over broad coastal areas without dependence on local infrastructure, using unmodified commercial containerships, thus freeing military ships to carry out other military missions.

Tartan Rescue Carnegie Mellon University-NREC is developing the CHIMP (CMU Highly Intelligent Mobile Platform) robot for executing complex tasks in dangerous, degraded, human-engineered environments. CHIMP will have near-human form factor, work-envelope, strength and dexterity to work effectively in such environments, yet avoid the need for complex control by maintaining static rather than dynamic stability. We faced the difficult challenge of designing and building the robot at the same time that we developed the software.

Google's project to 'cure death,' Calico, announces $1.5 billion research center The Google-backed life-extension company, Calico, announced today that it was partnering with Chicago-based pharmaceutical giant AbbVie to develop and bring to market new drugs targeting diseases associated with old age. Each partner has committed to providing $250 million in funding with the option to each add another $500 million to the project. The money will be used to create a new research center in San Francisco, where Calico will hire a team of researchers to discover new drugs and guide early development. AbbVie will focus more on the clinical trials, late-stage development, and bringing promising new drugs to market. RoboSimian Jet Propulsion Labs is building RoboSimian, a simian-inspired, limbed robot that will use deliberate and stable operations to complete challenging tasks under supervised teleoperation. The team will employ design methods, system elements and software algorithms that have already been successfully demonstrated in JPL’s existing robots. RoboSimian will use its four general-purpose limbs and hands, capable of both mobility and manipulation, to achieve passively stable stances, create multi-point anchored connections to supports such as ladders, railings and stair treads, and brace itself during forceful manipulation operations. Because the physical robot is being developed in parallel with the software to run it, the hardware and software teams have been largely running in parallel as well.