In Germany, Syrians find mosques too conservative. The death and life of the great British pub. The Murphy family, John, Mary and their adult son Dave, were preparing to spend a 33rd Christmas as landlords of the Golden Lion pub in Camden, north London when they heard the rumours. 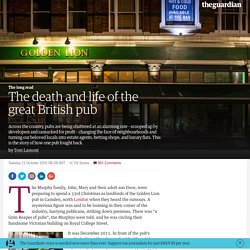 A mysterious figure was said to be looming in their corner of the industry, harrying publicans, striking down premises. There was “a Grim Reaper of pubs”, the Murphys were told, and he was circling their handsome Victorian building on Royal College Street. It was December 2011. How Bollywood Shuts Its Doors on the Poor - The Caravan. EVERY SUNDAY, KIRTI JADAV leaves her house in Bhiwandi, a far-flung suburb of Mumbai, at around nine in the morning. 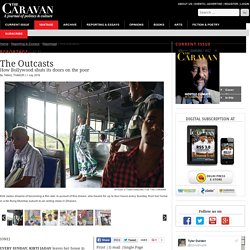 She walks for ten minutes and boards a bus, which, in an hour and a half, brings her to Vasai Road station. From there, she takes the Mumbai local train, which reaches Dadar in an hour. At Dadar, she boards another train, and in around 20 minutes arrives at Sion. Jadav then walks for another 20 minutes to reach the famous slum of Dharavi, located in central Mumbai. Your guide to India’s most unique antique finds. Furniture displayed in one of the alleys of New Delhi’s Amar Chand furniture market. 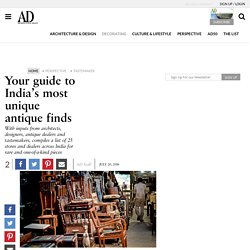 How Indian Soap Operas are Edited for an Afghan Audience - The Caravan. In April 2015, when the Indian soap opera Banoo Main Teri Dulhann—“I Will Be Your Bride”—appeared on Ariana TV, a channel in Afghanistan, something was amiss. 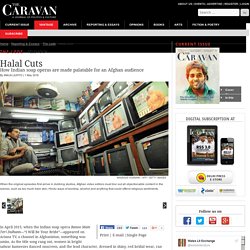 As the title song rang out, women in bright salwar kameezes danced onscreen, and the lead character, dressed in shiny, red bridal wear, ran into the arms of her lover. The characters spoke Pashto, and “Ram” had been changed to “khuda.” In a barren land, an epidemic of hysterectomies. Featured Articles. The Thai Craze of Luk Thep, or ‘Child Angels’ In Bangkok, a plastic-baby boom is under way. 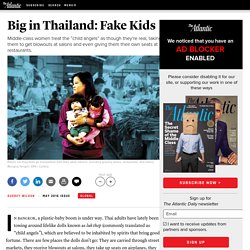 Thai adults have lately been towing around lifelike dolls known as luk thep (commonly translated as “child angels”), which are believed to be inhabited by spirits that bring good fortune. There are few places the dolls don’t go: They are carried through street markets, they receive blowouts at salons, they take up seats on airplanes, they are even served restaurant meals. At first glance, the dolls—which seem to be most popular among middle-class, middle-age women—might appear to reflect Thailand’s low fertility rate (which has plummeted in recent decades from six children per woman to 1.5 today, a rate below that of most neighboring countries).

Yet close observers say the luk thep craze is more strongly connected to Thailand’s complex religiosity. Although nearly 95 percent of Thais practice Buddhism, many also make offerings to Hindu gods, and the country has a long tradition of object worship, thought to have roots in animism. Is Singapore A Racist Country? — Iwani. This is a question I get asked occasionally when I am back home, and something I have questioned and pondered upon for ages. 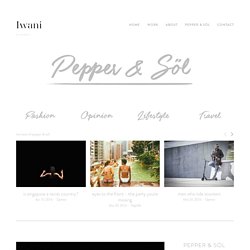 It's not always easy to talk to my Singaporean friends about this because they, as we all do with our own respective countries, can never truly see things from the eyes of an outsider. No matter how well meaning or open-minded we may be, it is difficult to accept that that which we hold sacred and dear may be flawed. Almost every discussion I have ultimately ends in a dismissive acknowledgement because, even though we may criticise our own countries, we will always get protective when someone else does the same. Does this mean my article is going to be a criticism? America’s Quiet Crackdown On Indian Immigrants. Building the First Slavery Museum in America. The Great Melting: cities are becoming less segregated. What the Führer means for Germans today. Tradition: Same-Sex Marriage and Hinduism - Magazine Web Edition > January/February/March 2016. Examining lesbian, gay, bisexual and transgender issues within the Hindu faith Changing times: Two women are married in a Hindu wedding ceremony FROM THE STONEWALL RIOTS IN NEW YORK back in 1969 to the recent legalization of same-sex marriages, lesbian, gay, bisexual and transgender (LGBT) issues have been central in discussions about civil rights and harassment in the Western world. 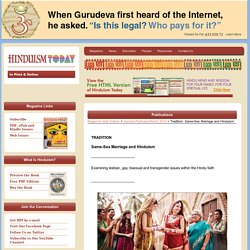 This dialogue has forced individuals, organizations and governments to question their values and beliefs. Many religious organizations have turned to their scriptures, their followers and their spiritual traditions for guidance on how they should respond. Well-known spiritual leaders from various faiths have stepped forward to present the views of their respective belief system, but there has been relative silence from the “movers-and-shakers” of the Hindu faith. LGBT History in India Prior to the 19th century, historical sources that specifically refer to LGBT lives and lifestyles are relatively scarce. 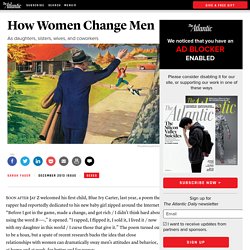 “Before I got in the game, made a change, and got rich / I didn’t think hard about using the word B----,” it opened. “I rapped, I flipped it, I sold it, I lived it / now with my daughter in this world / I curse those that give it.” The poem turned out to be a hoax, but a spate of recent research backs the idea that close relationships with women can dramatically sway men’s attitudes and behavior, at home and at work, for better and for worse: Male CEOs typically pay their employees less and themselves more after having sons, but this trend doesn’t hold with daughters. In fact, male CEOs with firstborn daughters actually pay their employees more, giving female employees the biggest raises [1]. Men with stay-at-home wives likewise favor a traditional division of labor. The Studies: Shades of grey: How India is both a tolerant and an intolerant society.

Back in August, I read a heart-warming piece by a Jewish Indian named Nathaniel Jhirad that celebrated India’s ecumenism and religious diversity. 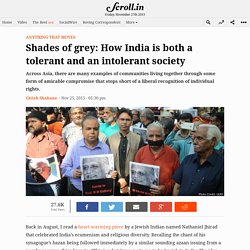 Recalling the chant of his synagogue’s hazan being followed immediately by a similar sounding azaan issuing from a nearby mosque, Jhirad wrote, “This is what it means to me to be Jewish in India: The idea that multiple faiths can peacefully intermingle not only doesn’t shock us, as it does for some in the West ‒ it’s actually taken for granted. " The comments on the essay from non-Indians ranged from sceptical to scathing. Successful parenting without spending money: a mother's story. Neither am I another self-appointed expert on other people’s parenting techniques. 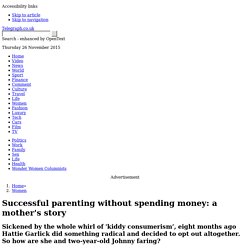 I’m just a working mother with limited time, patience and funds. This became critical three days before last Christmas when I was made redundant. It was terrifying. Patheos. Thank you for your interest in Patheos newsletters! Please enter your email address below and click the "Subscribe" button. Thank you for your subscription. You can visit your Preference Center to complete your profile and see what else we have to offer.

We apologize, we were unable to complete your subscription at this time, please try again later. If this error persists please contact us at communications@patheos.com. The Dissent of All India Bakchod. It is 26 October, a big day for All India Bakchod (AIB), the comedy collective which is recording its first television gig, On Air with AIB, a news comedy show produced by Star TV. AIB has never done television before; nor has it done news comedy. Conversion via Twitter. On December 1, 2009, to commemorate World AIDS Day, Twitter announced a promotion: if users employed the hashtag #red, their tweets would appear highlighted in red. Megan Phelps-Roper, a twenty-three-year-old legal assistant, seized the opportunity. “Thank God for AIDS!”

She tweeted that morning. Are they the world’s most relaxed moms? What we can all learn from the Dutch. By Mihal Greener November 5 Why are Dutch kids so happy? India loses 3 million girls in infanticide: The Hindu - Mobile edition. In an alarming trend, girl child numbers in India have shown a sharper decline than the male children in the decade beginning 2001, leading to a skewed child sex ratio. On the eve of the International Day of the Girl Child, government on Tuesday said that while the decade saw an overall drop in share of children to total population, nearly three million girls, one million more than boys, are “missing” in 2011 compared to 2001 and there are now 48 fewer girls per 1,000 boys than there were in 1981.

“During 2001- 2011, the share of children to total population has declined and the decline was sharper for female children than male children in the age group 0—6 years,” said the study “Children in India 2012- A Statistical Appraisal” conducted by the Central Statistical Organisation. “Though, the overall sex ratio of the country is showing a trend of improvement, the child sex ratio is showing a declining trend, which is a matter of concern,” the study said. The evolution of music: How genres rise and fall over time. Essena O’Neill, Instagram Star, Recaptions Her Life. Student President Writes Scathing Letter To Her School For Criticising Her Skirt Length. Posted on October 29 2015 at 17:29 pm The Student Body President at Beaufort High School in South Carolina is seemingly mounting a mutiny against her education institution.

Overall, Asian Americans are more educated: More than half of Asian Americans (51.5%) have a bachelor's degree or higher compared to 30% of the general U.S. population And they earn a lot more: $74,105 in median income versus $53,657, according to Census Bureau's 2014 American Community Survey. But behind the numbers is another story. "When you dig a little bit it shows that we are not all doing as well as society, the government and other institutions would lead you to believe," said Christopher Kang, the national director of the National Council of Asian Pacific Americans.

"We do have a very diverse population and very diverse needs. " Asking "Why are Asian-Americans so successful in America" is "uninformed" and "perpetuates stereotypes," Kang wrote. I grew up in Pablo Escobar’s Colombia. Here’s what it was really like.