Introduction. Next: 3D from images Up: Visual 3D Modeling from Previous: Contents Contents In recent years computer graphics has made tremendous progress in visualizing 3D models. 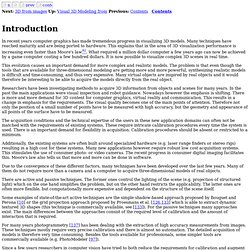 Many techniques have reached maturity and are being ported to hardware. This explains that in the area of 3D visualization performance is increasing even faster than Moore's lawA1. What required a million dollar computer a few years ago can now be achieved by a game computer costing a few hundred dollars. It is now possible to visualize complex 3D scenes in real time. This evolution causes an important demand for more complex and realistic models. Professur für Photogrammetrie - Image Matching / Structure from Motion (SfM) Turning Mobile Phones into 3D Scanners. 2 Nikon D90 cameras, 3D portraits. Alex Fry and Jamie Nimmo will have a 3D photography exhibition "Stereo Portrait Project" in Sydney Australia on 27th May (scroll down for the full press release). 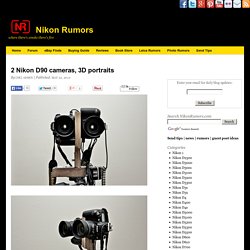 Here is the technical background: For the Stereo Portrait Project, we used off the shelf hardware and software, from the cameras, lighting, triggering, post production to the printing of the book. We shot using Nikon d90's with shutter cables connected to an RF trigger. The Lighting system was three Nikon sb900's, one connected via pc sync in a soft box, the other two optically slaved. A custom camera rig was needed to put the cameras as close together as possible, roughly emulating the distance between the human eyes. To synchronize the cameras we used an RF trigger split out to two preload shutter release cables. The image pairs were then sorted using Aperture before being exported into Nuke, where final tweaks were made before combining them into the final Anagylphic 3D images. 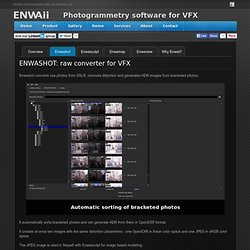 Automatic sorting of bracketed photos Select the images to convert Distortion removal and HDR generation via OpenEXR Multi directories conversion, select and forget Convert hundred of raw photos at once It automatically sorts bracketed photos and can generate HDR from them in OpenEXR format. It creates at once two images with the same distortion parameters : one OpenEXR in linear color space and one JPEG in sRGB color space. The JPEG image is used in Maya® with Enwasculpt for image based modeling. Enwaii photogrammetry for VFX : Making of Smurfs 2. Plug Effects' photogrammetry masterpiece for Smurfs 2 We are delighted to present this masterpiece of photogrammetry achieved by the artists at Plug Effects. 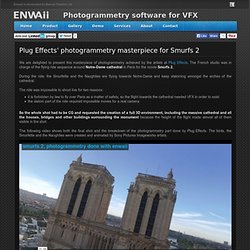 The French studio was in charge of the flying ride sequence around Notre-Dame cathedral in Paris for the movie Smurfs 2. During the ride, the Smurfette and the Naughties are flying towards Notre-Dame and keep slaloming amongst the arches of the cathedral. The ride was impossible to shoot live for two reasons: it is forbidden by law to fly over Paris as a matter of safety, so the flight towards the cathedral needed VFX in order to exist the slalom part of the ride required impossible moves for a real camera So the whole shot had to be CG and requested the creation of a full 3D environment, including the massive cathedral and all the houses, bridges and other buildings surrounding the monument because the height of the flight made almost all of them visible in the shot. 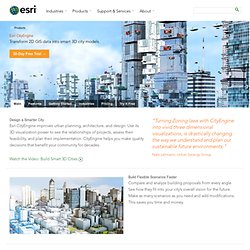 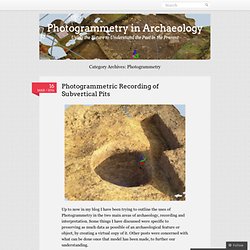 As far as its potentials go though, there is still a lot of research to be done, in order to assess the uses that this technology has, but also the limits that we will have to deal with on a day to day basis. One of the aspects that has always interested me is a question of scale. We’ve seen before that Photogrammetry deals well with anything ranging from an arrowhead to a small trench (4×6 is the maximum I have managed before, but there is much larger stuff out there). Smaller objects are hard to do cheaply, as the right lenses become essential, but larger stuff should be entirely possible to do with the right considerations in mind. The results can be viewed here: Autodesk 123D Catch. Photogrammetry plugin for Rhino. Open Source Photogrammetry. Matterport 3D models of real interior spaces.

PhotoSpace: A Vision Based Approach for Digitizing Props. Photogrammetrie und Computer Vision. Infinite-Realities. SURE. Introduction SURE is a software solution for multi-view stereo, which enables the derivation of dense point clouds from a given set of images and its orientations. 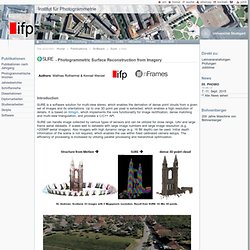 Up to one 3D point per pixel is extracted, which enables a high resolution of details. It is based on libtsgm, which implements the core functionality for image rectification, dense matching and multi-view triangulation, and provides a C/C++ API. SURE can handle image collected by various types of sensors and can be utilized for close range, UAV and large frame aerial datasets. It scales well to datasets with large image numbers and large image resolution (e.g. >200MP aerial imagery). The input of SURE is a set of images and the corresponding interior and exterior orientations. Documents. Products. Visual 3D Modeling from Images. 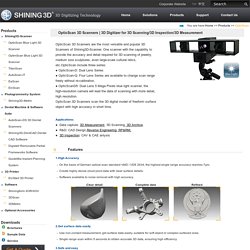 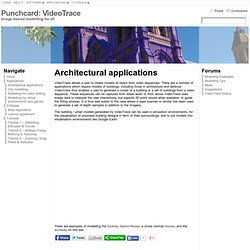 There are a number of applications which require models of buildings, including those in architecture and defence. VideoTrace thus enables a user to generate a model of a building or a set of buildings from a video sequence. These sequences can be captured from street level, or from above.VideoTrace uses image data to interpret the user interactions, but exploits 3D point clouds when available, to guide the fitting process. It is thus well suited to the case where a laser scanner or similar has been used to generate a set of depth samples in addition to the imagery. The building / urban models generated by VideoTrace can be used in simulation environments, for the visualisation of proposed building designs in term of their surroundings, and to put models into visualisation environments like Google Earth.

There are examples of modelling the Sydney Opera House, a (more normal) house, and the archway on this site. Punchcard: VideoTrace. Match Photo: Modeling from photos. Creating a 3D model to match a photo Use the matching process to create a 3D model to match one or more photos of a building or structure. 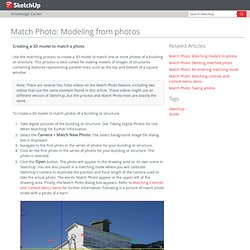 This process is best suited for making models of images of structures containing features representing parallel lines, such as the top and bottom of a square window. Note: There are several You Tube videos on the Match Photo feature, including two videos that use the same example found in this article. These videos might use an different version of SketchUp, but the process and Match Photo tools are exactly the same. Match Photo: Introduction.

Match Photo introduction Use the Match New Photo and Edit Matched Photo menu items to create a 3D model to match a photo or to match an existing 3D model to a photo's context. Activate the Match New Photo and Edit Matched Photo menu items from the Camera menu. SketchUp is commonly used to create designs of buildings or structures. 3DF Zephyr Evaluation Download Page - 3Dflow. Photogrammetry. Photogrammetry is an estimative scientific method that aims at recovering the exact positions and motion pathways of designated reference points located on any moving object, on its components and in the immediately adjacent environment. Photogrammetry employs high-speed imaging and the accurate methods of remote sensing in order to detect, measure and record complex 2-D and 3-D motion fields (see also SONAR, RADAR, LiDAR etc.).

Photogrammetry feeds the measurements from remote sensing and the results of imagery analysis into computational models in an attempt to successively estimate, with increasing accuracy, the actual, 3-D relative motions within the researched field. Its applications include satellite tracking of the relative positioning alterations in all Earth environments (e.g. tectonic motions etc), the research on the swimming of fish, of bird or insect flight, other relative motion processes (International Society for Photogrammetry and Remote Sensing). StereoScan. Agisoft StereoScan is an easy to use 3D modeling tool for automatic generation of textured 3D models from individual stereo pairs. The stereo pairs are not required to be calibrated or aligned, and can be captured by hand from any generic positions.

For more information about these examples, refer to the "Data Processing Examples" Appendix in the Stereo Pipeline User's Guide. HiRISE Columbia Hills (Crop) HiRISE observations PSP_001513_1655 and PSP_001777_1650 are on the foor of Gusev Crater and cover the area where the MER Spirit landed and has roved, including the Columbia Hills. Mementify - WebDLT. About PHOV. ARC 3D Webservice.

In part two, I’ll flesh out more VFX-centric application of this workflow. Before I start, big thanks to: Dan Short: for showing me his awesome 123d models that sparked this whole ideaHannah Davis: debugging + emotional support + snacks So a few weeks ago, Dan Short showed me 123D Catch. It was awesome. SynthEyes Camera Tracker - Andersson Technologies LLC. StereoScan. The Art of Photogrammetry: Introduction to Software and Hardware. Our brains perceive depth by comparing the images that our eyes see.

If you alternatively close each of your eyes, you will notice that the object you see will seem to shift left and right. An object that is closer, will seem to shift more than an object that is farther away. Sensor Fusion. We propose an automatic procedure for combining digital images and laser scanner data in order to have a full representation of a scene. Sensors & Systems - 3D Laser Mapping Offers Innovative Visualisation Software. Details. Sensors & Systems. Using the GoPro Hero 3 for 3D Photogrammetry Modeling and Measuring. Free photogrammetric digital reconstruction.