3v Geodesic dome calculator. Enter the radius of the dome, then click the calculate button. 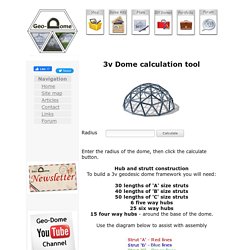 Click here to see all dome calulation tools. Sewed own popup dome-home for need, been selling them since. Strategic Relocation The Film FULL VERSION HQ (Alex Jones) Cell 411. VERSCHIL - EAU D'ORANGE - Plantaardig parfum vrij van synthetische geurstoffen. Brilliant Yurt Design! - Mixing Tradition with Super Modern Construction. DIY How To Build an Earthship Greenhouse. Log cabin simplicity: recrafting pioneer tiny homes in corn Iowa. Tapping the Birch - Traditional Way. Just another WordPress site. A Survival Q & A: Living Through SHTF In the Middle of A War Zone. Several readers alerted us to a forum thread at Survivalist Boards that centered around an individual named Selco who spent several years in a city setting during the complete collapse of Bosnia circa 1992. 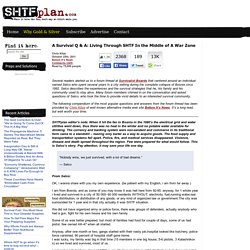 Selco describes the experiences and the survival strategies that he, his family and his community used to stay alive. Many forum members chimed in on the conversation and asked questions of Selco, who took the time to provide vivid details to an interested survival community. The following compendium of the most popular questions and answers from the forum thread has been provided by Chris Kitze of well known alternative media web site Before It’s News. Small batch gin production – a photo essay. Coalition of Automated Legal Applications. This Working Group will consider the challenges and opportunities provided by Ethereum and Distributed Autonomous Organisations (DAOs). 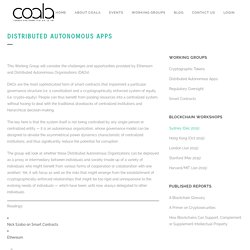 DAOs are the most sophisticated form of smart contracts that implement a particular governance structure (i.e. a constitution) and a cryptographically enforced system of equity (i.e. crypto-equity). People can thus benefit from pooling resources into a centralized system, without having to deal with the traditional drawbacks of centralized institutions and hierarchical decision-making. TREZOR: The Bitcoin Safe. Super Useful Knot - How To Tie A Constrictor Knot. Sharpening a Crosscut Handsaw with Paul Sellers. Our Timber frame workshop: Masonry Heater. How to cut a Scarf Joint, Time Lapse. When Gold and Silver Go Into Hiding. Autos - Would you live in a shoebox? Greg Parham is an architect in Durango, Colorado. 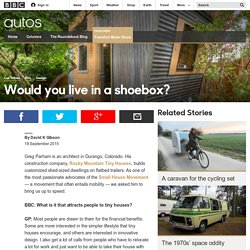 His construction company, Rocky Mountain Tiny Houses, builds customized shed-sized dwellings on flatbed trailers. As one of the most passionate advocates of the Small House Movement — a movement that often entails mobility — we asked him to bring us up to speed. BBC: What is it that attracts people to tiny houses? GP: Most people are drawn to them for the financial benefits. Some are more interested in the simpler lifestyle that tiny houses encourage, and others are interested in innovative design.

BBC: What is different about your approach? DIY home for less than $3500. How To Build A Self Watering Rain Gutter Grow System! Camping. Tiny House Concerns: Tires on the Trailers. Rocky Mountain Tiny Houses. Vinay Gupta - Resilience Guru. Artificial photosynthesis breakthrough turns CO2 emissions into plastics and biofuel. Scientists at the Lawrence Berkeley National Laboratory and the University of California, Berkeley have created a hybrid system of bacteria and semiconducting nanowires that mimics photosynthesis. 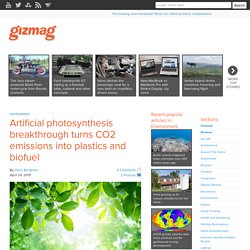 According to the researchers, their versatile, high-yield system can take water, sunlight and carbon dioxide and turn them into the building blocks of biodegradable plastics, pharmaceutical drugs and even biofuel. Although renewable energy is making up a growing portion of the world’s energy production, scientists have suggested that the current trends of CO2 buildup in our atmosphere are still likely to lead to serious consequences, and do so sooner than we had anticipated. One way to keep harmful emissions under control could be to trap the CO2 coming out of smokestacks using materials like polymers or sponges. Taking inspiration from Mother Nature, scientists have now devised a system that uses sunlight and water to convert carbon dioxide into a wide range of useful chemicals. Source: LBNL. Human Resources. A Virus Called Fear - Documentary Short Movie. 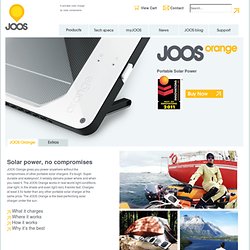 It’s tough: Super durable and waterproof, it reliably delivers power where and when you need it. The JOOS Orange works in real-world light conditions (low light, in the shade and even light rain) It works fast: Charges at least 3.5x faster than any other portable solar charger at the same price. The JOOS Orange is the best-performing solar charger under the sun. Powerful and fast JOOS Orange captures up to 20 times more energy than other solar chargers. 1 hour in the direct sun = 2 hours 3G talk time. Versatile. JOOS Orange is designed to charge all personal electronic devices (cell phones, smart phones, MP3 players, GPS devices, portable game devices, etc.) Product dimensions: 8.58” x 5.77” x 0.79” And, if you don’t get outside much, the on-board battery can be charged from your computer or any USB power source. Gas Generator. 6 Trees Every Survivalist Should Know.