Trump reaches out to North Korea in hopes of getting negotiations 'back on track' President Trump has signaled to North Korean leader Kim Jong Un his hope to resume diplomacy since negotiations over denuclearizing the Korean peninsula stalled late last year. 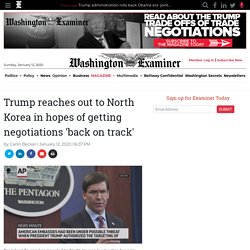 National security adviser Robert O'Brien told Axios in a report published Sunday that the Trump administration has "reached out to the North Koreans" to "talk about a range of national security challenges" after conversations between the United States and North Korea have been all but dead since October.

"We've reached out to the North Koreans and let them know that we would like to continue the negotiations in Stockholm that were last undertaken in early October," O'Brien said. "We've been letting them know, through various channels, that we would like to get those [negotiations] back on track and to implement Chairman Kim's commitment" to denuclearization. "The president suggested he send him a vase. We didn't get a vase or any other sort of Christmas gift. - A Rare Look Into The Worlds Most Secretive Country. Referred to as a “hermit kingdom”, not much is known about North Korea. 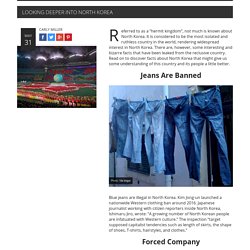 It is considered to be the most isolated and ruthless country in the world, rendering widespread interest in North Korea. There are, however, some interesting and bizarre facts that have been leaked from the reclusive country. Read on to discover facts about North Korea that might give us some understanding of this country and its people a little better. Jeans Are Banned. Kim May Have Reconsidered His ‘Christmas Gift,’ Trump Aide Says. Below is a report that DML News gives a 4 OUT OF 4 STARS trustworthiness rating. 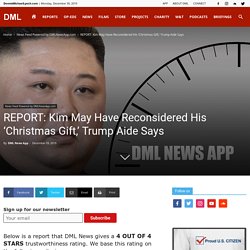 We base this rating on the following criteria: Provides named sources Reported by more than one notable outlet Does not insert opinion or leading words Includes supporting video, direct statements, or photos Click here to read more about our rating system. 'Rhetorical policy': Bolton says Trump administration is bluffing on vow to denuclearize North Korea. Former national security adviser John Bolton is questioning whether the Trump administration "really means it" when the president and other officials promise to denuclearize North Korea. 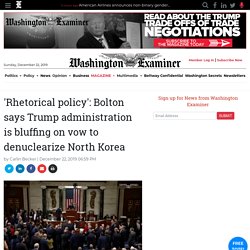 Speaking with Axios in an interview published Sunday, Bolton accused President Trump of bluffing on the vow to rid the hermit nation of nuclear weapons, saying the White House "would be pursuing a different course" if the pledge were true. "The idea that we are somehow exerting maximum pressure on North Korea is just unfortunately not true," he said, calling the Trump administration's assertion that the country cannot have nukes a "rhetorical policy. " If North Korea follows through on its promised "Christmas gift" for the United States, which some believe is a sign that the country could resume long-distance missile tests, Bolton believes the White House should do something "that would be very unusual. " According to him, administration officials should admit they were wrong and say, "We've tried. North Korean's Kim holds military meeting as tension rises under looming deadline.

As Kim Jong Un Begins Acting Up, Trump Reminds Him of US Military Might. North Korea Claims Test of 'Super-Large Multiple Rocket Launchers' KNCA reported that North Korea’s Academy of Defence Science “succeeded in another test-fire of super-large multiple rocket launchers” as part of an effort to “verify the security of launchers’ continuous fire system.” 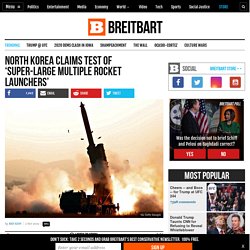 “The successful test-fire result was directly reported to the Central Committee of the Workers’ Party of Korea on the spot,” the agency reported. State newspaper Rodong Sinmun published of the multiple rocket launcher, surrounded by yellow flames and smoke. The test reportedly left communist dictator Kim Jong-un feeling satisfied. The report reads: Pyongyang’s continued testing of its nuclear weapons arsenal angered officials in Washington, with the chairman of the Senate foreign relations subcommittee on East Asia, the Pacific, and international cybersecurity policy, Sen. He said in a statement: South Korean national security adviser Chung Eui-yong played down the protests, arguing the missile launches do not pose “very grave threats.” - A Deeper Look Into North Korea. BREAKING: North Korea launches another projectile, US officials say. Sign up for our newsletter GET the DML NEWS APP (FREE) Click Here Below is a report that DML News App gives a 4 OUT OF 4 STARS trustworthiness rating. 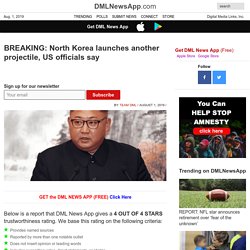 We base this rating on the following criteria: Provides named sources Reported by more than one notable outlet Does not insert opinion or leading words Includes supporting video, direct statements, or photos Click here to read more about our rating system. As the most reliable and balanced news aggregation service on the internet, DML News App offers the following information published by ABCNews.GO.com: North Korea has fired at least one projectile into the Sea of Japan, a U.S. official confirmed to ABC News. North Korean soldier defects to South Korea, makes late-night dash across DMZ: officials. A North Korean soldier crossed the Demilitarized Zone into South Korea on Wednesday hoping to defect to the South, officials said. 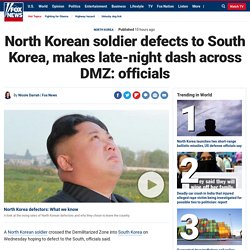 The man crossed the border that bisects the Koreas late Wednesday and was seen near the Imjin River around 11:38 p.m., South Korea's Joint Chiefs of Staff said Thursday. A South Korean soldier noticed "an unidentified object floating in the river via thermal observation devices, which was later confirmed as a person," an official said, according to the South's Yonhap News Agency. "The military then took him safely into custody in accordance with due protocol. " North Korea fired 'multiple' projectiles off east coast, South Korea reports. North Korea fired multiple unidentified projectiles off its east coast Wednesday, South Korean military officials said, just days after the secretive regime fired two short-range missiles from the same region. 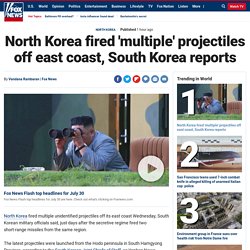 The latest projectiles were launched from the Hodo peninsula in South Hamgyong Province, according to the South Korean Joint Chiefs of Staff, as Yonhap News reported. BREAKING: North Korea's Kim Jong Un inspected 'new tactical guided weapon' GET the DML NEWS APP (FREE) Click Here Below is a report that DML News App gives a 4 OUT OF 4 STARS trustworthiness rating. 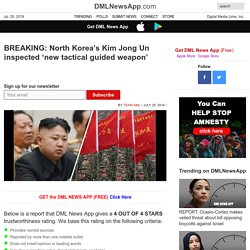 We base this rating on the following criteria: Provides named sources Reported by more than one notable outlet Does not insert opinion or leading words Includes supporting video, direct statements, or photos Click here to read more about our rating system. As the most reliable and balanced news aggregation service on the internet, DML News App offers the following information published by REUTERS.COM: North Korea fires 2 unidentified 'projectiles' resembling short-range missiles. This is a breaking news story. 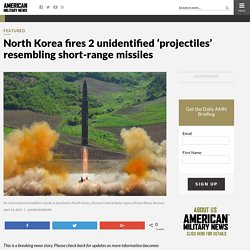 Please check back for updates as more information becomes available. North Korea has fired two short-range projectiles, South Korean officials confirmed on Wednesday. North Korea “fired one unidentified projectile at 5:34 a.m. and the other at 5:57 a.m., from Wonsan areas into the East Sea, and they flew around 430 kilometers,” South Korea’s Joint Chiefs of Staff (JCS) said in a statement, according to South Korea’s Yonhap News Agency. A U.S. defense official told CNN that upon an initial assessment, at least one unidentified “projectile” was fired, but noted that the launch is similar to North Korea’s launch of two short-range missiles in May.

A South Korean JCS official told CNN, “Our military, in preparation for additional launches, is maintaining (its) readiness posture by monitoring related movements.” The official added that the projectile was launched from the eastern coastal town of Wonsan. Kim Jong Un inspects new submarine in a bid to mount pressure on US to revive talks, report says.

North Korean leader Kim Jong Un has ordered officials to beef up the regime’s military capabilities and was photographed inspecting a newly built submarine despite the potential revival of nuclear diplomacy with the U.S. Last week, the regime said it may lift its 20-month suspension of nuclear and missile tests in protest of expected military drills between the U.S. and South Korea that Pyongyang claims are a rehearsal for the invasion. In this undated photo provided on Tuesday, July 23, 2019, by the North Korean government, North Korean leader Kim Jong Un, left, inspects a newly built submarine to be deployed soon, at an unknown location in North Korea. Tulsi Gabbard Says It’s A ‘Good Thing’ Trump Met With Kim Jong Un. Shelby Talcott on July 9, 2019 Democratic presidential candidate Tulsi Gabbard praised President Donald Trump for his meeting with North Korean Leader Kim Jong Un, but expressed frustration at his inability to make strides with the country.

Gabbard, who joined the Hawaii Army National Guard in 2003 and is an Iraq War veteran, has been vocal about her beliefs that the United States should choose isolationism. She talked about her thoughts on war in an interview with NPR. North Korea claims US is 'hell-bent' on hostility. Trump becomes first sitting US president to enter North Korea as he meets Kim Jong-un. Donald Trump has become the first sitting US president to set foot in North Korea, stepping over the demilitarised zone to shake hands with Kim Jong-un. Even after their historic meeting last summer in Singapore, Mr Trump stunned the world when he walked towards Mr Kim, shook hands and greeted him, and then stepped back across a line marking the North Korean border.

Calling it a “great day for the world”, the US president said he would invite his counterpart to the White House, and also claimed Washington and Pyongyang would resume stalled nuclear talks within weeks. We’ll tell you what’s true. You can form your own view. From 15p €0.18 $0.18 USD 0.27 a day, more exclusives, analysis and extras. Tucker says Kim Jong Un was in bad health, ‘wheezing’ while Trump dominated the scene Conservative News Today.

Fox News host Tucker Carlson was on hand when President Donald Trump met with North Korean Supreme Leader Kim Jong Un in the DMZ zone on Sunday and Carlson was struck by how unhealthy Kim appeared. Trump became the first sitting president to step foot in North Korea during a historic last-minute meeting with the dictator, and Carlson, who was just a few feet away, said President Trump “seemed to dominate” Kim, who was “wheezing like an emphysema patient.” A remarkable assessment given that Kim, who is clearly overweight, if not obese, is just 35-years-old. “Our president met with the North Korean leader, basically, with relatively few people watching,” he said during an appearance on Fox & Friends. “They kind of almost, like a movie scene, met after walking toward one another — actually to the border.”

Describing the moment when Trump and Kim came together and shook hands, Carlson explained that the leaders then returned to talk about three feet from him. North Korea Launches Missiles into East Sea, US Fires Its Own Missile Minutes Later.