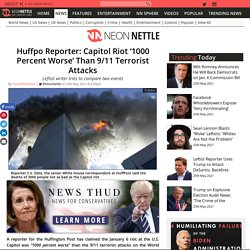 Capitol was “1000 percent worse” than the 9/11 terrorist attacks on the World Trade Center, which results in almost 3,000 people. Reporter S.V. Dáte, the senior White House correspondent at HuffPost, was responding to the Washington Examiner’s Byron York's thread, who was trying to add perspective to the left’s obsession in comparing the two events. VIDEO: Rick Santorum Says CNN Fired Him for 'Telling the Truth' Before you read this, I want to strongly urge you to sign up for my free newsletter. 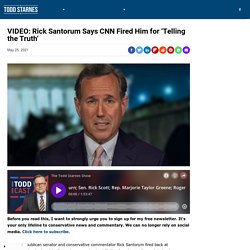 Would you be surprised to learn that Joe Scarborough used to be a Republican Congressman? 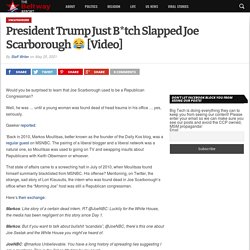 Well, he was … until a young woman was found dead of head trauma in his office … yes, seriously. Gawker reported: ‘Back in 2010, Markos Moulitsas, better known as the founder of the Daily Kos blog, was a regular guest on MSNBC. The pairing of a liberal blogger and a liberal network was a natural one, so Moulitsas was used to going on TV and swapping insults about Republicans with Keith Olbermann or whoever.

That state of affairs came to a screeching halt in July of 2010, when Moulitsas found himself summarily blacklisted from MSNBC. Trump: 'Psycho Joe Scarborough Is Rattled' President Donald Trump is not laying off of his controversial jabs at MSNBC’s "Morning Joe" co-host Joe Scarborough that allege his involvement in the death of a former staffer. 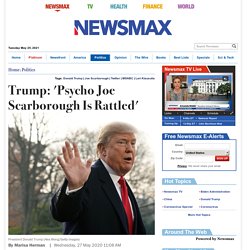 The president has repeatedly brought up an incident that involved the death of one of Scarborough’s employees when he was a Florida congressman in 2001. Lori Klausutis, 29, was found dead in a congressional office from a head injury. Her death was ruled an accident, but Trump has insinuated there is more to the story and that somehow Scarborough may have been involved. In a Wednesday morning tweet, he referenced the incident again. Joe Scarborough 'May Sue' Trump Over Murder Conspiracy Claims. MSNBC host Joe Scarborough said in a recent interview that he might sue President Donald Trump once he leaves office for repeatedly promoting a conspiracy theory that the former Florida congressman was involved in the death of his aide. 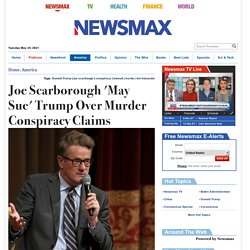 “I called lawyers after about the 10th time he accused me of murder,” Scarborough said in an interview with the Times Radio that aired on Sunday. In one instance last May, Trump tweeted: “A lot of interest in this story about Psycho Joe Scarborough. Why I am blacklisted by MSNBC. In case you were wondering why you haven't seen me on MSNBC recently, it seems that Joe Scarborough, he of the lowest rated morning show in cableland, has blackballed me. 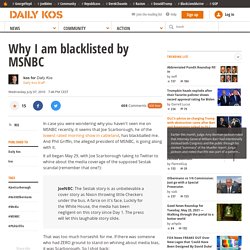 And Phil Griffin, the alleged president of MSNBC, is going along with it. It all began May 29, with Joe Scarborough taking to Twitter to whine about the media coverage of the supposed Sestak scandal (remember that one?) : JoeNBC: The Sestak story is as unbelievable a cover story as Nixon throwing little Checkers under the bus. A farce on it's face. Remember When a Dead Intern Was Found in Joe Scarborough's Office? Back in 2010, Markos Moulitsas, better known as the founder of the Daily Kos blog, was a regular guest on MSNBC. 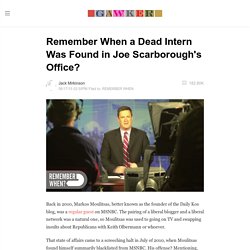 The pairing of a liberal blogger and a liberal network was a natural one, so Moulitsas was used to going on TV and swapping insults about Republicans with Keith Olbermann or whoever. That state of affairs came to a screeching halt in July of 2010, when Moulitsas found himself summarily blacklisted from MSNBC. His offense? Mentioning, on Twitter, the strange, sad story of Lori Klausutis, the intern who was found dead in Joe Scarborough’s office when the “Morning Joe” host was still a Republican congressman. Here’s their exchange: MSNBC Host Proposes 'The Most Radical of Things' to Fight Police Brutality: 'Time to Burn it Down' PMSDNC hostess Tiffany Cross has committed incitement to riot by urging people to “Burn it Down.” 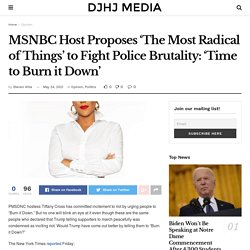 But no one will blink an eye at it even though these are the same people who declared that Trump telling supporters to march peacefully was condemned as inciting riot. Would Trump have come out better by telling them to “Burn it Down?” The New York Times reported Friday: The death of Ronald Greene after a police chase in Louisiana in 2019 is attracting new scrutiny after the publication of police body camera footage that appears to show a starkly different version of events than the one given by the Louisiana State Police.

Cross declared: Watch: Greg Gutfeld Flips Out On Juan Williams Threatens to Have Removed From Set - The Beltway Report. While talking about the Cohen hearing, Gutfeld just about lost it with Williams on a segment of Fox News’ “The Five.” 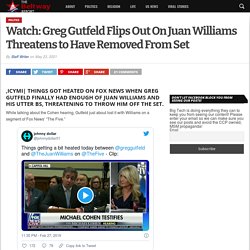 Things getting a bit heated today between @greggutfeld and @TheJuanWilliams on @TheFive – Clip: pic.twitter.com/nyf0sU76FN— johnny dollar (@johnnydollar01) February 27, 2019 “Oh, shut UP, Juan,” Gutfeld exclaimed. It gets even better! Apparently if you’re not totally against Trump, you’re “in the bunker.” QUIET PART OUT LOUD: Don Lemon, John Berman, & Brianna Keilar explain why journalism is mainly about being a Democrat. CNN’s brand of journalism is to find things that Republicans say, make a big huge deal out of it, or find people bashing republicans and make them heroes no matter how questionable their character, find bad people doing bad things and attribute their motivation to republicans, and to never correct when they’re wrong. 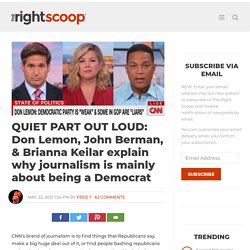 Then do it all over again. But normally they don’t say that out loud. MSNBC's Ratings Continue To Decline, FOX Returns To Top Spot In Cable News For 13 Straight Weeks * The Scoop. According to the most recent Nielsen ratings, MSNBC’s audience fell last week possible due to its intense reporting of Rep. Liz Cheney’s (R-WY) leadership vote and the Republican Party’s “civil war.” Last week, only one MSNBC show, “The Rachel Maddow Show,” made it into the top five basic cable shows, ranking in at number four. Trending: Report: Voting Machines In Pennsylvania County Rejecting Republican Ballots, Concerns Over Fold On Ballots Fox News has the remaining top five shows: “Tucker Carlson Tonight,” “The Five,” “Hannity,” and “The Ingraham Angle.”

Geraldo screams at 'punk' Dan who fires back at 'an out of control lunatic!' Hamas fired over 4,000 rockets to Israel and they use their own people as human shields. Since Israelis are more effective at defending themselves than Hamas is at attacking Israel, Geraldo wants Israel to stop fighting NOW! Terror supporter Geraldo needs to go to CNN unless Fox is trying to go for the Hamas audience to get their ratings up.

Don Lemon Tonight: Critical Race Theory ‘Is More Patriotic’ Than Patriotism. Don Lemon launched the first episode of his newly renamed CNN show with guests who claimed that “critical race theory is not anti-patriotic; in fact, it is more patriotic than those who are opposed to it.” They also likened parents who oppose teaching their children controversial and divisive race-based theories to “abusive” men who beat their wives. “The majority of people who are probably commentating on what critical race theory is, don’t have an understanding of it,” said Ashley Allison, a CNN contributor and former member of the Obama administration’s Office of Public Engagement. But “many” of “the elected officials that are pushing” patriotic and race-neutral educational laws “have an understanding of” CRT and are “afraid of it,” Allison warned.

“They use these tropes to incite chaos.” Lemon’s team of experts told CNN that CRT merely wants to include more people in the dialogue. Katie Pavlich slams Geraldo after he spews Hamas propaganda on Fox. “The fact that the United States of America is providing Israel many of the weapons Israel is using today to kill Palestinian civilians without demanding a cease-fire, Tlaib is right.

That makes us complicit in an ongoing crime against humanity,”~ Geraldo, the new Hamas spokesperson. Hamas launched over 4,000 rockets at Israel this week so Israel’s at fault??? That’s what Geraldo thinks. CNN's Cuomo: Pro-lifers don't care about science, it's just about winning over racist white voters. I know it may not seem like it, but I’ve been inclined to cut Chris Cuomo a bit of slack this year.

It’s been a rough 2021 for the CNN host. In January, the New York state attorney general announced his brother’s administration had undercounted COVID-19 deaths in New York state by up to 50 percent and began an investigation. Evidence emerged of a cover-up and, on top of that, the elder Cuomo brother faced a host of sexual misconduct allegations. This didn’t directly affect Chris Cuomo, but the journalistic ethics and optics of Andrew Cuomo’s frequent visits on his brother’s CNN show suddenly soured. Geraldo Spews Hamas Propaganda on FOX NEWS CHANNEL!

Jim Acosta is still trying to relive his Trump glory days. Reuters joins the press in erasing news in favor of propaganda. CNN’s Brian Stelter, Oliver Darcy Say Legacy Media Outlets, Like The Washington Post, Have ‘Layers Of Protection’ Against ‘Bogus’ Stories. Fox News Has 'Parted Ways' with Anchor Who Trump Said Should Work at CNN.

Biden Raised The Price Of Drugs For Seniors & All Americans ... Media Ignored. CNN’s Oliver Darcy Talks Tough On TV But Watch What Happens When He’s Asked On Camera Over Allegations Of Propaganda. MSM Caught in Another MASSIVE LIE About Crime in Democrat Operated Area's. CBS caught editing out visible gun in Adam Toledo bodycam video. CBS Busted Photoshopping Gun Out Of Perp's Hand - Liberty One News.