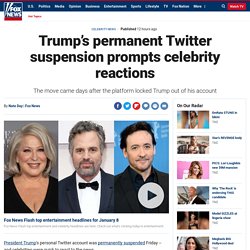 The ban came just days after Twitter locked Trump out of his account in response to the chaos that broke out in the Capitol on Wednesday, with Twitter saying at the time that his messages from that day were "violations of our Civic Integrity policy. " Throughout his tenure in the Oval Office and even before, celebrities have used Twitter to lambast the president, and on Friday, they took yet another swing at him in celebration of the news. "THANK YOU #TWITTER! " Bette Midler gleefully posted. "Please re-tweet! " "Thank you @Twitter & the board," said Mark Ruffalo. "This move by Twitter and Facebook are the biggest blows To his fascism," tweeted John Cusack, who also referenced Facebook, which blocked Trump's account "indefinitely" as well. Yvette Nicole Brown added: ". "Boom," Jeffrey Wright simply wrote alongside a screenshot of the now-defunct Twitter page. PARLER REMOVED FROM GOOGLE PLAY WITH VAGUE ‘INCITEMENT’ EXCUSE.

Google has REMOVED Parler from the Play store. 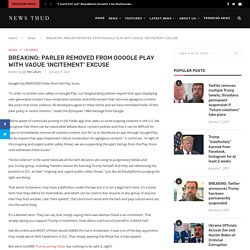 “In order to protect user safety on Google Play, our longstanding policies require that apps displaying user-generated content have moderation policies and enforcement that removes egregious content like posts that incite violence. All developers agree to these terms and we have reminded Parler of this clear policy in recent months,” reads the dystopian 1984 message from Google. “We’re aware of continued posting in the Parler app that seeks to incite ongoing violence in the U.S. We recognize that there can be reasonable debate about content policies and that it can be difficult for apps to immediately remove all violative content, but for us to distribute an app through Google Play, we do require that apps implement robust moderation for egregious content,” it continues.

“In light of this ongoing and urgent public safety threat, we are suspending the app’s listings from the Play Store until addresses these issues.” BIG TECH PURGE: Facebook permanently bans Conservative #WalkAway group because it supported Trump. Just as we said they would, Facebook is using the Capitol riot as an excuse to begin purging conservatives from their platform, especially the ones who supported President Trump: 🚨🚨🚨FACEBOOK has removed the #WalkAway Campaign and has BANNED ME and EVERY MEMBER of my team!!! 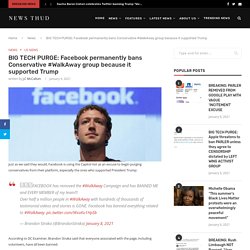 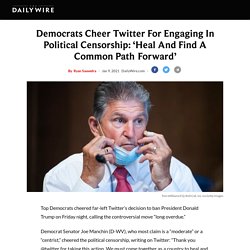 Democrat Senator Joe Manchin (D-WV), who most claim is a “moderate” or a “centrist,” cheered the political censorship, writing on Twitter: “Thank you @twitter for taking this action. We must come together as a country to heal and find a common path forward.” Far-left Rep. FRIDAY NIGHT TWITTER MASSACRE: Twitter Suspends "Trump Campaign Account. Twitter just suspended the official account of “Team Trump.” 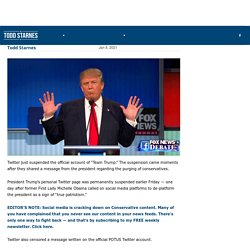 The suspension came moments after they shared a message from the president regarding the purging of conservatives. Bette Midler reacts to Trump being permanently suspended from Twitter "The happiest day of 2021" Moments ago, performer Bette Midler reacted to President Trump being permanently suspended from Twitter, calling it “the happiest day of 2021.” 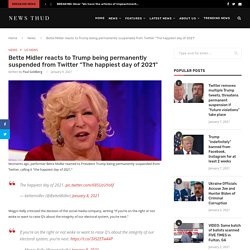 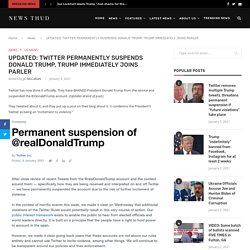 They have BANNED President Donald Trump from the service and suspended the @DonaldTrump account. (Updates at end of post.) They tweeted about it, and they put up a post on their blog about it. Massive purge on Twitter and Republicans say nothing. On the same day that Twitter banned POTUS, Apple, and Google (the only two app stores in the world) are colluding to ban Parler (Twitter’s only competitor). 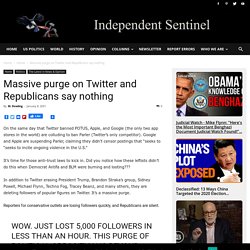 Google and Apple are suspending Parler, claiming they didn’t censor postings that “seeks to “seeks to incite ongoing violence in the U.S.” It’s time for those anti-trust laws to kick in. Did you notice how these leftists didn’t do this when Democrat Antifa and BLM were burning and looting??? In addition to Twitter erasing President Trump, Brandon Straka’s group, Sidney Powell, Michael Flynn, Techno Fog, Tracey Beanz, and many others, they are deleting followers of popular figures on Twitter. It’s a massive purge. Massive purge on Twitter and Republicans say nothing. Twitter Removes Trump Statement From Official POTUS Account As FNC's Tucker Carlson Reads it On-Air. DEVELOPING STORY: Moments after Twitter permanently suspended President Trump’s private account, they also targeted the president’s official government account. 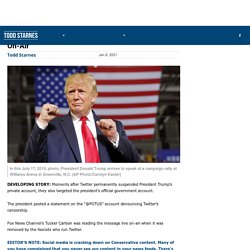 The president posted a statement on the “@POTUS” account denouncing Twitter’s censorship. Fox News Channel’s Tucker Carlson was reading the message live on-air when it was removed by the fascists who run Twitter. EDITOR’S NOTE: Social media is cracking down on Conservative content. Many of you have complained that you never see our content in your news feeds. Why ban of @realDonaldTrump proves Twitter not 'just a platform' So Twitter has “permanently banned” President Donald Trump’s account. 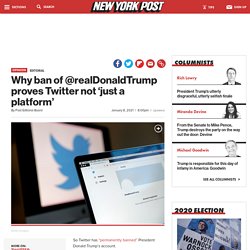 While this will please Democrats, and perhaps lessen the (justifiable) heat the company is taking from regulators, it just proves again that Twitter’s claims that it is “just a platform” is hogwash. Some of Trump’s tweets were untrue and incendiary, but so are the Ayatollah Khamenei’s. Twitter bans QAnon supporters, including former national security adviser Michael Flynn. Twitter has suspended prominent backers of the QAnon conspiracy theory, citing a potential for “offline harm.”

“We’ve been clear that we will take strong enforcement action on behavior that has the potential to lead to offline harm, and given the renewed potential for violence surrounding this type of behavior in the coming days, we will permanently suspend accounts that are solely dedicated to sharing QAnon content,” a spokesperson said. President Trump's Twitter Account Permanently Suspended: 'Risk of Further Incitement of Violence' Twitter Says They Were Very Concerned Because Trump Used Words Like "American Patriots" Before you read this story, I want to urge you to sign up for my free newsletter. It’s the only way to ensure that you are up-to-date on conservative news. We don’t know how long we will be allowed to post on Facebook, Twitter or YouTube. My newsletter is the only guarantee you have of getting around the Big Tech censors. Dan Bongino Locked Out of Twitter, Moving Exclusively to Parler.

President Donald Trump has been locked out of Twitter and Facebook “at least” until the end of his presidency. It’s a very dangerous and slippery slope when tech companies not only have more power than the President of the United States, but they actually have the power to silence the President; power which they gave to themselves. Many other conservative voices have been silenced and thousands of accounts shut down or blocked, all under the social media company’s self-determined “civic integrity” or “fraud” or “risk” just to name a few.

Conservative commentator Dan Bongino is amongst the latest high-profile victims, and he’s had enough. “F— these a—holes” exclaimed Bongino. Twitter permanently bans Trump, gies scorched earth on Conservatives - www.independentsentinel.com. Twitter on Friday permanently suspended President Donald Trump, citing his recent comments ahead of a mob of his supporters that stormed the Capitol. “After close review of recent Tweets from the @realDonaldTrump account and the context around them we have permanently suspended the account due to the risk of further incitement of violence,” Twitter’s official “Safety” account tweeted. Apple is threatening to ban Parler for not moderating content that led to the violence at the Capitol on Wednesday. Michelle Obama called for the permanent banning of President Trump, and they obeyed.

Andrew Yang, the former presidential candidate, wants the unfair Fairness Doctrine back and he wants it to apply to Cable. He is running for mayor of New York City and promotes communist policies. Lin Wood was banned permanently from Twitter this week, and that was followed by the suspension of attorney Sidney Powell and Lt. Twitter suspended President Donald Trump's account permanently - Business Insider.

BREAKING: Twitter Has Deleted President Trump's Account. Apple and Google face pressure to deplatform Parler over calls to violence. Apple and Google are facing new pressure to deplatform Parler, a social network founded as a less moderated and more conservative-friendly alternative to Facebook and Twitter. Late Friday, BuzzFeed News reported that Apple has given Parler 24 hours to put a moderation platform into place or be expelled from its App Store. Apple wrote to Parler executives Friday telling them it had received complaints about “objectionable content,” according to BuzzFeed, “accusations that the Parler app was used to plan, coordinate, and facilitate the illegal activities in Washington D.C. on January 6, 2021 that led (among other things) to loss of life, numerous injuries, and the destruction of property.

The app also appears to continue to be used to plan and facilitate yet further illegal and dangerous activities.” If Parler doesn’t comply, the app will be removed from the App Store. The group points out that both Google and Apple have clear rules against violent threats and moderation of content. Apple and Google face pressure to deplatform Parler over calls to violence. Parler given Ultimatum to implement "moderation plan" or be removed from Apple and Google platforms. (ETH) – Apple and Google are threatening to deplatform Parler, which is a social network founded as a less moderated and more conservative-friendly alternative to Facebook and Twitter. THE PURGE CONTINUES: Twitter Ban Michael Flynn And Sidney Powell From Their Platform. The Orwellian purge of conservatives and free speech has continued.

Twitter and Facebook have always looked for an excuse to purge the world of conservatives, and the protests in DC this week gave them that opportunity. sponsor Now, Twitter has completely banned Sidney Powell and Michael Flynn from their platform for no good reason whatsoever: According to the leftist social media website, they got banned for "coordinated harmful activity", which doesn't even apply to them: Michael Tracy makes the point that these loose rules could be made against anyone they personally deem to be harmful, with no accountability:

Social media company Buffer cancels LifeSite account for unspecified ‘violation’ Shopify Bans Trump Webstore. On 7th January 2021 @ 9.00pm © press Shopify, the popular e-commerce store provider, has blacklisted the Trump campaign and Trump organization, according to reports. TrumpStore.com was banned by the shopping platform on Thursday, The Wall Street Journal reported. The removal comes in line with other platforms that have banned or suspended Trump following the events in Washington D.C. this week. GROTESQUE CENSORSHIP: Big Tech Purging President Trump From Multiple Platforms. President Trump Responds. Due to heavy handed Deep State censorship, President Trump was forced to issue a formal statement through the Twitter account of his Deputy Chief of Staff, Dan Scavino. There will be “a peaceful transition of power.” Zuckerberg will block Trump indefinitely from Facebook and Instagram.

Facebook, Instagram block Trump for ‘at least’ the rest of his presidency. Facebook blocks President Trump from posting to his account. (ETH) – Facebook has just announced that they have made the decision to block posts from President Donald Trump for the remainder of his term. According to CNBC, the decision came as Facebook CEO Mark Zuckerberg said the company would block Trump from posting from his account for an indefinite amount of time and at least until President-elect Joe Biden assumes the Oval Office. According to the report, The decision was a result of the unrest and takeover of the US Capitol during yesterday’s electoral process. Facebook has blocked President Trump indefinitely - Business Insider. Twitter removes multiple Trump tweets, threatens permanent suspension if "future violations" take place. Facebook. Twitter removes tweets from President Trump, locks his account. Facebook Bans GOP Account While Allowing DNC to Post ANYTHING.